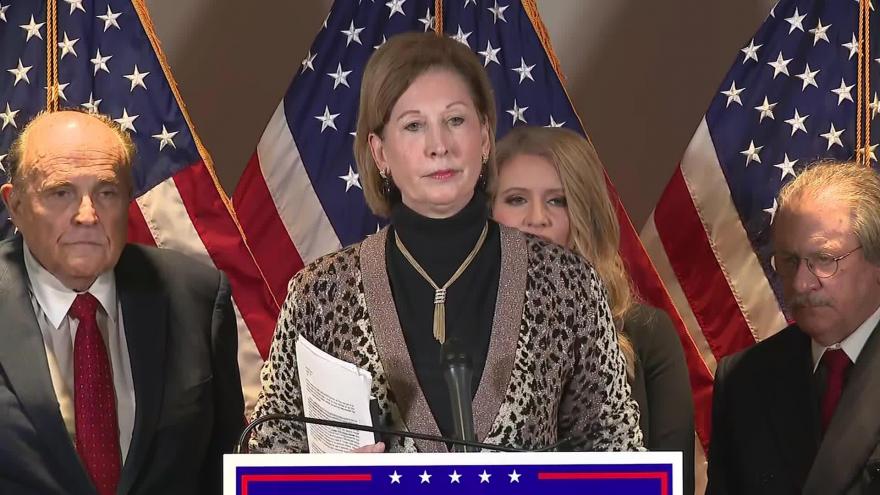 A federal judge ordered sanctions for Sidney Powell, Lin Wood and several other lawyers who worked on Trump-aligned lawsuits seeking to challenge the results of the 2020 election.

(CNN) -- A federal judge ordered sanctions Wednesday for Sidney Powell, Lin Wood and several other lawyers who worked on Trump-aligned lawsuits seeking to challenge the results of the 2020 election.

US District Judge Linda Parker, of the Eastern District of Michigan, said the lawyers had "engaged in litigation practices" that were "abusive and, in turn, sanctionable."

"Sanctions are required to deter the filing of future frivolous lawsuits designed primarily to spread the narrative that our election processes are rigged and our democratic institutions cannot be trusted," the judge wrote in a 110-page opinion.

Parker is ordering the lawyers to reimburse the attorneys' fees that the city of Detroit and Michigan state officials paid in seeking the sanctions. The lawyers must also take legal education classes, the judge said, and she is referring her decision to the Michigan Attorney Grievance Commission, and "the appropriate disciplinary authority for the jurisdiction(s) where each attorney is admitted," for potential disciplinary action.

Wood referred CNN to his attorney when asked for comment. Powell and the attorney who was representing them in the sanctions dispute did not immediately respond to emails from CNN requesting comment.

Michigan Gov. Gretchen Whitmer, a Democrat, praised the judge's ruling on Wednesday, saying in a statement that it "sends a clear message: those who seek to overturn an American election and poison the well of American democracy will face consequences."

The lawsuit filed in Parker's court last November by Powell, Wood and others was one of dozens of suits brought last year as part of an early, major attempt by then-President Donald Trump to claim that the presidential election results in November were illegitimate. His team and supporters lost all of their attempts in court to gain traction on voter fraud.

Last month, Parker grilled the attorneys over their election fraud claims during a six-hour hearing in which her line-by-line questioning yielded a painstaking recounting of the thinness of those claims.

The city of Detroit -- whose lawyer had argued that the Trump lawsuit was solely meant to spread lies about the election -- as well as the state of Michigan had asked the federal court to sanction the lawyers who had brought the case.

The punishments handed down on Wednesday are not the first for a pro-Trump attorney who brought election-related lawsuits. Earlier this summer, Washington, DC, and New York state temporarily suspended Rudy Giuliani's law license for pushing election lies.

This story has been updated with background information and further developments.