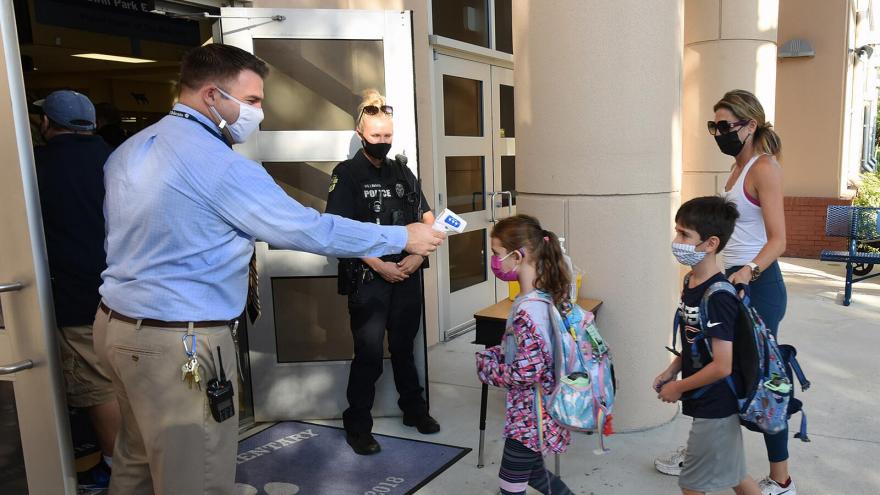 The court said that under the law the defendants "did not have the authority for a blanket mandatory ban against face mask policy, that does not provide a parental opt-out. They simply do not have that authority," the judge said.

Judge Cooper cited evidence presented, including Centers for Disease Control and Prevention recommendations for universal masking of students and teachers. He called the health care agency "the gold standard" as part of his decision.

One of the plaintiffs, Lesley Abravanel of Boca Raton, said she was elated.

"The judge clearly went on the side of science and medicine and our children and democracy," Abravanel said during a virtual news conference. "It was madness that we even had to sue the governor to get to this point, but I mean we did. And we prevailed. Thankfully the facts matter."

Attorney Charles Gallagher called the ruling, "significant in protecting the rights of children in Florida across the board."

A spokesperson for DeSantis issued a statement saying the state will appeal the judge's decision.

"It's not surprising that Judge Cooper would rule against parent's rights and their ability to make the best educational and medical decisions for their family, but instead rule in favor of elected politicians. This ruling was made with incoherent justifications, not based in science and facts -- frankly not even remotely focused on the merits of the case presented."

The ruling comes after a four-day hearing in the case of parents from Miami-Dade, Orange, Hillsborough, Palm Beach, Pinellas and Alachua counties who filed a lawsuit against DeSantis, Florida Commissioner of Education Richard Corcoran, the Florida Department of Education, and the Florida Board of Education over the executive order banning mask mandates in schools.

The ruling comes as a growing number of Florida school districts have issued local mask mandates that do not include a parental opt-out, as is required by the governor's executive order.

"While we are sure this is the first of many legal proceedings, the judge in this case basically echoed what Superintendent Hanna said to the school board Tuesday night: that we were in compliance with the Parents Bill of Rights," said Chris Petley, Leon County Public Schools communications coordinator.

"The actions of this school board when they adopted mandatory face coverings in schools is consistent with the judge's ruling. We will continue to make the health and safety of students and staff top priority," Hillsborough County Public Schools said in part in a written statement to CNN.

So far, the Florida State Board of Education had said it will cut funding to 2 of the 10 counties that issued mask mandates, Broward and Alachua.

The US Secretary of Education sent a letter to the districts last Friday stating that any financial penalties could be covered with federal dollars. It is unclear what effect -- if any -- cutting funds would have on the districts.

The legal team representing the parents suing the state has scheduled a news conference for Friday.

A spokesperson for the Florida Department of Education echoed DeSantis' statement saying the ruling conflicts with parental rights.

"We will continue to fight to make sure every child has access to education. We are committed to the fundamental rights of parents and will push forward on appeal to ensure that this foundation of democracy is upheld," the department said in the statement.