Judge orders an Iowa teen who killed her alleged rapist to pay his family $150,000 in restitution 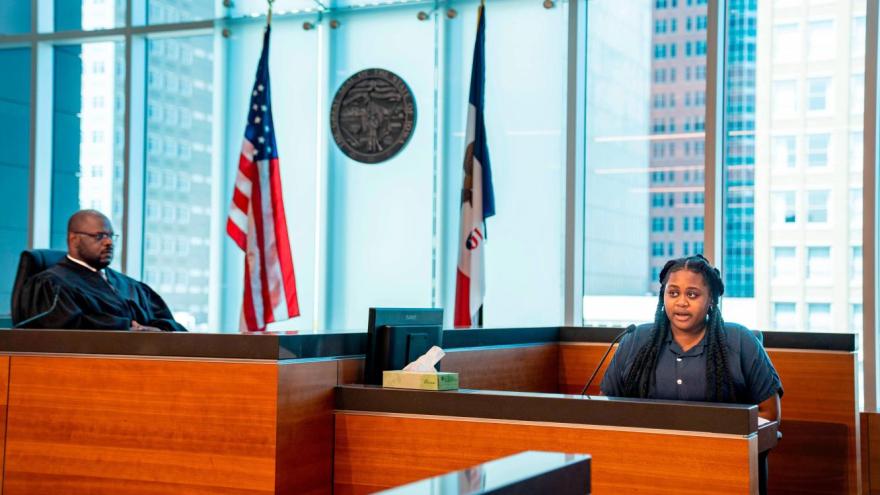 Pieper Lewis gives her allocution during a sentencing hearing, Tuesday, Sept. 13, in Des Moines, Iowa. Lewis, who was initially charged with first-degree murder after she stabbed her accused rapist to death in June 2020, was sentenced to five years of closely supervised probation and ordered to pay $150,000 restitution to the man's family.

(CNN) -- A girl who was 15 when she killed a man she said raped her multiple times must pay his family $150,000 in restitution, an Iowa judge ruled Tuesday.

Porter ruled Lewis would receive five years' probation, serve 200 hours of community service and pay $150,000 in restitution, plus more than $4,000 in civil penalties. The deferred judgment means this may be expunged from Lewis' record.

Iowa law requires the court to sentence offenders to pay at least $150,000 in restitution if they kill another person.

A crowdsourcing campaign to cover the restitution has raised $330,000 -- more than double what Lewis owes. But Lewis' attorneys must determine whether Iowa law would allow the donated money to be used to pay the restitution, they told Des Moines Register.

Money collected beyond the court-ordered sum would help Lewis attend college, start her own business and "explore ways to help other young victims of sex crimes," her former teacher Leland Schippe wrote at the GoFundMe page he set up.

Lewis pleaded guilty in June 2021 to the killing of Zachary Brooks. According to the plea agreement, Lewis said Brooks, 37, raped her multiple times in 2020. She was initially charged with first-degree murder.

Lewis said in the plea agreement that she ran away from home several times and ended up sleeping in the hallway of an apartment complex.

One man took her in, but she left when he became abusive, she wrote in the plea agreement. She said she then moved in with another man who created an online dating profile for her and arranged for men to have sex with her for money. She lived with that man, who told her she was his girlfriend, from April 2020 until she was arrested for killing Brooks, Lewis said.

She was introduced to Brooks in May 2020, and he gave her alcohol and marijuana and had sex with her five times while she was unconscious over a three-day period, she said in her plea. She said she learned of what he had done, according to the plea, each time she regained consciousness and he was still on top of her.

On May 31, the man with whom Lewis lived with confronted her with a knife after she refused his order to go to Brooks' apartment to have sex with Brooks in exchange for marijuana, she wrote. Eventually she agreed to go after he cut her neck, she said in the plea.

Brooks picked her up and drove her back to his apartment, where he told her to go to the bedroom.

She was forced to drink vodka shots and fell asleep, she wrote in her plea agreement. At one point in the night she woke up and Brooks was raping her, she said. Brooks fell asleep and Lewis went to find her clothes. When she came back to the bedroom, she saw him passed out naked, she wrote.

"I suddenly realized that Mr. Brooks had raped me yet again and was overcome with rage. Without thinking, I immediately grabbed the knife from his nightstand and began stabbing him," Lewis stated in the plea agreement. "I further acknowledge that the multiple stab wounds that I inflicted upon Mr. Brooks thereafter ultimately resulted in his death."

In court on Tuesday, Lewis read from a statement.

"My story can change things. My story has changed me," she said. "The events that took place on that horrific day cannot be changed, as much as I wish I could. That day a combination of complicated actions took place resulting in the death of a person, as well as a stolen innocence of a child.

"As I grow and evolve as a young woman, I feel for the victim's family. I wish what happened never did. And I truly feel that way. The healing process is inevitable. I repeat, I wish the events that occurred on June 1, 2020 never occurred. But to say there is only one victim of this story is absurd."

Lewis' attorney said that he was pleased with the court deferring her sentence.

"We are very thrilled by Judge Porter's decision in the case. A deferred judgment will allow Pieper to live a full life," Matt Sheeley told CNN.

"Pieper is extremely grateful for all the love, compassion, and support that she has received. Anyone that has met her immediately falls in love with her," Sheeley said. "She's a remarkable young woman who has remarkable courage. And she's amazed at all the love she's received -- she's just blown away. We're all frankly blown away."

Explaining his decision to order community service, Porter said: "The purpose of that, Ms. Lewis, is that you have a story to tell ... you should be willing and able to tell that story to other young and vulnerable women in our community. And therefore, you are going to give back ... by the way of community service hours."

Sheeley did not say if they planned to appeal the restitution decision in the case.

KellyMarie Meek of the Iowa Coalition Against Sexual Assault said she was concerned about Tuesday's ruling.

Meek also expressed concern about Lewis' ability to manage the terms of her probation due to the severity of her trauma.

"Five years (of) probation under strict supervision is something that concerns me, because I know that many of the ways that trauma survivors deal with their trauma is not understood very well by folks that haven't experienced trauma, which can sometimes lead to behaviors that get folks in trouble," she said.

Meek said she understood the restitution ruling and the fact the judge didn't have any discretion.

"It worked out really poorly in this case, but I don't want to automatically swing the pendulum and say, we're just going to get rid of that," she said.

Many victims' families fought hard to get the restitution law passed, she said, adding what is needed now is discussion with "a lot of voices at the table to figure out how we get victims of crime the support that they need and not unfairly punish people."