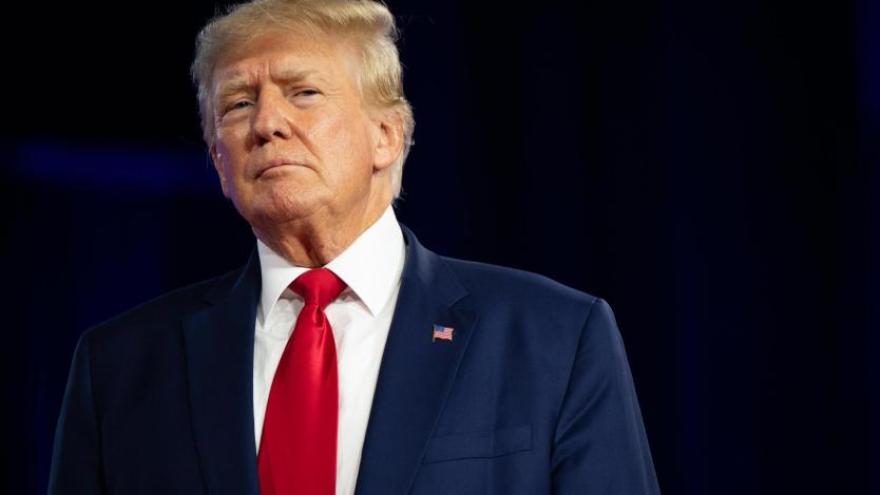 A federal judge in Florida has given former President Donald Trump until August 26 to refine the legal arguments in his request for a special master to oversee the review of evidence gathered in the Mar-a-Lago search.

(CNN) -- A federal judge in Florida has given former President Donald Trump until Friday to refine the legal arguments in his request for a special master to oversee the review of evidence gathered in the Mar-a-Lago search.

District Court Judge Aileen Cannon in the Southern District of Florida ordered Trump's lawyers to elaborate on their arguments for why the court has the ability to step in at this time, explain what exactly Trump is asking for and whether the Justice Department has been served with Trump's special master motion.

Cannon also asked Trump's team to weigh in on any effect the request might have on a separate review conducted by a magistrate judge into whether any portions of the still-sealed FBI affidavit laying out probable cause for the search can be released.

"What's she saying is, 'What are you doing in front of me?'" Mark Schnapp, a criminal defense lawyer in Florida who spent seven years working for the US Attorney's Office for the Southern District of Florida, told CNN.

Generally speaking, it is not outside the legal norm for Trump to want a special master involved in the review of the evidence seized from his Florida residence. His former lawyer, Michael Cohen successfully sought the appointment of a special master when Cohen's office and residences were searched by the FBI in 2018.

But Trump waited two weeks to make such a request, raising eyebrows because of how far along in the process the Justice Department likely is in reviewing what it seized at Mar-a-Lago. (For the review, the Justice Department is using what's known as "taint team," which is a group of prosecutors not working on the probe in question who filter out materials that should not be handed over to investigators.)

And when Trump did file his request with the court, the complaint leaned heavily into political accusations, while being light on the sort of legal discussion that would explain to a court why it should intervene and what authority it had to do so. When Trump's lawyers did cite the court rules they said gave the judge the authority to grant the request, they cited the rules of civil procedure, without any explanation for why those rules should be applied in a context concerning a criminal search warrant.

Trump also did not file with the complaint the kind of separate request -- such as a motion for a temporary restraining order or a preliminary injunction -- that would have sped up the timeline for the judge to consider what Trump was asking for.

Nor did Trump's legal team file any declarations -- i.e. statements from the lawyers who were said to have interacted with the Justice Department in the lead-up and after the search -- to back up the complaint's factual assertions.

Instead, the complaint retread allegations about the FBI's investigation into Russia's 2016 election interference, while sensationally suggesting that the DOJ's actions were motivated by a desire to hinder a Trump 2024 presidential run. It also included the full text of a warning Trump supposedly sought to deliver through his lawyers to Attorney General Merrick Garland.

Trump's move to file a separate case that was assigned to Judge Cannon, rather than file the request with the magistrate judge who signed off on the warrant, also prompted confusion among outside legal experts. It appears that Trump's lawyers even ran into procedural issues with the filing of the lawsuit and with their attempts to enter appearances in the case.

The clerk posted one notice on the docket indicating that the complaint had been "filed conventionally" when it "should have been filed electronically," according to the court's local rules.

Another notice from the clerk indicated that the Trump attorneys who were seeking special admission to enter appearances in the case because they were not barred in Florida also failed to follow the local rules in doing so. They were given another chance to enter their appearances correctly.