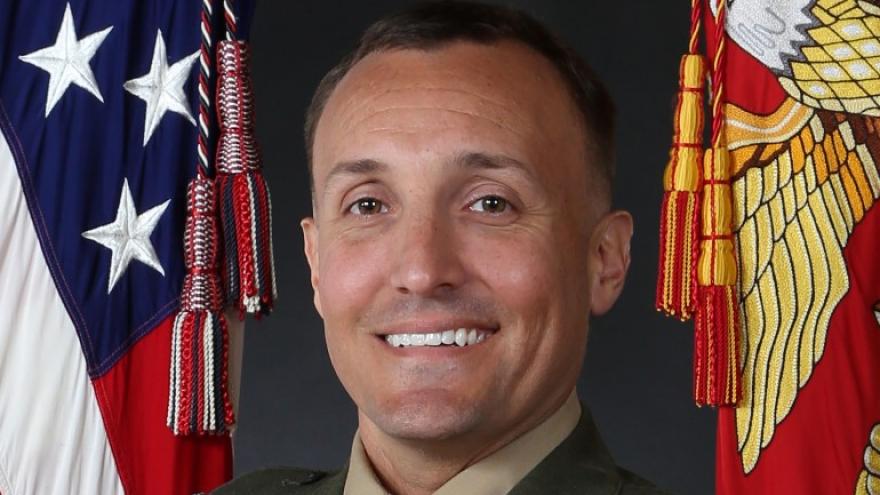 Marine Corps Lt. Col. Stuart Scheller, who posted videos on social media criticizing top military leaders' handling of the US withdrawal from Afghanistan, pleaded guilty to six charges in a military court at Camp Lejeune, in North Carolina, on October 14.

(CNN) -- A US military judge found a Marine who had posted videos on social media criticizing top military leaders' handling of the US withdrawal from Afghanistan guilty on five charges Thursday in a military court at Camp Lejeune in North Carolina.

Marine Corps Judge Col. Glen Hines found Lt. Col. Stuart Scheller guilty after he entered guilty pleas to all five charges he faced -- including "contempt towards officials," "disrespect toward superior commissioned officers" and "failure to obey order or regulation" -- after videos of Scheller criticizing military leaders about their handling of the withdrawal went viral.

Scheller appeared in the courtroom in his Marine Corps uniform, flanked by his military attorney and his private attorneys, sitting at a small table in front of the judge.

During the special court-martial Hines went through each charge, restating what Scheller had said in each of the social media posts and videos he had posted over a monthlong period, starting with a video on August 26 criticizing top military leaders' handling of the Afghanistan withdrawal.

Scheller's social media posts criticized top generals' choices, including their decision to close Bagram Air Base before Americans and Afghans had been evacuated from the country. In subsequent posts, he criticized the politicization of the Marine Corps and said that "together we'll take the whole f***ing system down." In another post, he commented that "you have no idea what I'm capable of doing."

In court Thursday, Scheller described his distress after he had posted the first video. His wife left him, he had sacrificed his retirement benefits by publicly criticizing senior military officials before he had reached 20 years of service and his small business suffered, he said. He described his life as "spiraling" in the weeks after the first video was posted.

Scheller was ordered to get a mental health evaluation after his initial posts. In an unsworn statement to the judge, he said he felt the Marine Corps was trying to discredit him after he posted his first video, by saying he was suicidal and mentally unwell and by attempting to argue that he supported the January 6 insurrectionists.

As for why he continued to post the videos after he was relieved of his command and being investigated, "I wanted other service members to see that it's normal to get mad ... it's normal to cry," Scheller said.

He complained to the judge that his medical records had been leaked to the media, saying he was "deeply heartbroken" about it and viewed it as another attempt by the Marine Corps to discredit him.

Before the judge handed down his guilty verdict, he asked Scheller one final time if he believes he is guilty of all of the charges.

"Yes, sir. I am guilty, and I am accepting accountability," Scheller said.

Consequences for speaking out

Scheller, who has been in the Marine Corps since 2005, faces a maximum sentence of forfeiting two-thirds of his pay for up to 12 months and a letter of reprimand when he is discharged as part of a plea deal entered in court. According to the terms of the deal, Scheller will either receive an honorable discharge or a general discharge under honorable conditions. The secretary of the Navy will decide which discharge he receives.

Because Scheller made these statements and will leave the Marine Corps before he hits 20 years of service, he will not receive retirement benefits. If he receives a discharge that is other than honorable, he will lose some military benefits as well.

After the judge ruled that Scheller was guilty on all counts, defense attorneys called witnesses to testify on behalf of Scheller's character and service during his years in the Marine Corps.

Both representatives do not personally know Scheller but said they had received calls from constituents who were concerned about his situation after seeing the videos online and hearing he had been charged for criticizing military leaders' handling of the withdrawal. The representatives pointed to what they called a "double standard" where Chairman of the Joint Chiefs of Staff Gen. Mark Milley was able to publicly criticize former President Donald Trump and talk to reporters, but Scheller is being punished for speaking out.

Calling out the secretary of defense

When Hines asked Scheller why he had posted the first video, Scheller said the "secretary of defense made decisions that led to the failure in the withdrawal of Afghanistan."

Later in the hearing, Scheller said he had decided to post the videos because he knew that if he tried to say something through the proper channels, his message would not reach Secretary of Defense Lloyd Austin, Milley or other senior military leaders.

The first video was directed at Austin, Scheller said. "To me, military leaders have an obligation to stand up for what they believe is right," he told the judge.

Scheller said that sometimes military leaders need to have the "moral courage" to do that.

The judge asked if Scheller was calling out Austin when he said the secretary should "throw his rank on the table" in the first video. Scheller said he was.

Scheller's first video was posted the same day that 13 US service members and more than 170 others were killed in an attack outside Kabul's airport, according to the Pentagon and Afghanistan's Ministry of Public Health.

He appeared in uniform in the first video and in subsequent videos he posted on his Facebook page during September.

Scheller was ordered to stop posting on social media by his senior officer, Col. David Emmel, on September 17. He continued to post the week after he signed the order barring him from posting, which he referred to as a gag order in court. In one of his final posts before being sent to pretrial confinement, Scheller said he was ready to go to jail, telling Emmel to have the Marine police waiting for him Monday morning.

Scheller was in pretrial confinement, known as the brig, for nine days at the Regional Brig for Marine Corps Installations East at Camp Lejeune. He was released on October 5, according to a US Marine Corps news release.

"I did think I was imprisoned illegally, but I think this course of action is best," Scheller told the judge when asked why they did not submit a motion challenging his confinement.

While Scheller ultimately pleaded guilty to disobeying the "gag order," he hesitated noticeably before responding when initially asked by Hines.

The judge asked Scheller if he understood that, as an active-duty Marine, some of his First Amendment rights could be restricted. Scheller responded that he did.

When Hines asked Scheller if he believed the order was "necessary to safeguard" the order of the Marine Corps, Scheller responded, "I believe that's what Col. Emmel believed."

'I willfully disobeyed an order to tell hard truths.'

Scheller later admitted to disobeying the order and pleaded guilty to the charge.

When Hines asked Scheller if he believed he was guilty of the charge of "dereliction of duty," Scheller responded, "I willfully disobeyed an order to tell hard truths."

In a Facebook post on September 25, Scheller said he didn't want or need help from Trump, who was trying to weigh in on his behalf.

"President Trump, I was told by everyone to kiss the ring because of your following and power. I refuse," Scheller wrote on Facebook. "I hate how you divided the country. I don't need or want your help ... tell your son to stop tweeting about me."

"Your whole family knows nothing about US or our sacrifices. I could never work with you," Scheller wrote in the same post. "I'd rather sit in jail and be released with a dishonorable than make compromises in my beliefs."

After the first video was posted, Marine Corps spokesperson Maj. Jim Stenger said in a statement that Scheller had been relieved of command "due to a loss of trust and confidence in his ability to command."

"This is obviously an emotional time for a lot of Marines, and we encourage anyone struggling right now to seek counseling or talk to a fellow Marine. There is a forum in which Marine leaders can address their disagreements with the chain of command, but it's not social media," Stenger said.

This story has been updated with additional developments and to reflect Scheller faced five charges rather than six as was stated earlier on a military press release.