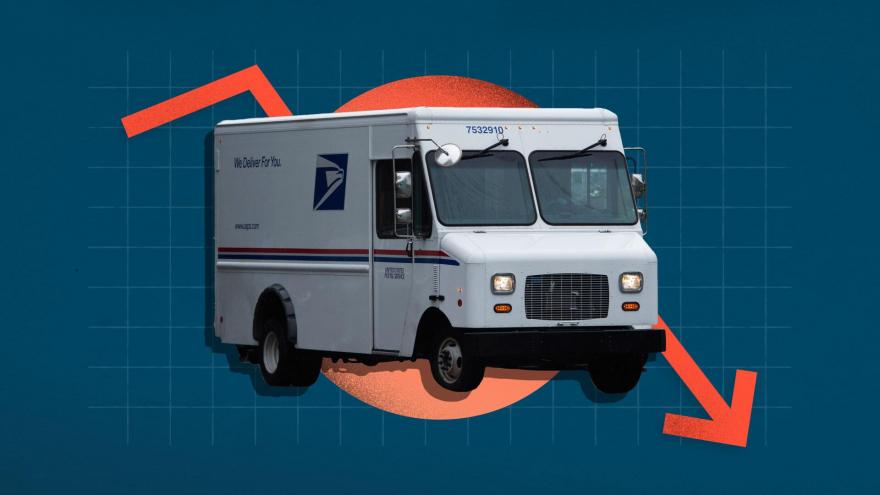 Since 2007, the US Postal Service has struggled to make a profit.

(CNN) -- Two federal judges have increased their oversight of the US Postal Service's operations as Election Day approaches, with an order coming from one judge late Friday intended to improve ballot mail delivery in parts of Michigan and Wisconsin.

Another federal judge is considering Saturday whether the US Postal Service should take even more steps before Election Day so absentee ballots can be delivered quickly and before voting deadlines.

The Postal Service's delivery performance in the days before the presidential election has become a major point of contention -- especially in the battleground states where thousands of voters are mailing ballots instead of visiting polling places in person because of the coronavirus pandemic -- and Democratic state leaders and other voting access groups have pushed for judicial oversight of the agency's work.

Stanley Bastian of the Eastern District of Washington state ordered Friday night that the US Postal Service ​report to him daily on their nightly sweeps for election mail in the Lakeland region of Wisconsin and in the Detroit area. He told the Postal Service they must "make every effort" to deliver any mailed-in ballots it finds in these facilities by 8 p.m. on Election Day.

A group of Democratic-led states that had sued the USPS had notified the judge of "consistently poor Election Mail performance data in certain regions."

This comes as the USPS faces intense scrutiny in multiple courts regarding its efficiency and problems delivering absentee ballots by Election Day.

Top officials from the Postal Service are set to testify on Saturday afternoon in a separate court proceeding in Washington, DC.

In that case, federal Judge Emmet Sullivan has held daily hearings on the Postal Service's performance and put under court order the Postal Service's pledge to take "extraordinary measures" to collect some mail this Sunday that it normally would not, among other efforts before Election Day.

But the judge questioned whether the expanded operations could happen even sooner, on Saturday, or if more could be done.

Sullivan indicated he may put an additional order on the Postal Service so that "American voters' ballots are processed and delivered in a timely manner," he said late Friday night at the end of a three-hour hearing about the Postal Service's efforts to deliver ballots before Election Day.

Since Monday, the USPS has handled more than 7.1 million ballots, according to court documents -- well over 1.5 million each day.

Sullivan's extraordinary attention to the US Postal Service -- which has included daily hearings and requiring data reports about mail processing this week -- comes four days before the election, in which millions of Americans plan to or already have voted by mail.

Plans for the next days

At times, Sullivan's questioning of a top USPS retail and delivery operations official, Kristin Seaver, who testified Friday, focused on whether the Postal Service had hired enough staff to handle the election mail onslaught.

Seaver didn't provide exact numbers but said the Postal Service had boosted staffing and was seeing increases in letter mail because of the election and in packages because of more orders due to the pandemic. She said staffing increases are comparable to what they may be for the holiday season.

On Friday, the USPS said it will collect mail on Sunday for some routes (there is typically no Sunday collection), and conduct early collections on Monday and Tuesday with ballot delivery to election offices on the same day. Carriers will also check for outgoing mail at "every residential mailbox" and post offices will set up special lanes for people to drop off ballots.

Sullivan put the force of the court behind the Postal Service's "extraordinary measures" plans on Friday afternoon, certifying them with a judicial order.

In some key battleground states, the Republican Party has contested the validity of ballots that voters mail before Election Day but are delivered to election officials later -- making the Postal Service's efforts in the coming days key to getting votes in on time to be counted.

The Postal Service has faced intense political criticism, and several lawsuits and court orders, after it planned policy changes that could slow down the mail. Postmaster General Louis DeJoy also has weathered inquiries related to his close ties to President Donald Trump, who's attempted to sow distrust in mail-in voting, which Democratic voters are expected to use more widely than Republicans, according to polling.

Sullivan, who's well known in Washington for his skepticism of the executive branch and experience handling politically sensitive cases, praised the Postal Service's employees and its managers for their professionalism and hard work on Friday. He called it a "Herculean effort to make the system work" and offered a "judicial shout-out" to postal workers to mark his admiration.

He also encouraged the public visiting post offices, "If you see something, say something."

The US Postal Service announcement earlier Friday detailed several "extraordinary measures" it is implementing aimed at making sure mail-in ballots are delivered in time to get counted -- as new court filings showed that the agency moved fewer ballots on-time in critical battleground states on Thursday than it did the previous day.

In addition to plans to process more mail on Sunday and collect ballots more promptly from voters in the coming days, the USPS said it will try to intercept any ballots with misprinted bar codes that determine where the mail is funneled through the USPS system. If these issues are caught early, it would speed up processing times.

Meanwhile, court filings on Friday and Saturday show that the agency was slower to move ballots on time in key states than it had been previously and elsewhere.

For the second day in a row, the Postal Service moved fewer ballots on-time in critical battleground states than it did in the previous day, according to new court filings. The USPS blamed staffing shortages caused by Covid-19 and an increase in package volume for the delays.

The slowdown in key states also dragged down national processing scores, which measure how many ballots were moved through the postal system on time. The number for completed ballots being returned to election offices dropped on Thursday and on Friday, as did the number of blank ballots still heading to voters.

In court, lawyers for the Postal Service and Seaver have repeatedly emphasized that further orders from the court to increase service may be difficult to implement, and that all of the 440,000 postal employees know it's "all hands on deck" to deliver ballots on time, to count on November 3.

Because Election Day is only days away, these processing scores are taking on even greater importance. Dips in performance could mean ballots don't arrive at election offices in time to get counted. In more than half of the states, mail ballots don't count if they arrive after the polls close.

The numbers in some of the most critical battleground states did not improve substantially or dropped even lower.

The Colorado and Wyoming district sank to the lowest in the nation, moving only 61% of ballots on time Friday. Even more concerning, only 80% of Colorado and Wyoming ballots arrived three days after they were supposed to. Nearly all Coloradans vote by mail because the state sends every voter there a ballot through the mail.

Only 76% of the ballots processed by USPS in Northern New England, which includes New Hampshire and Maine, were done so on-time.

One apparent issue bubbled up on social media on Friday after a series of tweets about a mail backlog by a Democrat state lawmaker in Florida has led to a search for ballots by postal inspectors and a call by the Miami-Dade state attorney for an area-wide audit of all postal distribution centers.

Sullivan in Washington, DC, took interest in the situation, after receiving calls to his office and seeing a video on Twitter of mail stacked up.

Their investigation also initially turned up 48 pieces of election mail, and the lawyers said in court that an effort is underway to make sure the ballots get delivered.

Four of the ballots that were found were heading to local residents, and were delivered yesterday, the lawyer said.

Three of the ballots were out-of-state ballots, and USPS says they were sent through the Express Mail system -- guaranteed by USPS to arrive in one to two days.

The USPS defines election mail as, "any item mailed to or from authorized election officials that enables citizens to participate in the voting process — including ballots, voter registration cards, absentee voting applications and polling place notifications."

The Inspector General's office says it has briefed the US Attorney for the Southern District of Florida of its initial findings.

The Postal Service also confirmed their investigation is still ongoing, and that they had moved employees and cargo facilities to that area.

The issue at the post office in Florida came to light when Kionne McGhee, the minority leader of the Florida state legislature posted unsourced, undated video on his Twitter feed showing stacks of bins filled with mail. McGhee wrote he obtained the video from a "source" and told CNN it was recorded by a Postal Service employee last Saturday.

This story has been updated with additional reporting on Saturday.