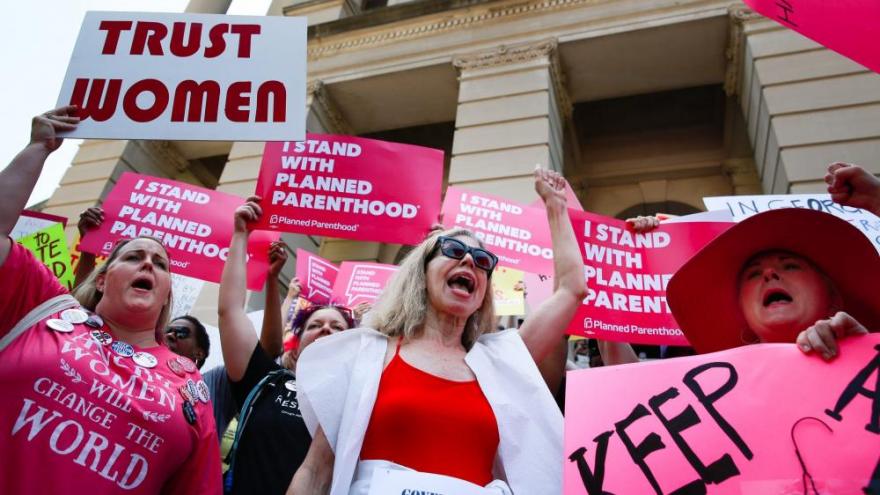 A federal judge has temporarily blocked Ohio's "heartbeat" bill banning abortions as early as six weeks into a pregnancy from going into effect.

(CNN) -- A federal judge has temporarily blocked Ohio's "heartbeat" bill banning abortions as early as six weeks into a pregnancy from going into effect.

Judge Michael Barrett on Wednesday barred Senate Bill 23 while he considers the lawsuit challenging the measure filed by Planned Parenthood and the American Civil Liberties Union in May.

The law, which bans abortions once a fetal heartbeat is detected and was signed by Republican Gov. Mike DeWine in April, was scheduled to take effect next week. The measure includes exceptions only to prevent the woman's death or serious physical impairment, and could slap providers who violate the law with a one-year prison sentence and $2,500 fine.

The decision signals hope for abortion rights advocates who have challenged several recent states' laws restricting access to the procedure, setting up a possible reckoning for Roe v. Wade, the landmark 1973 Supreme Court ruling that legalized abortion nationwide. The ACLU and Planned Parenthood sued Alabama in May and Arkansas and Georgia last week, while the American Medical Association sued North Dakota on Tuesday.

Should the Ohio law have gone into force, "one could characterize the obstacle Ohio women will face as not merely 'substantial,' but, rather, 'insurmountable,'" Barrett wrote.

Barrett also implied that he would rule against Ohio, writing that the law appeared to be unconstitutional.

"The Court concludes, based on current United States Supreme Court precedent, that Plaintiffs are certain to succeed on the merits of their claim that S.B. 23 is unconstitutional on its face," he wrote.

Barrett also noted that "thus far, all other attempts by states to ban abortion beginning at the detection of cardiac activity have been invalidated."

Ohio Attorney General Dave Yost, who was named as a defendant in the suit along with other state officials, pointed to Casey as an outdated standard.

"This was anticipated. Casey's elastic legal standard is ripe for review," he said in a statement. "This office will fulfill its duty to defend the laws passed by the elected representatives in the General Assembly."

"Let this victory for Ohio women stand as a reminder that these attacks on abortion access are illegal," she said in a statement. "We will continue to work within the courts to hold anti-abortion state legislators accountable as long as they abuse their power to push abortion out of reach."