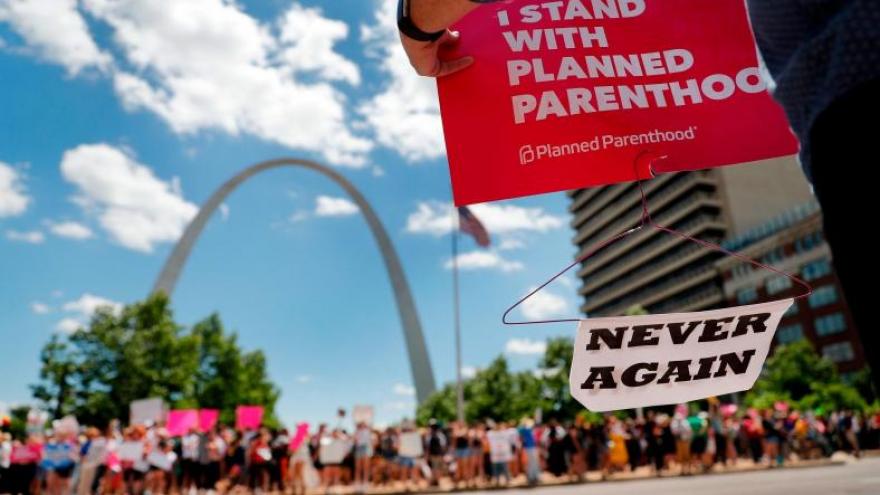 A federal judge on Tuesday blocked a Missouri law banning abortions after eight weeks from going into effect.

(CNN) -- A federal judge on Tuesday blocked a Missouri ban on abortions after eight weeks from going into effect.

"The various sections specifying prohibitions on abortions at various weeks prior to viability cannot be allowed to go into effect on August 28, as scheduled," writes US District Judge Howard Sachs in an 11-page opinion.

"However formulated, the legislation on its face conflicts with the Supreme Court ruling that neither legislative or judicial limits on abortion can be measured by specified weeks or development of a fetus; instead, 'viability' is the sole test for a State's authority to prohibit abortions where there is no maternal health issue," Sachs wrote.

Tuesday's ruling comes after two other federal judges blocked similar abortion restrictions in Arkansas and Ohio earlier this summer, as a slew of state laws looking to challenge Roe v. Wade, the 1973 landmark ruling legalizing abortion nationwide, make their way through the courts.

The Missouri law in question would penalize medical professionals who perform abortions after eight weeks into a pregnancy -- before many women know that they are pregnant, and well before the 24-week viability standard established by Roe -- with up to 15 years in prison. The law does not include exceptions for instances of rape or incest, only for instances of "medical emergency," such to prevent a pregnant woman's death or "substantial and irreversible physical impairment."

Alexis McGill Johnson, acting president and CEO of Planned Parenthood, praised the ruling and vowed to continue to fight the law in court.

"Today's decision blocks a harmful law that bans abortion before many know they're pregnant," she wrote in a statement. "What little abortion access in Missouri is left, will stay in place for the time being."

"Let's be very clear: these severe restrictions on abortion access do nothing to address disability rights or discrimination," Johnson added. "They only stigmatize abortion and shame the people who seek that care."

Republican Gov. Mike Parson praised the court decision to uphold sections of the law preventing abortions based on sex, race or Down syndrome, which are separate from the eight-week ban struck down by the judge. He said the state would continue to argue its case on the ban.

"We sent a strong message that Missouri stands for life, protection of women's health, and advocates for the unborn with the passage and signing of HB 126," Parson said in a statement. "We are encouraged that today's court ruling upheld the anti-discrimination provisions of the law, and we look forward to litigating the remaining issues."

"As Governor, I am honored to lead a state that is committed to standing up for those without a voice and will continue to fight for the unborn," he added.

The law would ban abortion outright should the Supreme Court overturn Roe. It also includes bans on abortion at 14, 18 and 20 weeks, which could go into effect if a court finds the eight-week ban invalid.