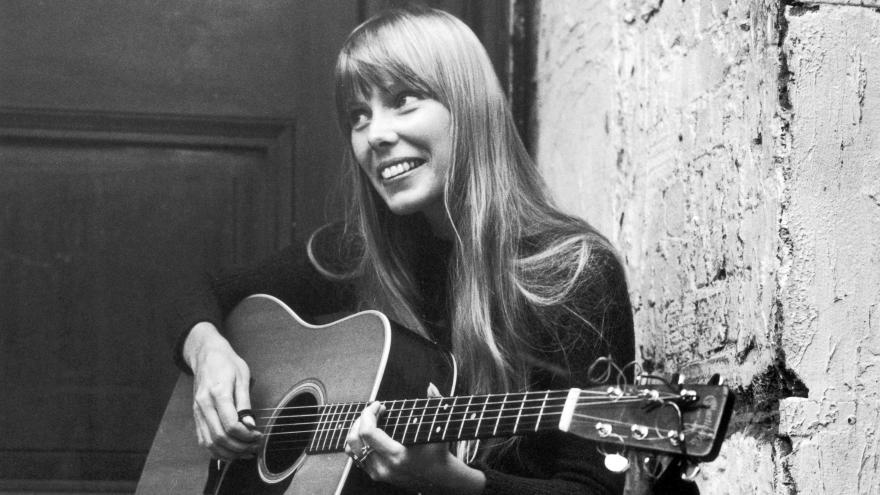 (CNN) -- Singer-songwriter Joni Mitchell said she will remove her music from Spotify, following controversy over vaccine misinformation hosted on the streaming platform.

"Irresponsible people are spreading lies that are costing people their lives," the Canadian musician wrote in a statement posted on her website Friday. "I stand in solidarity with Neil Young and the global scientific and medical communities on this issue."

Mitchell's move comes after Young requested his managers and record label order the immediate removal of all his songs from Spotify, due to vaccine misinformation propagated by comedian and podcaster Joe Rogan.

In a now-deleted statement on his website, Rolling Stone reported that 76-year-old Young said the consequences were "potentially causing death to those who believe this disinformation spread," adding, "They can have Rogan or Young. Not both."

Mitchell, known for her songs "Big Yellow Taxi" and "A Case of You," also cited an open letter to Spotify published earlier this month by a coalition of scientists and medical professionals requesting the implementation of an anti-misinformation policy.

The letter was republished in full on the 78-year-old singer's website, and in it the writers outlined a number of concerns about Rogan's podcast "The Joe Rogan Experience," which is currently the most popular podcast in the US and UK on Spotify.

CNN has contacted Spotify and Mitchell's record company Rhino for comment, but has yet to receive responses.

Rogan has "discouraged vaccination in young people and children, incorrectly claimed that mRNA vaccines are "gene therapy," promoted off-label use of ivermectin to treat COVID-19... and spread a number of unsubstantiated conspiracy theories," the authors of the open letter said.

They also said at least two recent guests had "compared pandemic policies to the Holocaust" and said misinformation was "a sociological issue of devastating proportions and Spotify is responsible for allowing this activity to thrive on its platform."

Spotify later agreed to remove Young's music from their platform, and the hashtag #DeleteSpotify went viral amid criticism of Rogan's podcast. Apple Music also tweeted Thursday that it was now "the home of Neil Young."

Young and Mitchell together have almost 10 million monthly listeners on Spotify, with Young having over 6 million, while Mitchell has 3.7 million listeners.