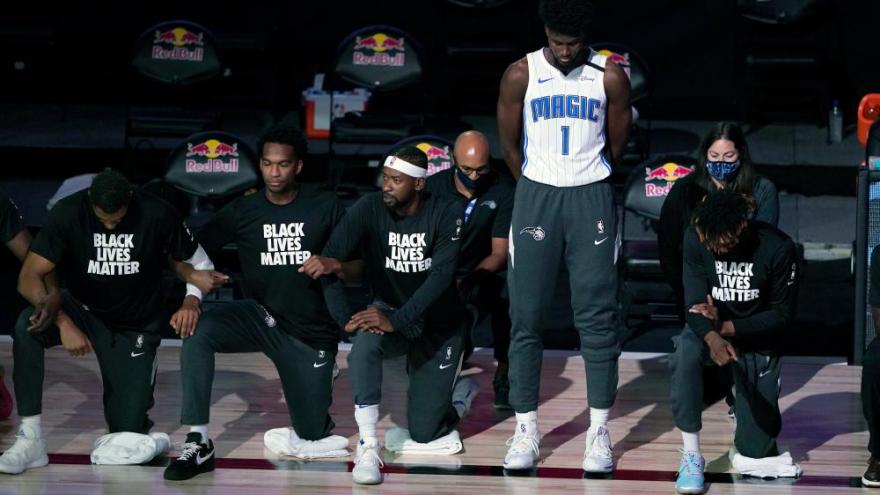 Orlando Magic's Jonathan Isaac stands as others kneel before the start of an NBA basketball game between the Brooklyn Nets and the Orlando Magic Friday, July 31, 2020, in Lake Buena Vista, FL.

(CNN) -- Orlando Magic forward Jonathan Isaac became the first NBA player to stand for the National Anthem as the league resumed play after a 20-week hiatus due to the coronavirus pandemic.

The television broadcast showed Isaac, who is Black, standing as players and coaches from both teams, as well as referees, took a knee during the playing of the National Anthem. The 22-year-old forward was also the only player seen not wearing a "Black Lives Matter" shirt.

Isaac can be seen wearing his Magic game jersey instead.

He explained his position on Friday ahead of the game versus the Brooklyn Nets, saying that he doesn't think "putting that shirt on and kneeling went hand-in-hand with supporting Black lives."

"For me Black lives are supported through the gospel. All lives are supported through the gospel," he said. "We all have things that we do wrong and sometimes it gets to a place that we're pointing fingers at who's wrong is worst. Or who's wrong is seen, so I feel like the Bible tells us that we all fall short of God's glory. That will help bring us closer together and get past skin color. And get past anything that's on the surface and doesn't really get into the hearts or men and women."

Social media observers questioned why he chose to abstain from the league-wide protest.

"I'm very curious about — and will be patient for — Jonathan Isaac's explanation here," tweeted basketball writer Dane Moore. "Standing for the anthem is one thing... But seeming to be intentional about *not* wearing a Black Lives Matter shirt.... I dunno, man..."

"Drag me I don't care.." said another Twitter user. "What Jonathan Isaac did was his right to do. I lost no respect for him and still respect him for who he is. If a player stands or kneels, I could care less."

The owners of the Magic, the DeVos family, released a statement in support of the players pre-game protest on Friday. The statement did not allude to Isaac's decision to stand.

"The DeVos Family and the Orlando Magic organization fully supports Magic players who have chosen to leverage their professional platform to send a peaceful and powerful message condemning bigotry, racial injustice and the unwarranted use of violence by police, especially against people of color," the statement said.

It added, "We are proud of the positive impact our players have made and join with them in the belief that sports can bring people together -- bridging divides and promoting inclusion, equality, diversity and unity. We know this is not about the military, the men and women who serve honorably to keep our communities safe for all, or those who have paid the ultimate price to provide freedom, including freedom of expression."

"We're confident the entire Magic family has immense respect for these entities and individuals," the statement said. "This is about coming together to end racism once and for all. We are committed to walking alongside our players -- today and in the many days ahead -- in the pursuit of lasting and impactful change."

The Magic are taking on the Brooklyn Nets in the league's third game of the resumed season in Orlando.

Every player kneeled for the NBA's reopening games

Moments before tipoff on Thursday evening, players with the New Orleans Pelicans and the Utah Jazz, joined by coaches and game officials, all took a knee. The Los Angeles Lakers and Los Angeles Clippers followed suit ahead of their game in Orlando.

On some game jerseys, players' names were replaced with messages, such as "Equality," "I am a man," "Ally," and "Say her name," sending a clear message in support of the social justice movement.

NBA Commissioner Adam Silver said Thursday night he would not force players to stand during the anthem.

"I respect our teams' unified act of peaceful protest for social justice and under these unique circumstances will not enforce our long-standing rule requiring standing during the playing of our national anthem," Silver said.