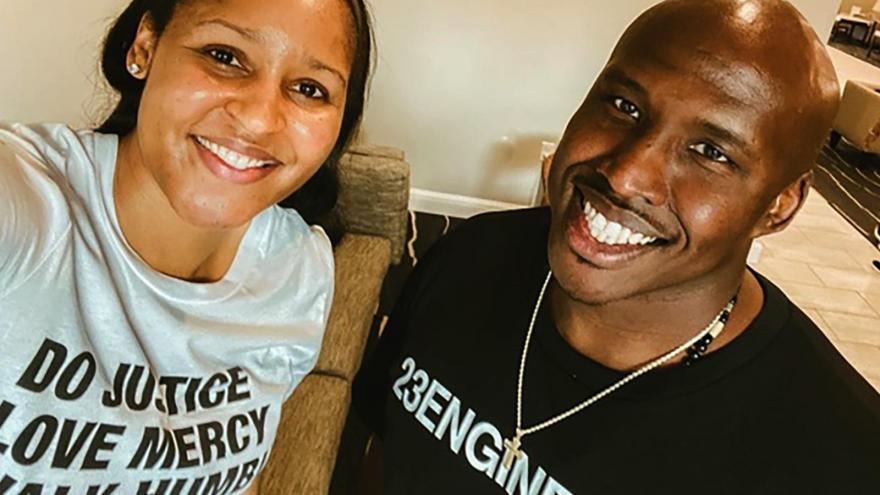 (CNN) -- Four-time WNBA champion Maya Moore sat out for an entire season to help overturn the conviction of Jonathan Irons, who she said was wrongfully serving a 50-year- prison sentence.

On Wednesday, Irons walked out a free man -- and Moore was one of the first to embrace him.

"Thank God it's over," Moore said in a video of Irons' release she posted on her Instagram, captioned with the word "FREEDOM."

The two met in 1998, when Moore was just 16 years old, in a prison ministry. Irons had been convicted for burglary and assaulting a homeowner with a gun -- a conviction that was overturned by a judge in March.

"I feel like I can live life now," Irons said Wednesday. "I'm free, I'm blessed, I just want to live my life worthy of God's help and influence. ... I thank everybody who supported me — Maya and her family."

A star in her prime

Moore, a basketball superstar in her prime, announced in January she would skip a second season to focus on criminal justice reform.

"When we take time to stand up for people, and to shine a light in a dark place, not everybody is going to like it," she had said. "When it costs your comfort or maybe something that you just want to kind of check out and enjoy, I get that.

"Entertainment is a place where you want to relax and not have to think about the cares of the world, but we are in the world and the world is broken. So hats off to people that sacrifice, that pay a cost of a platform, of a job, of money to stand up for something greater than yourselves and at the end of the day, if we remember we're human beings first, I think it'll make it a little less controversial."

She's considered one of the greatest women's basketball players -- and winners -- of all time. Her resume is full of superlatives. Selected by the Minnesota Lynx as the No. 1 overall pick in the 2011 WNBA draft, Moore went on to win the league's rookie of the year award and her first WNBA title in her first season. She added titles in 2013, 2015 and 2017, winning WNBA Finals MVP honors in 2013 and the WNBA MVP award in 2014.

As a member of Team USA, Moore won Olympic gold in 2012 and 2016 as well as two world championships in 2010 and 2014. When she played in college at the University of Connecticut, the Huskies went undefeated in back-to-back seasons, winning national titles in 2009 and 2010.