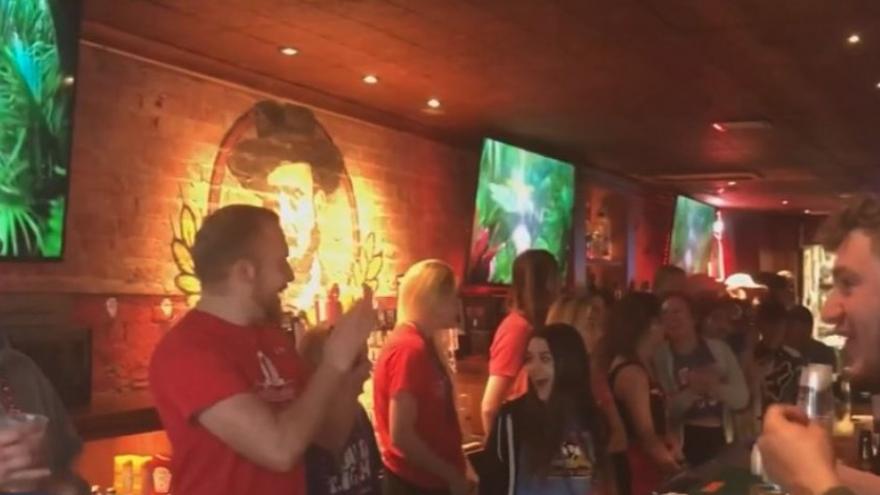 LAWRENCE, Kansas (KCTV, KSMO) -- Before it was clear that the KU men’s basketball team was going to move on to the Elite Eight, there was plenty of reason to cheer at Johnny’s North Lawrence location, when the staff was lined up behind the bar and offered a $50,000 tip to split among them.

March Madness means a madhouse at Lawrence staples like Johnny’s. It takes 2/3 of their staff, 40 people in the small spot, to stay on top of the action.

“But it’s fun. Everyone is like so excited for KU here. It’s like everybody cheers together and stuff. It’s like a big party,” said server Zoe Madeline McLoughlin.

She and cook Jalen Galloway didn’t have much to say about the tough part, save for a few grease burns, the best part was the same for both.

“Best part of being a cook is honestly getting compliments from customers. You’ll be walking by and they’ll be like, ‘That was a great pizza.’ [And I’ll say] ‘Ah, appreciate it, appreciate it,’” said Galloway

“Like, I have a lot of people who come in and are like, ‘Can I sit in Zoe’s section?’ And it makes you feel good,” said McLoughlin.

They had no idea what was to come from Lexy Burke, a Nashville TikToker known as “The Serial Tipper.”

In 2020, she started asking followers to put spare change in a Venmo so she could hand out some sizable surprise tips. We’re talking $250 to a $1,000 and sometimes more.

“It’s just been crazy. All the people who want to contribute just to see a smile on somebody’s face on social media,” she remarked.

Friday night, right before halftime, Johnny’s owner told all the staff to round up behind the bar for an announcement. Burke informed them they were going to be splitting a tip of $50,000. That includes both front and back of the house staff, the cooks and dishwashers, who don’t usually get tipped.

“The money is awesome. But another thing I think it just goes to show that as much as this world can be screwed up, there’s still a lot of good people in this world,” said a manager working behind the bar.

This time the tip wasn’t crowd funded. Ally Bank financed the affair for something they’ve dubbed the Ally Tip Off and hired Burke to make the announcement. Although there were about 40 people working Friday, Johnny’s owner Rick Renfro said he’d be splitting it between his full staff of about 60 people, including those who were not on the schedule for the Sweet Sixteen game night. Divided up, that amounts to more than $800 each.

Those serving up a good time for Jayhawks fans weren’t the only ones who got a little love. They also covered the first-half bar tab (up to $15,000) for customers and did the same for staff and fans at Arizona Wildcats, Arkansas Razorbacks and Providence Friars bars.