Johnny Depp associates testify about challenges working with him 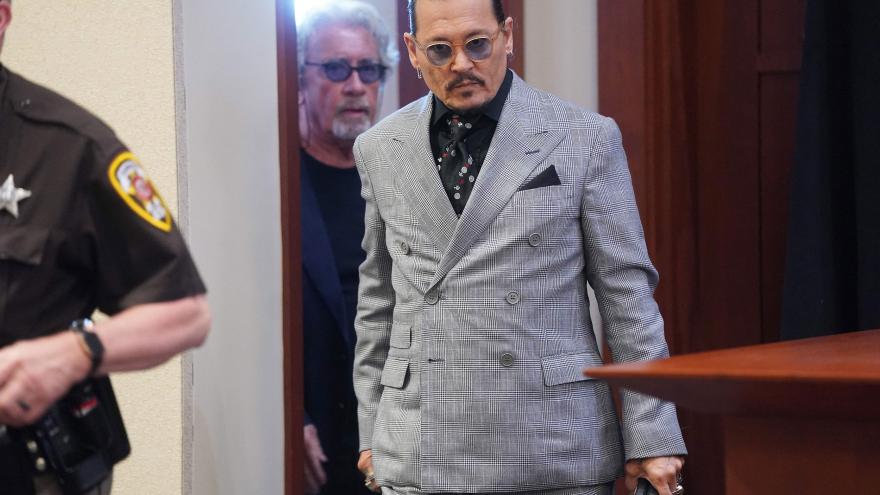 (CNN) -- Jurors in the ongoing defamation case between actress Amber Heard and her ex-husband Johnny Depp heard testimony Thursday from Depp's former talent agent, a former good friend and his former business manager, who described strain on their relationships with the actor as his alleged substance abuse increased.

Depp has sued Heard for $50 million, alleging that a 2018 op-ed she wrote in the Washington Post defamed him. Depp claims the piece -- which did not mention him by name -- falsely painted him as an abuser. Heard has countersued Depp for $100 million, saying statements his attorney made calling her abuse claims a "hoax" were defamatory.

Tracey Jacobs, who testified in a recorded deposition, said that she represented Depp for 30 years as his talent agent and said at one point that he was "the biggest star in the world." Jacobs said Depp terminated her around the same time he parted ways with other business associates in his life.

Jacobs testified that she was honest with Depp that showing up late consistently to sets and his behavior, including drug and alcohol use, was hurting his career. She testified that Depp regularly had to use an earpiece while on set in order to be fed his lines.

"His star had dimmed due to it getting harder to get him jobs given the reputation that he'd acquired due to his lateness and other things," Jacobs testified. "People were talking and the question was out there about his behavior."

As part of his suit, Depp has claimed that Heard's op-ed caused him to lose out on work, including tens of millions of dollars he said he was to be paid for the sixth "Pirates of the Caribbean" film, that he will likely not be a part of. Jacobs also testified that she could not recall that Disney committed to having Depp in the film.

Jacobs testified that, at one point, Depp was in a state of "financial desperation" and asked the agency to give him $20 million.

Long-time Disney executive Tina Newman, whose deposition was recorded in February and played for jurors on Thursday, said that she did not recall seeing Heard's op-ed and that she does not know if Depp is being considered for a role in the sixth "Pirates" film.

"That's above my head," Newman testified. "I just know it's a project that's possibly in development at the studio."

Jurors also heard a recorded deposition from Depp's former business manager Joel Mandel, who Depp parted ways with in 2016 and whose company Depp sued in 2017, accusing it of mismanaging his earnings. The lawsuit was settled in 2018.

Mandel testified that around 2010 it became harder to work with Depp due to a seemingly daily use of substances.

"What I had always experienced as someone who liked to enjoy his wine at the end of the day became consumption that seemed excessive," Mandel testified. "The ability to coordinate and find times when he would meet became more difficult. It became clear over time that there were issues with alcohol and drugs. And that translated into more erratic behavior, more stressful behavior, more times when it was difficult to engage in the kinds of conversation I needed to do my job."

Mandel said he began very regularly expressing his concerns over Depp's "very dire financial circumstances" in 2015 and said that while Depp's income was very significant, so was his spending. He said at one point Depp paid $300,000 a month to staff.

Heard's legal team has pointed to the fact that several of Depp's paid staff testified as part of his case against her and has accused them of siding with Depp because he pays them.

One former friend of Depp, Bruce Witkin, testified in a recorded deposition that Depp stopped speaking with him four years ago after testimony Witkin gave in a lawsuit. He testified that he'd seen both Heard and Depp with injuries but has never witnessed physical altercations between them. Witkin said he talked to Depp about his substance abuse and said that the people who worked around him weren't always willing to speak up about it.

"Like I said, people on payroll won't really say much. They'll try, but they don't want to lose their job. I'm not saying they all fall into that category, but it's a strange thing around people like him. Everybody wants something," Witkin said.

Actress Ellen Barkin, who said she's known Depp since 1990, testified that she was in a relationship with Depp that became sexual for several months in 1994.

Barkin testified Depp was drunk "most or a lot of the time" that she was with him and described him as controlling and jealous. She described an incident at a Las Vegas hotel room when there was a fight going on between others.

"Mr. Depp threw a wine bottle across the room, the hotel room, in one instance in Las Vegas, while we were shooting 'Fear and Loathing in Las Vegas,'" Barkin recalled.

Court proceedings will resume Monday for the final week of testimony.