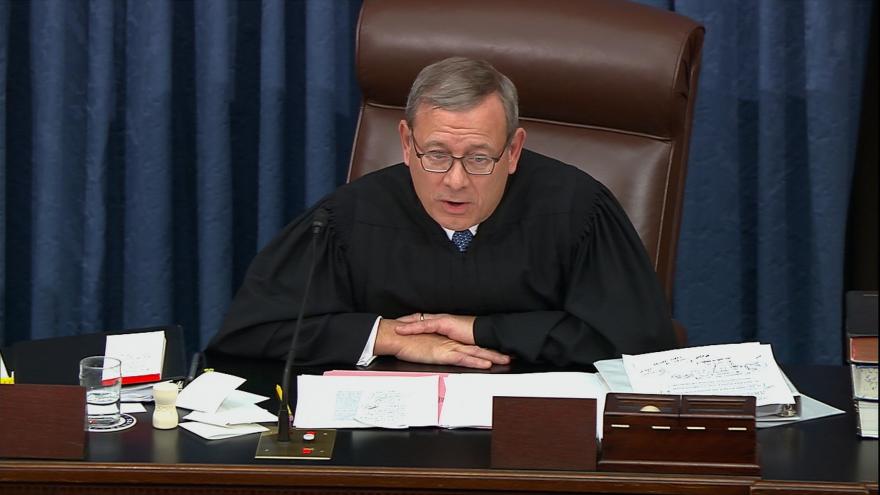 Chief Justice John Roberts, the Supreme Court's pivotal vote, asked just three questions during an incendiary Louisiana abortion rights case on Wednesday, guarding his actual views of whether the tough regulation was constitutional. But Roberts has clearly laid the groundwork for an important Supreme Court decision that would reverse precedent and uphold new restrictions on physicians who perform abortions.

(CNN) -- Chief Justice John Roberts, the Supreme Court's pivotal vote, asked just three questions during an incendiary Louisiana abortion rights case on Wednesday, guarding his actual views of whether the tough regulation was constitutional. But Roberts has clearly laid the groundwork for an important Supreme Court decision that would reverse precedent and uphold new restrictions on physicians who perform abortions.

Before he engaged in a highly public war of words with top Senate Democrat Chuck Schumer on Wednesday, Roberts was more crucially indicating receptivity to state restrictions on abortion.

The Court, over Roberts' dissent in 2016, struck down a Texas law similar to Louisiana's, saying it was medically unnecessary and burdened a woman's right to end a pregnancy. At the time, Roberts was actively critical of the physicians challenging the law that required them to obtain certain hospital credentials and that had led to the closure of abortion clinics in Texas.

Justice Anthony Kennedy, who voted to strike down the Texas law, has since been replaced by Justice Brett Kavanaugh. The cemented 5-4 conservative majority, reinforced by Roberts' overall record of never voting to strike down any abortion restriction, could lead to a significant retrenchment on abortion rights in America.

Because of the limited nature of the Louisiana case, a ruling would not constitute an outright reversal of the 1973 milestone Roe v. Wade, which made abortion legal nationwide. Rather, it would mark a step in that direction, limiting access to abortion. And in this election year, such a ruling would accelerate controversy over presidential appointments and the future of America's highest court.

Yet signals from Roberts are not the end of the matter for judging the chief justice today.

Roberts' influence on the nine-member bench has been transformed since he last staked out a position on abortion rights. Roberts became the justice at the ideological center after Kennedy's retirement.

The 65-year-old chief justice has inched slightly to the left on some issues since then and demonstrated a stronger desire to shield the Court from accusations of politicking. He is testing public assumptions about a bench deeply split between five Republican-appointed justices and four justices appointed by Democrats.

tHis interest in asserting the justices' independence was on display in a statement from Roberts that the Court's Public Information Office issued late Wednesday, in which he called remarks Schumer made at a rally earlier in the day "threatening" and "dangerous."

Schumer, a New York Democrat, referred to Trump appointees Neil Gorsuch and Brett Kavanaugh and said he wanted them to know: "You have released the whirlwind, and you will pay the price. You won't know what hit you if you go forward with these awful decisions."

Roberts responded: "Justices know that criticism comes with the territory, but threatening statements of this sort from the highest levels of government are not only inappropriate, they are dangerous. All Members of the Court will continue to do their job, without fear or favor, from whatever quarter."

Yet Roberts raised a line of inquiry that would differentiate the Louisiana law, requiring physicians to obtain "admitting privileges" from a hospital within 30 miles of clinics, from the similar Texas regulation.

In 2016, the majority found that the admitting-privileges requirement reduced the number of physicians available to perform abortions while offering virtually no health benefits for women.

Addressing Julie Rikelman, lawyer for physicians who have sued Louisiana, Roberts said, "Counsel, do you agree that the inquiry under Hellerstedt is a factual one that has to proceed state-by-state? ... You have to have the district court (judge) examine the availability of specific clinics and the admitting privileges of doctors, so that the ... results could be different in different states?"

Rikelman said the Texas decision should control the current case, and the consequences should not be different for Louisiana.

"This court held in Whole Woman's Health that the Texas admitting privileges law was medically unnecessary and its burdens were undue," Rikelman said. "That holding should clearly apply to Louisiana's identical law, and certainly the Court's reasoning is applicable in Louisiana. Now, the burdens of a law may vary, but a law that has no benefits and doesn't serve any valid state interest is much more likely to impose an undue burden."

Roberts later asked Louisiana Solicitor General Elizabeth Murrill about state comparisons but focused on the benefits of regulation, rather than any burden.

"I think that a state could certainly show greater benefits," Murrill said, "depending on what their regulatory structure is and what the facts are on the ground in that state." Louisiana officials said in their written brief that the 2014 law was intended to protect women from "unscrupulous and incompetent abortion providers."

The Trump administration is siding with Louisiana, and Roberts asked Deputy Solicitor General Jeffrey Wall whether the advantages of regulation could vary from state to state. Wall said they could vary, but that there's likely to be more of a variance on whether a particular law poses a burden in a state.

Louisiana is arguing that its physician regulation would not have the severe impact on clinic operations that occurred in Texas. The challengers disagree and stress that a trial court judge found abortion in Louisiana to be safe and declared the new regulation would not enhance women's health or safety.

Four years ago, in the Texas case, Roberts suggested by his questions that he believed the essential question for courts was whether women's right to end a pregnancy was truly burdened, irrespective of the state's asserted benefit.

It would have been difficult back then to foresee how much would change at the Supreme Court in four years and the evolution of Roberts' power, particularly in an abortion case.

Justice Antonin Scalia had died only a few weeks earlier, on Feb. 13, 2016, and it looked as if then-President Barack Obama would be naming his successor and flipping the ideological majority of the bench. For the first time in more than a half century, the chief justice would be in the minority ideologically.

Instead, of course, Obama's choice of Judge Merrick Garland for the Scalia seat was blocked by Senate Republicans for nearly a year, and Roberts retained his majority.

After President Donald Trump won the White House, he named consistent conservative Judge Gorsuch to the Scalia seat in 2017. That nomination did not change the ideological lineup of the bench or, likely, alter the abortion equation.

But when Trump named Judge Kavanaugh as the successor to centrist Kennedy in 2018, the balance shifted to the right, and the influence of Roberts at the center expanded.

How that mantle of the weighty middle vote shapes Roberts' position on abortion will not be known for months. On Friday, according to their usual practice, the justices will take a preliminary tally in a private session on the case of June Medical Services v. Russo.

Their final decision would be issued by the end of June, when the justices recess for the summer.