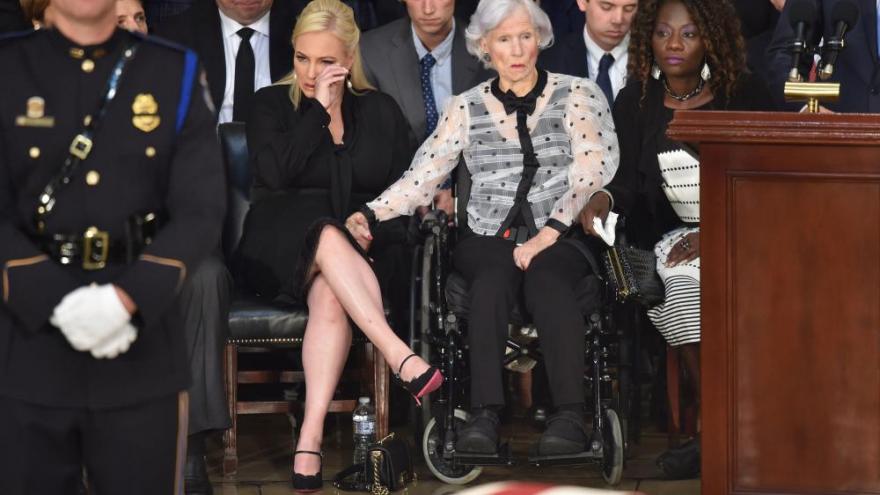 Roberta McCain, mother of the late US Senator John McCain, and granddaughter Meghan McCain attend the ceremony honoring Senator McCain at the US Capitol Rotunda on August 31, 2018 in Washington, DC.

(CNN) -- The late Sen. John McCain's mother died on Monday at age 108, according to his widow, Cindy McCain.

"It is with great sadness that I announce the death of my wonderful Mother In-law, Roberta McCain," Cindy McCain tweeted. "I couldn't have asked for a better role model or a better friend. She joins her husband Jack, her son John and daughter Sandy."

Roberta McCain attended her son's funeral services in Washington after the Arizona Republican died at 81 from brain cancer in 2018.

The McCain matriarch was a frequent presence on the campaign trail when her son sought the presidency in 2008. A spirited woman, Roberta McCain regularly traveled, including a trip to Europe in her 90s.

"Do you want me to sit around and play bridge every day? Or discuss my last knee replacement? Or pass around pictures of my grandchildren?" she told CBS News in a 2008 interview alongside her son, John. "Well, that isn't my choice of a way to live."

Though she mostly stayed away from her son's 2000 presidential bid, McCain was still known as a prolific traveler -- and a firm mother.

She told Time in 2000 that when she read a portion of her son's book on his time as a prisoner of war that described his captors with a slew of expletives, she told him, "Johnny, I'm going to come over there and wash your mouth out with soap."

"But Ma Ma, these were bad people," he told her, by her account, but she stood firm.

"He better never speak like that again, or I'll smack him bald-headed," she told the magazine at the time. "Of course, he almost already is."

John McCain told CBS News in 2008 that he and his mother become very close in his early years. And during his speech accepting the Republican presidential nomination that year, he credited his mother for raising him while his father, John McCain Jr., a Navy Admiral, was away.

"My friends, when I was growing up, my father was often at sea, and the job of raising my brother, sister and me would fall to my mother alone," McCain said at the time. "Roberta McCain gave us her love of life, her deep interest in the world, her strength and her belief that we're all meant to use our opportunities to make ourselves useful to our country."

He added, "I wouldn't be here tonight but for the strength of her character."

In his final book, "The Restless Wave," McCain wrote that his mother's "main attributes are enthusiasm, wanderlust, and good genes."

"Her vivaciousness is a force of nature," he wrote. "Even now, after a stroke has slowed her down, when her brisk pace is a memory and speaking can be a chore ... there's still a spark in her, a brightness in her eyes that would light up the world if she could resume her peripatetic life."

He continued, "I am my mother's son. I always have been."

The late senator was far from Roberta McCain's only cheerleader in the family.

In a tweet wishing her grandmother a happy 107th birthday last year, Meghan McCain, a co-host of ABC's "The View," called her "the epitome of strength and grace, an American treasure and one of my life role models."

She credited her grandmother as the person who had showed her "and so many others how to truly live life on your own terms."