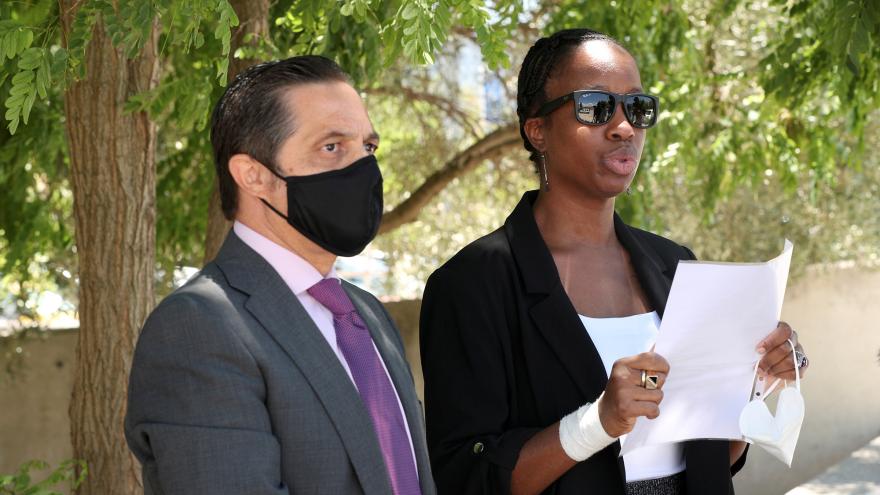 (CNN) -- The widow of controversial antivirus software magnate John McAfee said her husband was not suicidal, and blamed United States authorities for "this tragedy" after he was found dead in his cell in a prison near Barcelona on Wednesday.

The 75-year-old McAfee, who had multiple run-ins with the law, was awaiting extradition after being charged with tax evasion in the United States last year.

Speaking to reporters outside the prison on Friday, Janice McAfee demanded a thorough investigation, saying she wanted "answers of how this was able to happen."

The cause of McAfee's death is under investigation, a spokeswoman for the Superior Court of Catalonia told CNN this week.

Janice McAfee's lawyer, Javier Villalba, told reporters Friday his client is waiting for the official autopsy to be done adding that the family has requested a second and independent one.

"I blame the US authorities for this tragedy. Because of these politically motivated charges against him. My husband is now dead," Janice said during a statement.

"His last words to me were: I love you and I will call you in the evening" Janice said. "He would have never quit this way, he would never take his life in this way, ever."

His death came after a ruling from a three-judge panel at Spain's National Court in Madrid this week that McAfee could be extradited to the United States to face charges there. That decision could still have been appealed to a larger panel of judges at the same court, according to court documents.

Janice said Friday the Spanish court's decision to extradite him did not come as a surprise and they had a plan in place to appeal it.

McAfee had a cell mate at the prison, but that person was not in the cell around the time that McAfee was found dead, a prison official, who asked not to be named, told CNN. The official added the other person was out doing other normal activities at the prison. Asked if authorities had imposed special monitoring measures on McAfee in his cell, the official said, "I'm not aware of that."

McAfee was arrested in Spain in October after being indicted in the United States for tax evasion months earlier. He allegedly failed to file taxes for four years despite earning millions in income between 2014 and 2018 from promoting cryptocurrencies, consulting work, speaking engagements, and selling the rights to his life story for a documentary, according to court documents. The amount he owed was not specified in the indictment.

McAfee — founder of the eponymous antivirus software firm, with which he is no longer affiliated — was also indicted in March on separate fraud and money laundering charges. The US Department of Justice alleged that he and a business partner participated in a scheme that earned more than $13 million by falsely promoting cryptocurrencies to unwitting investors.