John Legend and Kelly Clarkson rewrite 'Baby It's Cold Outside' 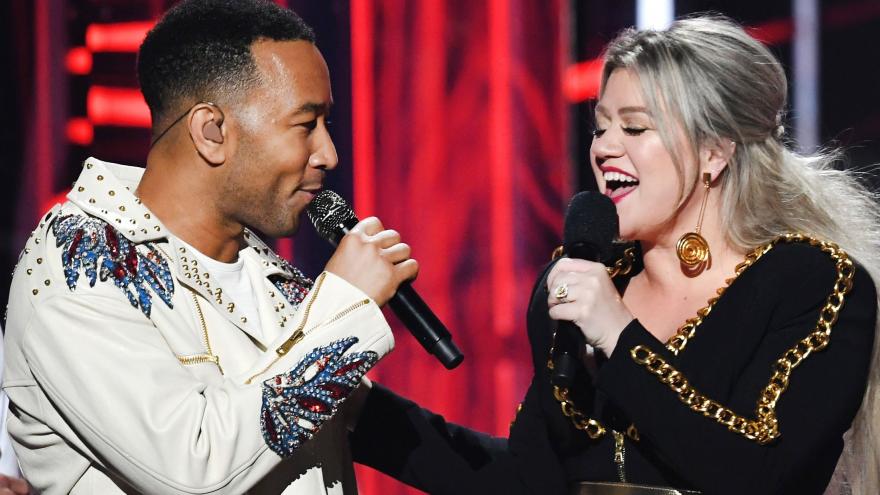 WISCONSIN (CNN) -- John Legend and Kelly Clarkson have put a 21st-century spin on the classic holiday song "Baby, It's Cold Outside," which has been the subject of criticism for what some listeners see as sexist or non-consensual lyrics.

In the original lyrics, written by Frank Loesser in 1944 and made famous by the film "Neptune's Daughter" in 1949, the male singer seems to be insistently persuading his female guest to stay, despite her insistence that, "I've got to go away," and, "The answer is no."

In the era of #MeToo, those lines seem to many like definite denials of the male singer's pleas of, "What's the sense in hurtin' my pride?" and, "Oh baby don't hold out."

Listeners in the 1950s may not have blinked an eye, but in a culture than now focuses more on sexual consent, the lyrics seem problematic to some.

Instead of canceling the song altogether, Legend and Clarkson present a fresh set of lyrics to the iconic jazzy tune. This time, the song sounds more like the parting of two lovers rather than a strange persuasion effort.

When Clarkson sings, "I've got to go away," Legend returns with, "I can call you a ride." And guess what? Her driver's name is Murray and Legend wants her to text him when she's home safely.

"Text me when you get home," Legend sings.

But don't worry, he's not shoving her out the door. It's obvious the two want to be together, but Clarkson just isn't feeling completely sure about staying the night and doesn't want to worry her family.

Legend brings up a good point, though, when he sings, "Wait, what are you still livin' home for?"

That's right! And you know what else?

"It's your body and your choice," he tells her as she worries what her friends will think, echoing the cry of women's rights protesters on the decade.

Not everyone's warming up to the idea of a new version.

"The Talk" co-host Sharon Osborne is chilly towards the new release. "It's a piece of art... to change an innocent lyric, to what is it, 'your mind and your body?' What the hell are you on? That's ridiculous," she said during a discussion on the show.

"I think what he's done is he's stealing the thunder from Frank Loesser's song and my dad," she said on Good Morning Britain. "He should write his own song if he doesn't like this one, but don't change the lyrics. It's a classic, perfect song."

See for yourself, though. Here's the song and lyrics so you can decide how you feel about it.

I really can't stay (Baby, it's cold outside)

So very nice (Time spent with you is paradise)

My daddy will be pacing the floor (Wait, what are you still livin' home for?)

So, really, I'd better scurry (Your driver, his name is Murray)

But maybe just a half a drink more (Oh, we're both adults, so who's keepin' score)

What will my friends think? (Well, I think they should rejoice)

If I have one more drink? (It's your body and your choice)

Ooh you really know how (Your eyes are like starlight now)

At least I'm gonna say that I tried (Well, Murray, he just pulled up outside)

Baby, it's cold outside

I simply should go (Text me when you get home)

This welcome has been (I've been lucky that you dropped in)

So nice and warm (But you better go before it storms)

My sister will be suspicious (Well, gosh your lips look delicious)

My brother will be there at the door (Oh, he loves my music, baby, I'm sure)

My gossipy neighbor's vicious (I'm a genie, tell me what your wish is)

But maybe just a cigarette more (Oh, that's somethin' we should probably explore)

You've really been grand (I feel when you touch my hands)

There's bound to be talk tomorrow (Well, they can talk, but what do they know)

At least there will be plenty implied (Oh, let their mind their business and go)