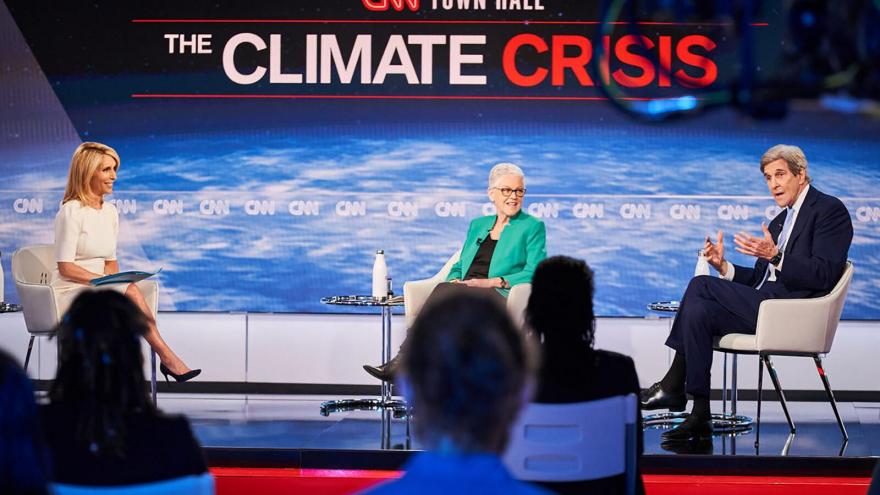 "We have to kind of achieve the baseline of facts and science on which we normally as Americans have made decisions," Kerry told CNN's Dana Bash when asked about his message to Republicans doubtful about the threat of climate change.

"And when we decide to do things, what's exciting is, this is good for all Americans," he continued. "This is going to be the greatest market, the greatest job creator since the Industrial Revolution, and I think Republicans will see that."

Climate is a big focus of President Joe Biden's roughly $2 trillion infrastructure proposal, which he has said would create hundreds of thousands of jobs while tackling the climate crisis, reducing emissions and building a "modern, resilient and fully clean grid." Biden kicked off a two-day virtual White House climate summit on Thursday attended by 40 other world leaders by announcing an ambitious reduction in greenhouse gas emissions as he looks to put the US back at the center of the global effort to address the climate crisis and curb carbon emissions.

Kerry also expressed confidence during the town hall that the Biden administration's ambitious climate efforts will withstand potential attacks from future administrations opposed to combating climate change. Environmentally-conscious investment has been a theme of the administration's climate platform, with Kerry cheering the formation of the Net-Zero Banking Alliance, a group of 43 banks representing 23 countries and $28.5 trillion in assets that have pledged to align with net-zero emissions by 2050, according to the United Nations.

"I'll tell you why this will stick -- because trillions of dollars are going to be spent and invested all around the world," he said during the town hall, adding that "that money that is being invested, no politician could come along and undo what is going to happen in the transformation of our economies on a global basis."

When pressed on Biden's executive orders on climate change -- which include rejoining the Paris Climate Accord earlier this year -- potentially being at risk of reversal in the future, Kerry said he didn't believe that would happen because "it's going to be too big an economic force and future that is taking place."

Bash asked Regan whether he agreed with calls to require that oil companies' advertising on television and social media include "tobacco-style health warnings" about the dangers fossil fuels pose to the future of the planet.

"I think education on every level is important, I think the public deserves a right to know who is contributing to pollution in this society," Regan said. "At EPA, you know, that's out of our lane, but I think in terms of a good general practice, the public needs to understand and at EPA, this is why we're putting our websites back up, we're publishing our science."

He continued, "We want people to know that in addition to what the government can do to regulate and control these emissions, that we can empower them with information so that they can make decisions for themselves as well."