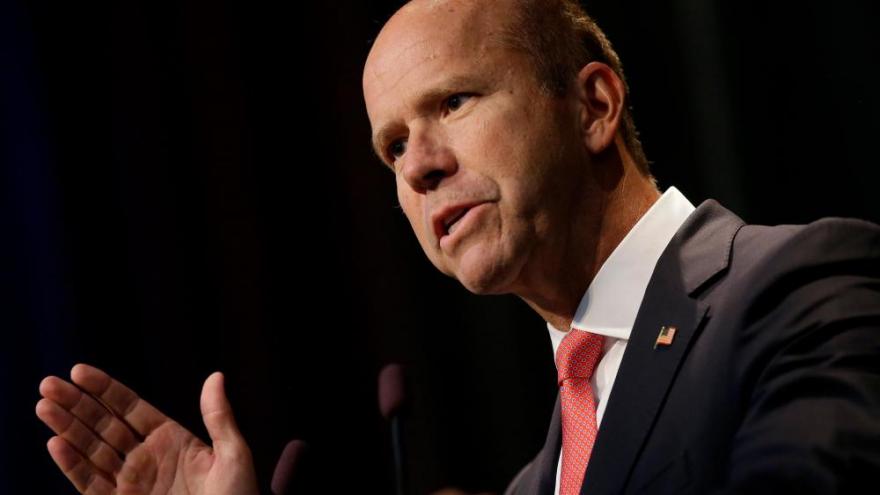 Former Rep. John Delaney announced that he's dropping out of the 2020 Democratic presidential race, ending a long-shot bid that saw the Maryland Democrat spend millions of his own fortune only to fail to gain any traction in the 2020 race. Pictured here, Delaney speaks at the Iowa Federation Labor Convention on August 21, 2019 in Altoona, Iowa.

(CNN) -- Former Rep. John Delaney announced Friday that he's dropping out of the 2020 Democratic presidential race, ending a long-shot bid that saw the Maryland Democrat spend millions of his own fortune only to fail to gain any traction in the 2020 race.

Delaney, who announced his campaign in summer 2017, had planned to stake his campaign on success in Iowa's first-in-the-nation nominating contest. But the Democrat ultimately opted to drop out three days before the caucuses.

"It's clear to me on Monday, on caucus night, I will not have sufficient support to get to the 15% viability threshold ... that is needed to get delegates out of Iowa," Delaney told CNN's John Berman on "New Day."

Delaney did not endorse another Democrat for president but vowed to support the party's eventual nominee, whoever it is. He said his decision was motivated in part to make sure moderate candidates have a better shot at succeeding in Iowa.

"My support is sufficient enough to take from other more moderate candidates, and I just don't want to do that," he said.

But Delaney cautioned against nominating either Sens. Bernie Sanders or Elizabeth Warren, whom he believes are too liberal and would have "a tougher campaign against Donald Trump" in a general election.

"Their proposal takes health care away from a lot of people and forces them on some new government plan. That's a hard way to win an election," Delaney said.

The end of Delaney's campaign has been in view for months, ever since the candidate failed to garner support in any polls and slowed the ad spending that had defined his early campaigning.

Delaney, after qualifying for the first two Democratic debates in June and July, failed to garner enough support to qualify for any subsequent contests.

His presidential strategy was unlike nearly all of his competitors. Delaney, a self-made millionaire who took two companies public, announced his presidential bid in July 2017, over a year before the majority of the field entered the race.

But Delaney's bid, even when he was one of the only candidates in the race, failed to gain any traction. As the race filled out around him, Delaney was squeezed even more, largely pushing on with little fanfare.

Delaney, a moderate lawmaker who previously represented Maryland's wealthy Washington, DC, suburbs, staked his strategy on speaking truth to progressive power. Delaney said Sanders was "not a Democrat," he railed against the party "embracing socialism," and he slammed the Green New Deal, a sweeping climate change plan that is popular with the party's left.

What Delaney lacked in fundraising -- over 90% of the money he brought in during the second quarter of 2019 came from his own bank account -- he attempted to make up for in travel. He logged dozens of trips to Iowa and New Hampshire during his lengthy run and, before most candidates were even in the race, he visited all 99 of Iowa's counties.

"I think the American people are yearning for someone who's a truth-teller," Delaney told CNN last year. "Sometimes the best way to make that point is to be a little bit disagreement with your own party, right?"

But, by fall 2019, even his closest advisers knew things were coming to an end.