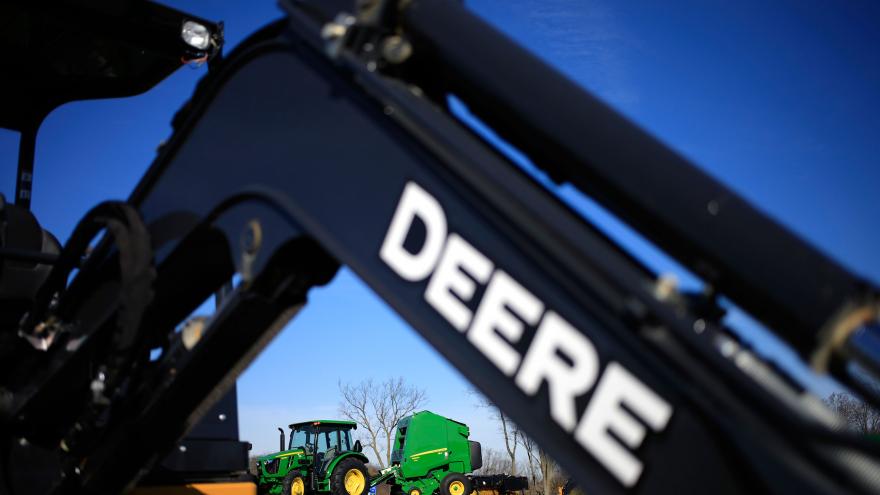 The UAW had reached a tentative agreement on a new six-year contact with the company two weeks ago, only to see 90% of the rank-and-file members of the union reject it in a ratification vote that concluded this past Sunday. Union and management negotiators talked into the night Wednesday trying to reach a new deal but were unable to do so.

This is the nation's largest private-sector strike since the UAW waged a costly six-week strike against General Motors two years ago. And it continues a recent trend of workers flexing more muscle as the dynamics of the labor market tip more toward them and away from employers. Businesses have been struggling to find the workers they need to fill a recent record number of job openings. There has also been a record high number of workers quitting jobs.

And earlier Wednesday, the International Alliance of Theatrical Stage Employees — which represents technicians, artisans and craftspersons in the entertainment industry — announced it had set a strike deadline for early Monday morning if they couldnot reach a new contract with the Alliance of Motion Picture and Television Producers for 60,000 film and television workers. The union said that 98.6% of members had voted to authorize a strike if there is no new deal by then.

However, the US Labor Department reports that the number of strikes so far this year is actually down compared to the same period of 2019, the year before the Covid-19 pandemic riled labor markets.

Overall wages are up, as it appears that employers — both unionized and nonunion — are more willing to give workers what they want to keep them on the job.

The strike at Deere & Co., the formal name of the company popularly known as John Deere, shuts operations at 11 factories in Illinois, Iowa and Kansas, and three distribution centers in Georgia, Illinois and Colorado. The company makes both agricultural and construction equipment. Demand for its products has been strong.

The company said in August that it sees growing orders through the rest of this fiscal year that runs through November 1, and into the first fiscal quarter of next year.

The rejected contract for UAW members at John Deere would have given them immediate raises in their base pay of 5% to 6%, and additional wage increases later in the contract that could have increased average pay by about 20% over the six years of the rejected deal. It also eliminated a second lower tier of pay for some more recent hires of the company, bringing them up to the pay of other UAW members.

The average production worker at Deere made about $60,000 last year, and could end this contract earning about $72,000.

Among the features of the rejected contract was the return of a cost of living adjustment — once a common feature of union contracts that has become rare in recent years. But it could have been lucrative at a time that inflation is running at levels not seen for decades. It also included improvements in benefits, including an enhanced retirement bonus of up to $50,000.

"John Deere is committed to a favorable outcome for our employees, our communities and everyone involved," said Brad Morris, vice president of labor relations for Deere. "We are determined to reach an agreement with the UAW that would put every employee in a better economic position and continue to make them the highest paid employees in the agriculture and construction industries. We will keep working day and night to understand our employees' priorities and resolve this strike."

But unlike the last two UAW contracts at Deere, which were negotiated during difficult times for the company, these negotiations took place at an especially good time for the company.

That might have made reaching an agreement that membership would embrace more difficult. The current financial success at Deere may have led some of the union members to believe they deserved an even better package than the one that was rejected, especially after less lucrative deals in the past.

"These are skilled, tedious jobs that UAW members take pride in every day," said Mitchell Smith, a regional director for the UAW. "Strikes are never easy on workers or their families but John Deere workers believe they deserve a better share of the pie, a safer workplace and adequate benefits."

The company has been hiring during the last year as well, as union-represented jobs at Deere climbed 19% since November 1 of 2020.

Shares of Deere are up 23% year-to-date, although Wednesday's close was off 16% from where shares stood in early September. The stock was little changed in trading Thursday but is down about 4% since the vote results were announced Sunday night.