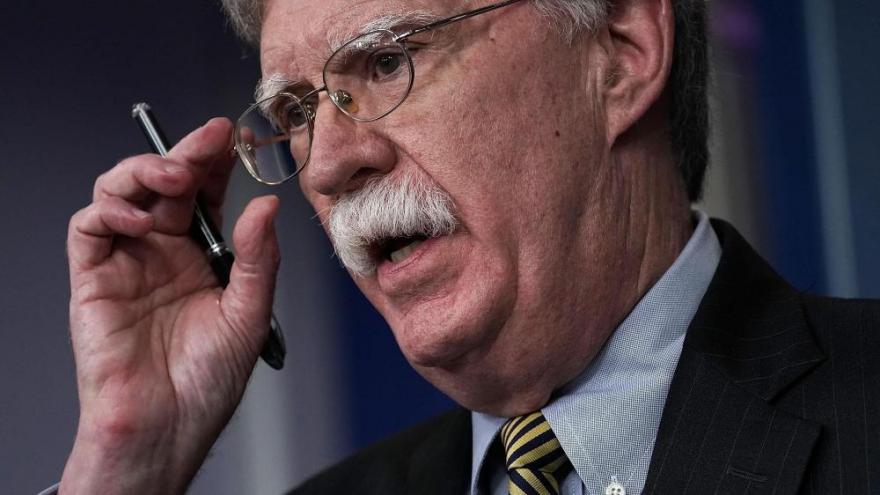 (CNN) -- Former White House national security adviser John Bolton said Monday he is willing to testify — if he is subpoenaed — in the Senate's impeachment trial of President Donald Trump.

Bolton issued a statement Monday after the courts did not rule whether he would be compelled to testify during the House's impeachment proceedings, saying he was trying to meet his "obligations both as a citizen and as former national security adviser."

"Accordingly, since my testimony is once again at issue, I have had to resolve the serious competing issues as best I could, based on careful consideration and study," Bolton said. "I have concluded that, if the Senate issues a subpoena for my testimony, I am prepared to testify."

Bolton is potentially a crucial witness, as he had firsthand knowledge of many of the events that formed the House's impeachment of the President over his dealings with Ukraine. The House sought his testimony but ultimately never subpoenaed Bolton, and Democrats withdrew their subpoena for his former deputy after it was challenged in court, as Democrats wanted to move forward with their impeachment probe and not wait for the court's decision.

Bolton's statement is likely to put new pressures from Democrats on Senate Majority Leader Mitch McConnell to allow witnesses in the Senate trial, which Senate Democratic Leader Chuck Schumer and Democratic House leaders have pushed for.

"It is now up to four Senate Republicans to support bringing in Mr. Bolton, and the other three witnesses, as well as the key documents we have requested to ensure all the evidence is presented at the onset of a Senate trial," Schumer said in a statement. "Given that Mr. Bolton's lawyers have stated he has new relevant information to share, if any Senate Republican opposes issuing subpoenas to the four witnesses and documents we have requested they would make absolutely clear they are participating in a cover up."

But Bolton's statement is unlikely to change McConnell's strategy over Trump's impeachment trial, according to multiple GOP sources familiar with the matter.

McConnell has rejected Democratic demands to require that the ground rules of the trial include testimony of Bolton and three other witnesses, along with documents withheld by the White House. He says such decisions about witnesses and documents should be made after opening arguments, though Democrats fear that's an attempt to prevent any witnesses from testifying at all.

Several GOP sources familiar with the matter say that Bolton's Monday announcement will not sway McConnell. "Not at all," one source said.

McConnell plans to reiterate his view to Senate Republicans during a closed-door lunch on Tuesday, a source said.

Ultimately, issuing a subpoena for Bolton would require 51 votes in the Senate, meaning at least four Republicans would have to join 47 Democrats. Schumer said on the Senate floor Monday that Democrats would force senators to vote on the witnesses they were seeking, including Bolton.

Bolton left a message with McConnell before he put out the statement to give him a heads up that it was coming, according to a source familiar with the matter. The White House was not informed.

Amid the Senate's impasse, House Speaker Nancy Pelosi has yet to formally send the two impeachment articles to the Senate after the House passed them last month.

Until the House formally sends the articles, McConnell has said the trial will not start. But he's dismissed the idea that Democrats can enact any concessions by withholding the articles.

Pelosi had no advanced knowledge of Bolton's statement, but a senior Democratic aide said Pelosi's decision to withhold the articles played a role.

"We would not have this development absent the speaker's hold," the senior Democratic aide said. "Another proof point that indicates the value of her strategy."

Pelosi tweeted Monday that Trump and McConnell "have run out of excuses."

"They must allow key witnesses to testify, and produce the documents Trump has blocked, so Americans can see the facts for themselves," she said. "The Senate cannot be complicit in the President's cover-up."

Lawmakers return to Washington this week to resume the impeachment fight that's largely in the same position it was before Congress left town for the holidays. The major developments with Iran have added a new wrinkle to the battle between congressional Democrats and the White House, but it's unlikely to shift the calculus on the impeachment trial.

Even as Congress balances two of its most profound powers — authorizing war and impeaching a president — the looming Iowa caucuses also create a remarkable convergence heading into Trump's fourth year in office.

It's an unlikely trio of distinct events — Iran, impeachment and Iowa — now inexplicably linked in a deeply divided capital and country.

While Democratic candidates vying for the right to challenge Trump were already bracing to be overshadowed by impeachment in January, their primary fight could now be influenced by the party's divisions on foreign policy.

Speaking on the Senate floor Monday, McConnell did not address Bolton's new statement but reiterated that he believes witnesses should be dealt with later in the trial. The Republican leader accused Pelosi and Democrats of playing "political games" with impeachment by withholding the articles.

"Speaker Pelosi is now sitting on the articles she claimed were so very urgent. She's delayed this indefinitely so that the architects of the failed House process can look for ways to reach over here into the Senate and dictate our process as well," McConnell said. "These bizarre stunts do not serve our Constitution or our national security. They erode both."

Utah Sen. Mitt Romney, one of the Republican senators Democrats are eying to break ranks from McConnell on witnesses, told CNN on Monday "of course" he would like to hear from Bolton. "I'd like to hear what he has to say," Romney said.

Asked if he would vote to subpoena Bolton, however, Romney stopped short and said he first would want to know what the process is.

Sen. Susan Collins of Maine, another key GOP voice in the impeachment trial, said Monday that she views the trial in three stages -- presentations, then senator questions and then discussion over whether to have witnesses -- which lines up with McConnell's proposal. Collins said she's interested in hearing from Bolton in the third stage but showed no inclination to push to bring him in before that point.

"It's very difficult to decide that until we go through the first two stages," she said.

Sen. John Cornyn, a Texas Republican in Senate leadership, initially told reporters he "has no objection" to Bolton testifying "by deposition or some pre-recorded testimony," but he later indicated he would not vote to subpoena him and warned against a "circus-like atmosphere" like the one he believes took place in the House.

He repeatedly said that he thought Bolton's testimony would be stifled by executive privilege that he said would likely be invoked by Trump on much of what Bolton would have to say.

"He can't really waive executive privilege — it's not his to privilege, it's the President's privilege," Cornyn said.

And Sen. John Thune of South Dakota, the Senate's No. 2 Republican, rejected the calls for the Senate to subpoena Bolton, arguing that's a step the House should have taken during the impeachment inquiry.

"If it was supposed to be, I think they would have done it in the House," Thune said. "To me, they could have subpoenaed him. They didn't."

Bolton's testimony was sought in the House by Intelligence Chairman Adam Schiff, a California Democrat, during the House's impeachment investigation into Trump's dealings with Ukraine. But Bolton's former deputy, Charles Kupperman, who has the same lawyer as Bolton, filed a lawsuit after he was subpoenaed, arguing the White House was directing him not to testify and the courts should decide the issue. Instead, the House withdrew its subpoena of Kupperman and did not issue a subpoena for Bolton after his attorney indicated he would go the same route.

Bolton is one of several witnesses that House Democrats sought whom Senate Democrats are now pushing for in the Senate trial, including acting chief of staff Mick Mulvaney and White House aide Rob Blair.

The new statement comes after Bolton was both surprised and curious that he had not been subpoenaed by the House, according to the source familiar with the matter. There had been mounting criticism that he wanted to hold off on sharing what he knew about the withholding of aid to Ukraine for his book. It is unclear what specifically triggered him to put out this statement right now.

It is unclear what Bolton will do if the White House tries to block his testimony, or parts of it, the source said. But the statement speaks for itself in that he is prepared to provide testimony.