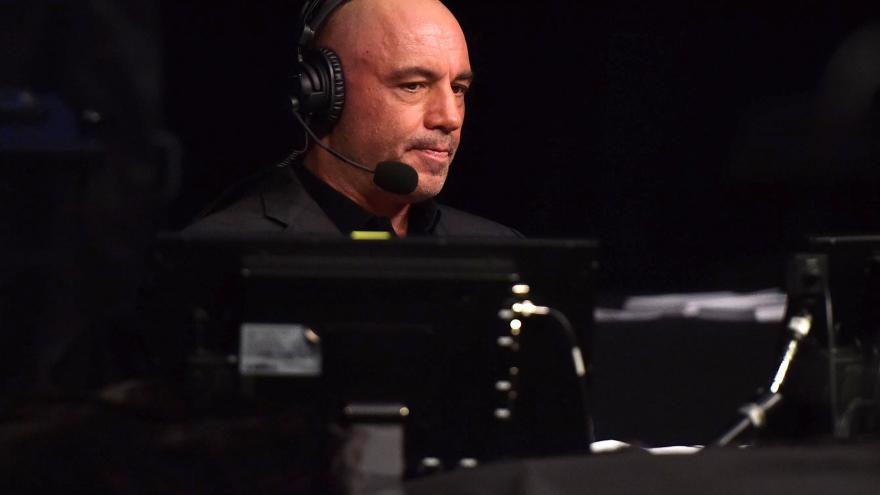 (CNN) -- Joe Rogan issued an apology on Instagram Saturday after artist India Arie posted a compilation of the podcaster frequently using the N-Word on his podcast.

Rogan used the word more than 20 times in the clips, which he said were compiled over a span of 12 years. In his apology, Rogan said it's the "most regretful and shameful thing" he has ever had to address publicly.

"I know that to most people, there's no context where a White person is ever allowed to say that, never mind publicly on a podcast, and I agree with that," he said. "Now, I haven't said it in years," Rogan added.

Arie used the #DeleteSpotify hashtag to her almost 1 million followers on Instagram.

Rogan "shouldn't even be uttering the word," Arie said. "Don't even say it, under any context. Don't say it. That's where I stand. I have always stood there."

"They take this money that's built from streaming, and they pay this guy $100 million, but they pay us like .003% of a penny," Arie said on Instagram. "Just take me off. I don't want to generate money that pays that."

According to a 2021 report from The New York Times, music industry estimates place Spotify's payout rate to musical artists at a half-cent per stream, a rate that is often divided among record companies and artists.

Spotify quietly removed more than 70 episodes of Joe Rogan's podcast Friday, according to the tracking site jremissing.com. The streaming company has not returned CNN Business' request for comment on whether the removal is related to the controversy surrounding the podcaster.

Rogan's show on Spotify, which he joined in September 2020, has more than 1,700 numbered episodes. The episodes that were removed predate the pandemic.

Neil Young was the first recording artist to ask that his music be removed from the platform on January 25. He was joined by Joni Mitchell shortly after and a growing list of musicians and personalities then followed them to call out Spotify or to leave the channel. Spotify exclusively hosts the popular podcast, "The Joe Rogan Experience," on which Covid-19 vaccine misinformation has been spread.

Spotify responded to criticism, saying it is adding a content advisory to any podcast episode -- not just Rogan's -- that includes discussion about Covid-19, a move Rogan has said he agrees with.

"It's become clear to me that we have an obligation to do more to provide balance and access to widely-accepted information from the medical and scientific communities guiding us through this unprecedented time," CEO and co-founder Daniel Ek said in a statement earlier this week.

Spotify has not yet responded to CNN with comment on Rogan's past use of racial slurs. Rogan claims that he previously used the N-Word word as part of a context -- such as when he discussed a Richard Pryor album or the repeated use of the word in Quentin Tarantino's 1994 film "Pulp Fiction."

"There's nothing I can do to take that back," Rogan said. "... I do hope that if anything, that this can be a teachable moment, because I never thought it would ever be taken out of context and put in a video like that."

Rogan said in his apology he's "not racist."

"Whenever you're in a situation where you have to say, I'm not racist, you f**ked up, and I clearly have f**ked up," Rogan said.

Rogan also addressed a video of him comparing a Black neighborhood to a Planet of the Apes movie. "I certainly would never want to offend someone for entertainment with something as stupid as racism," Rogan said.

Last week, Rogan also brought up the subject of race in an episode of his podcast with guest Jordan Peterson, a Canadian psychologist and climate change skeptic. After a brief discussion of the "spectrum of shades of people," Rogan said it was strange to call someone Black or White based on their skin tone.