Joe Manchin is key to Biden's agenda. Here's why he has so much influence 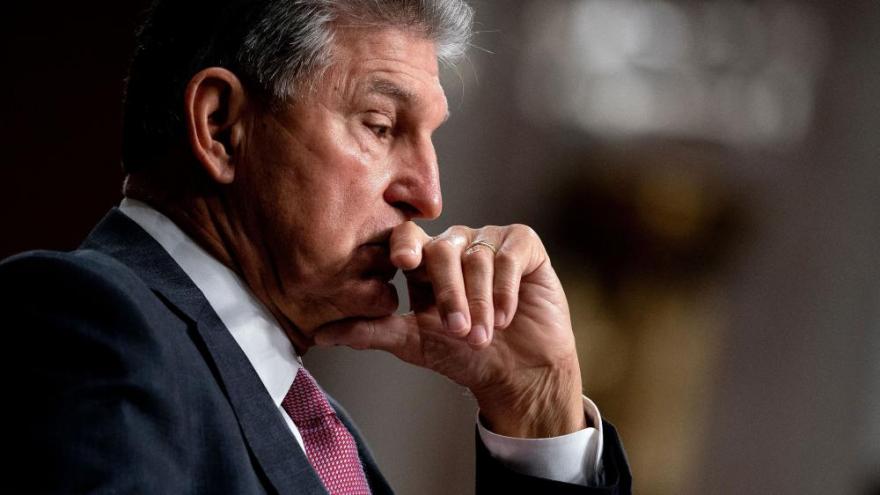 (CNN) -- Democratic Sen. Joe Manchin of West Virginia is one of the most powerful Democrats on Capitol Hill, the man who holds the key vote to much of President Joe Biden's agenda.

So when he announced his support on Wednesday night on an energy and health care bill -- a major breakthrough following more than a year of negotiations -- Manchin, often the singular target of enraged Democrats who view him as uniquely responsible for holding back the progressive movement, was now singularly responsible for delivering some of the parties' long-sought legislative priorities.

In a statement announcing the deal, Senate Majority Leader Chuck Schumer made sure to single out the mercurial Manchin.

"I thank Senator Manchin for his willingness to engage and his commitment to reaching an agreement that can earn the support of all 50 Senate Democrats," Schumer said.

The praise was a far cry from the terse words issued by the White House in December following Manchin's abandonment of the $3.5 trillion Build Back Better plan. The White House directly accused Manchin of making a "sudden and inexplicable reversal in his position, and a breach of his commitments to the President."

Pressed repeatedly to detail Biden's engagement ahead of the deal, Bedingfield declined to read out any private conversations, but said, "a tremendous amount of effort by a lot of parties has gone into getting here, and it takes persistence and it takes hard work."

Wednesday's deal was the result of a weekslong negotiation between Manchin and Schumer. The West Virginia senator earlier this month appeared to squash any hope Democrats had to pass legislation to address the climate crisis. Manchin had previously said "unequivocally" that he would not support the Democratic economic package's climate or tax provisions, even after Schumer pared back the climate provisions to appease him.

The two senators quietly revived talks on July 18, however, and locked down the deal that was announced on Wednesday, which has earned the White House's endorsement.

While only some details have been disclosed, the measure would invest $369 billion into energy and climate change programs, with the goal of reducing carbon emissions by 40% by 2030, according to a one-page fact sheet.

The new package includes a number of provisions that the moderate West Virginia Democrat had privately scoffed at -- such as electric vehicle tax credits.

But there will be a lower income threshold for people who can use the tax credits, which Manchin had demanded.

The deal keeps changes to prescription drug prices that Manchin had previously agreed to, including empowering Medicare to negotiate the price of certain costly medications administered in doctors' offices or purchased at the pharmacy.

A Democrat in a red state

Manchin represents the deeply red state of West Virginia, where voters turned out strongly in support of former President Donald Trump in both the 2016 and 2020 presidential elections. The Democratic Party once held major sway in the state, but its standing has eroded over the years. In 2017, the state's governor Jim Justice announced at a rally with Trump that he was switching parties from Democrat to Republican.

But Manchin has maintained a base of support in the state, and despite facing attacks from all sides, he has managed to keep winning reelection to the Senate, most recently in 2018. On Capitol Hill, he chairs the Senate Energy and Natural Resources Committee and is a member of the Senate Democratic leadership team.

Before coming to Washington, Manchin served as the governor of West Virginia and before that served as a state legislator.

Manchin has previously said that he has an open line of communication with the White House and a good relationship with Biden and Vice President Kamala Harris.

Of Biden specifically, he told CNN last year, "Whenever he calls me, he calls and then we have a good conversation. We've had a good friendship and relationship for a long time. We understand each other."

"Kamala and I have been friends," Manchin told CNN at the time. "We sat together and had a great relationship ... and still do. And the vice president and President is and always will be invited, no matter who they may be, to the state of West Virginia, and I'll be there to meet them."

Manchin told CNN in 2017 that his rapport with Trump, however, was better than his relationship with former President Barack Obama, of which he said, "there was none."

Manchin broke with Democrats in the midst of a highly contentious Supreme Court confirmation fight over Brett Kavanaugh to vote with Republicans in support of the nominee.

He also supported Trump's first Supreme Court nominee, Neil Gorsuch, but he opposed what he described as the "rushed confirmation" of Amy Coney Barrett, Trump's final nominee to the high court.

Manchin also stood with Democrats in opposition to Trump and GOP efforts to repeal the Affordable Care Act and push through a Republican tax bill.