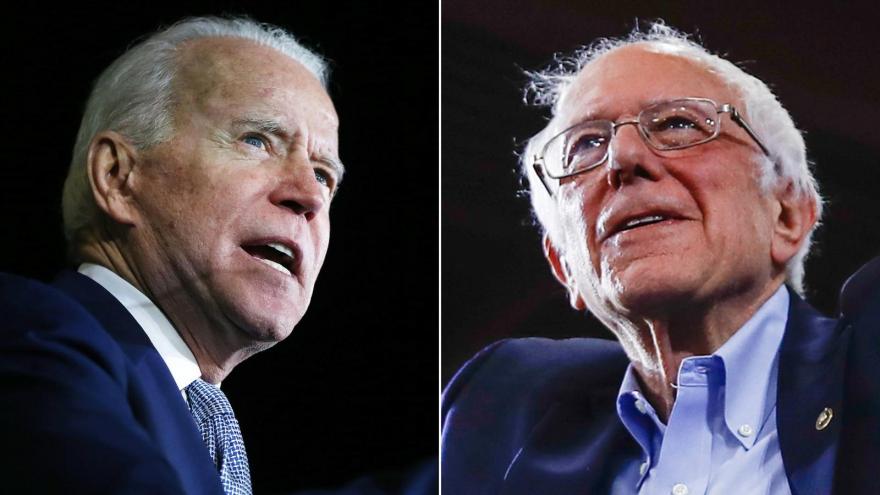 (CNN) -- Former Vice President Joe Biden dashed Vermont Sen. Bernie Sanders' hopes of igniting a comeback and moved into a dominant position in the Democratic nomination battle with a run of impressive victories on Tuesday night.

Biden raised the first doubts about Sanders' future in the race when he pulled off a crushing victory in the key Midwest swing state of Michigan, to add to earlier victories in Missouri and Mississippi on a night of six contests. He added Idaho to his haul early on Wednesday morning, and Sanders won in North Dakota, CNN projects.

His big night cranked up the pace of his hot streak that started when he rescued a misfiring campaign in South Carolina and swept to massive wins on Super Tuesday last week.

The former vice president's formidable performance is likely to take his campaign, which is now consolidating almost all of the party's major power centers with the exception of the Sanders progressive wing, from strength to strength. Sanders' vow to pull off a democratic socialist revolution now looks in serious doubt amid fears that he is too radical to beat President Donald Trump in a general election.

One reason for that is that the Biden victory appears to badly damage Sanders' narrative that his strengths among working class and younger voters could take him to the Democratic nomination and make him the best possible candidate to take on Trump. Four years ago, Sanders narrowly won the Great Lakes State over Hillary Clinton, but he was heading for a massive defeat this time around.

With 85% of the vote counted in Michigan, Biden leads by more than 160,000 votes. Biden stretched his lead in the delegate count to more than 100, not yet halfway through a month that includes a string of contests that look favorable to his campaign. The proportional rules used in the Democratic primary make it very tough for a candidate to bounce back after falling behind in the delegate race.

Biden reached out to Sanders' supporters as the Vermont senator reached a moment of decision about the future of his campaign.

"I want to thank Bernie Sanders and his supporters for their tireless energy and their passion," Biden said in a muted but forceful victory speech at Philadelphia's National Constitution Center after his planned Ohio rally was called off due to the coronavirus emergency.

"We share a common goal and together we will defeat Donald Trump. We will defeat him together. We are going to bring this nation together," Biden said.

Still, Sanders has a fundraising juggernaut and can stay in the race as long as he likes. He also has a track record from 2016 that suggests he may be determined to fight on for the policy platform he has been promoting for almost all of his life.

The story in Michigan was similar to the one the former vice president engineered on Super Tuesday. Biden's support among African American voters in urban areas and suburban white voters appears not just to be overwhelming Sanders but could be a good sign as Democrats try to take back Michigan and other Midwestern swing states on Election Day.

Earlier Tuesday, the former vice president stacked up two more wins in Mississippi -- where his strength among African American voters paved the way to victory -- and the Midwestern battleground of Missouri, CNN projects. Biden's victory confirmed his strength among African American voters in Southern states and gives him bragging rights in a heartland tussle.

Tuesday's races, which also include primaries in Washington state and caucuses in North Dakota, are taking place against the increasingly grim backdrop of the worsening coronavirus crisis. Both Biden and Sanders canceled planned election night rallies in another key state, Ohio, that goes to the polls next week. The former vice president plans instead to give an address without an audience at Philadelphia's National Constitution Center.

The contest in Washington was too early to call Wednesday morning.

Officials in Super Tuesday II states were disinfecting polling booths in an effort to prevent further infections from the novel coronavirus. Luckily, the primary in Washington state, one of the worst hit regions, mostly involves mail-in ballots. Officials still cautioned voters not to lick the envelopes containing their ballots.

Biden's run of victories, and his dominant performance in Michigan especially, left Sanders facing existential questions about his campaign.

Sanders flew back home to Burlington and there was silence from his camp, with the Vermont senator electing not to give a speech as results came in. His campaign has been losing steam ever since he won the New Hampshire primary and the Nevada caucuses in February, that at the time looked like they might set him on a glide path to the nomination.

But Sanders' success in those contests may ultimately have sown the seeds of his eventual demise. Rising expectations that he could win the primary race appeared to be the trigger that convinced more moderate Democratic candidates like former South Bend, Indiana, Mayor Pete Buttigieg and Minnesota Sen. Amy Klobuchar to quit the race and line up behind Biden.

A top Sanders surrogate -- progressive star Rep. Alexandria Ocasio-Cortez of New York -- said there was no way to dress up Sanders' night.

Still, Sanders has a fundraising juggernaut and can stay in the race as long as he likes. He also has a track record from 2016 that suggests he may be determined to fight on for the policy platform he has been promoting for almost all of his life. He is due to take on Biden in a CNN debate -- that will now take place without an audience owing to the coronavirus crisis -- on Sunday night in Arizona.

Sanders knew that Tuesday could be a disappointing night, advisers said, but he did not expect such a crushing defeat in Michigan. He was counting on the state to revive his campaign and show that his coalition could grow.

Advisers are not certain what will come next, telling CNN that it's a decision that the senator and his wife, Jane Sanders, will make together. But the adviser said Sanders is still intent on debating Biden on Sunday. After that, it's an open question, with a tough road of primaries ahead in the coming weeks.

Biden builds his base

After Biden's big wins over the last two weeks, Michigan became a pivotal race -- for the front-runner to demonstrate his new strength is genuine and for Sanders to put a stake in the ground and regroup after a run of defeats.

The first big Midwest swing state to vote in the Democratic race ought to have been home turf for Sanders given his strong connection to working class white voters and his populist message on trade. Such a recipe helped Trump become the first Republican since George H.W. Bush in 1988 to capture the state as he headed to the White House in 2016.

Yet Biden also has a long history and connections in the state, and has been lifted by the consolidation of the moderate Democratic field around him since his South Carolina triumph. Michigan will hand out 125 pledged delegates on Tuesday night, the most on offer on the second Super Tuesday.

The former Delaware senator was part of Barack Obama's presidential ticket that won Michigan twice. He's touted his role in securing a bailout during the Great Recession that saved iconic auto giants that are major employers, and have tributary supply chains, throughout the state. Biden is banking on a coalition of African American voters in cities like Detroit and suburban college educated white voters.

But recent results have also seen him increasing his share of other white voters, and he has a legacy of tight ties with labor unions -- a traditionally strong Michigan constituency -- that could help him move onto Sanders' turf.

This story has been updated with developments throughout the night.