Joe Biden sweeps the night and wins Florida, Illinois and Arizona to extend his delegate lead over Bernie Sanders 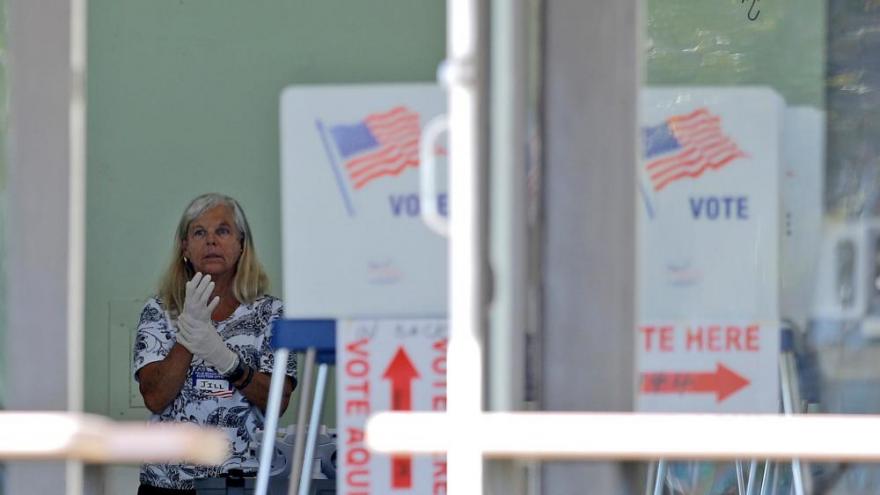 Voters in Arizona, Florida and Illinois went to the polls Tuesday.

(CNN) -- Former Vice President Joe Biden will sweep Tuesday's races and win the Arizona, Illinois and Florida Democratic primaries, CNN projects, victories that will allow him to substantially expand his delegate lead over Vermont Sen. Bernie Sanders as they vie for the Democratic nomination.

Voters in Florida, Illinois and Arizona cast ballots Tuesday as the number of novel coronavirus cases in the US continued to rise at an alarming rate. The primaries came at a time when state and local officials are clearly conflicted about the ethics of asking Americans to leave their homes -- officials in Ohio postponed the state's primary Tuesday -- as many at-risk Americans followed the government's guidance to self-isolate in an effort to slow the spread of the pandemic.

Biden's victories in Arizona Illinois and Florida did not come as a surprise. The former vice president has consistently led in the polls since his streak of victories in South Carolina and the two Super Tuesday contests -- buoyed in part by the fact that more voters trust him to handle a crisis like the current pandemic.

Another big night for Biden

Once again -- in both Illinois and Florida -- black voters, voters over 65 and moderates formed Biden's winning coalition. More than three-quarters of each of those groups in the CNN primary poll supported the former vice president over Sanders.

Biden's projected win in Florida was long expected given his advantage among older voters and the fact that Sanders lost the state to former Secretary of State Hillary Clinton in 2016. But Biden has turned out to be a stronger match for Sanders than Clinton among some demographic groups. Just about a quarter of white men backed Sanders this year in Florida, compared with 52% in 2016.

Sanders also did not do as well as he did in 2016 with independents in the Sunshine State. Half of Florida's independent voters backed Biden, according to CNN's primary poll. In 2016, 55% of independents backed Sanders.

The Biden campaign had expected a big night on Tuesday. In a campaign memo, Biden's deputy campaign manager, Kate Bedingfield, touted the level of early voting in Arizona, Florida and Illinois while noting that in-person voting is likely to be down on Tuesday.

Noting Biden's delegate lead, Bedingfield argued that "it would take a drastic, historically incomparable swing for Senator Sanders to win more delegates than Biden today or to close the delegate differential."

Biden spoke from his home in Delaware after his wins in Illinois and Florida, and thanked the poll workers who cleaned and disinfected voting booths throughout the day to help ensure voters maintained a safe distance from one another.

"Our campaign has had a very good night," Biden said via a livestream. "We've moved closer to securing the Democratic Party's nomination for president, and we're doing it by building a broad coalition that we need to win in November, with strong support from the African American community, the Latino community, high-school educated people like the folks I grew up with in my own neighborhood -- labor, teachers, suburban women, veteran firefighters and so many more."

Striking a tone of unity, he argued that he and Sanders "may disagree on tactics" but said they shared a common vision: the need for affordable health care, reducing income inequality and tackling "the existential threat of our time, climate change."

"Sen. Sanders and his supporters have brought a remarkable passion and tenacity to all of these issues. Together they have shifted the fundamental conversation in this country," Biden said. "So let me say especially to the young voters who have been inspired by Sen. Sanders, I hear you. I know what to stake. I know what we have to do. Our goal is as a campaign, and my goal as a candidate for president is to unify this party, and then to unify the nation."

Majorities of Democratic voters in all three states said their top concern was defeating President Donald Trump, who earned enough delegates to clinch the Republican nomination for president on Tuesday night.

In the battleground state of Arizona, about 7 in 10 voters said they are angry about the Trump administration. The CNN primary polls were conducted by Edison Research for the National Election Pool; they were based on telephone polls conducted before Election Day.

The potential recession is also a top of mind for Americans. In Illinois, many voters said they were concerned about the direction of the nation's economy, with about half of voters in the state saying they were very worried about the direction of it. CNN reported Tuesday evening that Treasury Secretary Steven Mnuchin warned Republican senators that the unemployment rate could hit 20% due to the crisis.

Sanders on the brink

Sanders, meanwhile, tacitly acknowledged that he had a tough night by speaking very early -- before the polls had even closed -- and by largely ignoring the election in his remarks as he focused on the nation's response to the coronavirus outbreak and his concerns about its impact on "working families."

He warned that the nation is bracing for "an economic meltdown that will impact tens of millions of workers in this country."

"In this moment of crisis, it is imperative that we stand together," Sanders said. The crisis, he said, "will require an unprecedented amount of money."

"My own guess is that we'll be spending at least $2 trillion in planning to prevent deaths, job losses and to avoid an economic catastrophe," the Vermont senator said.

Given Biden's potentially insurmountable delegate count, Sanders is facing a critical decision about his future, with one adviser telling CNN's Jeff Zeleny that the senator must weigh whether staying in the race is the best way to keep his movement alive.

"If he ends his candidacy, will someone else step into the void and lead the movement?" the adviser said. "Is the best way to stay relevant by staying around for the rest of the race?"

Sanders is tightening his circle, aides say, with perhaps only himself and his wife, Jane, involved in the final decision making. Almost no one else knows what he will do, or when.

If the coronavirus pandemic were not escalating -- and the country were not gripped by uncertainty -- advisers have no doubt he would stay in the race for the duration, intent on forcing Biden to move his agenda in a more progressive direction.

In recent weeks, the two remaining contenders have both tried to convince voters they would be the most competent leader in this time of crisis -- with Sanders arguing that the coronavirus disruptions have underscored the fragility of the social safety net.

Ohio had also been slated to vote on Tuesday, but Republican Gov. Mike DeWine took drastic measures after a judge denied his request to move the primary to June. DeWine maneuvered around the courts by having Ohio Health Director Dr. Amy Action order a shutdown of the polls due to the public health emergency.

"It was simply untenable for us to continue telling Ohioans, go to the polls. So the governor made a difficult but ultimately the right decision," Ohio Secretary of State Frank LaRose said on CNN's "New Day" Tuesday.

He noted that state officials have asked people over 65 to stay in their homes and that the primary would be postponed until June 2. The Ohio Democratic Party went to the Ohio Supreme Court Tuesday night to ask for an order ensuring that the primary takes place.

Georgia, Maryland, Kentucky and Louisiana have also moved their primaries to later dates.

Sanders and Biden have suspended their in-person campaign events and ordered aides to work at home. Sanders signaled in a tweet Tuesday that he was more concerned about the safety of individual voters than the overall results.

Some voters showed up to vote in person even as restaurants, bars and schools in Illinois closed and state officials urged people to limit their trips outside of their homes. By Tuesday afternoon, the line outside of the polling place stretched for blocks, as poll workers enforced a one-in, one-out policy to encourage distancing inside.

But the process did not run smoothly everywhere. In suburban Chicago, election judge Kim Inman arrived at her polling place Tuesday to find that the hand sanitizer and disinfecting wipes promised by Cook County officials had not arrived. Meanwhile, the precinct was operating with just half its election judges, after some had dropped out "due to sickness or fear," Inman said. By the afternoon, voters had stepped in -- donating their own Wet Wipes and travel-sized hand sanitizer to the polling place.

The Centers for Disease Control and Prevention has recommended no gatherings of 50 people or more over the next eight weeks; and the White House on Monday said Americans should not congregate in groups of more than 10, while older Americans were asked to stay home.

In Florida, at least 79 polling sites were relocated, largely to keep them away from the at-risk population in assisted living centers. In Maricopa County, Arizona -- where 60% of the state's population is concentrated -- officials decided to close 80 polling locations in an effort to consolidate operations.

Arizona Republican Gov. Doug Ducey said election leaders were "working overtime to ensure that voting is safe." Secretary of State Katie Hobbs argued that the state needed to go forward with voting Tuesday, because the uncertainty would only increase in the coming months.

"There are thousands of workers in communities across the state that must continue the job of counting the ballots in the days following the election," Hobbs said. "The longer we wait, the more difficult and dangerous this will become."

This story has been updated with developments throughout Tuesday night.