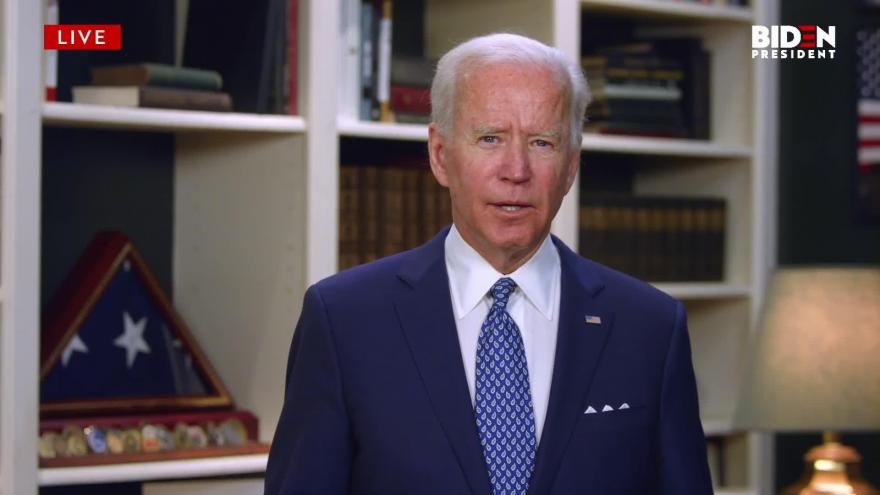 Former Vice President Joe Biden said Friday he spoke with the family of George Floyd, the black man who died this week at the hands of a police officer in Minneapolis.

(CNN) -- Former Vice President Joe Biden said Friday he spoke with the family of George Floyd, the black man who died this week at the hands of a police officer in Minneapolis.

"I was truly impressed with their courage and their grace during this unimaginably painful time," Biden told CNN's Don Lemon on "The Situation Room."

The presumptive Democratic presidential nominee said he had spoken with Floyd's family about Saturday marking five years since his son Beau had died of brain cancer.

"I tried to give them some solace in terms of how the memory, the memory and meaning of George's life, would live with them," Biden said.

Earlier in the day, Biden called on Americans to confront racial injustice in the nation and said it was "time for us to take a hard look at the uncomfortable truths." His remarks came after days of protests in Minneapolis and across the country over Floyd's death.

"Weeks like this we see it plainly that we're a country with an open wound. And none of us can turn away. None of us can be silent. None of us can any longer, can we hear the words 'I can't breathe' and do nothing," Biden said in a broadcast from his home in Delaware.

"We need real police reform, to hold cops to a higher standard that so many of them actually meet, that holds bad cops accountable and repairs relationships between law enforcement and the community they're sworn to protect."

After Floyd's death, a video surfaced showing the 46-year-old handcuffed and on the ground saying, "I can't breathe," as a white police officer's knee was on his neck. Four Minneapolis police officers involved in Floyd's death were fired.

Minnesota Gov. Tim Walz, a Democrat, said Friday at a news conference that he expects "swift" justice for the officers involved.

On Friday, Derek Chauvin, the officer who held Floyd down, was taken into custody, according to John Harrington, the commissioner of the Minnesota Department of Public Safety.

Biden told CNN that if he were president he would call for the Department of Justice to conduct a civil rights investigation.

"This man had his knee on a man's neck up against the curb for nine minutes. You know, I don't know what else, what other conclusion can be reached," Biden said. He added that the protesters have "a right to be in fact angry and frustrated."

More than 500 Minnesota National Guard personnel were mobilized to several locations in the Minneapolis area as protesters have looted businesses and late Thursday night set a police precinct on fire.

In his earlier remarks, Biden spoke to the "constant anxiety and trauma" experienced by black people in America, and said, "Imagine if every time your husband or son, wife or daughter left the house, you feared for their safety from bad actors and bad police."

He referenced an incident earlier this week where a video surfaced of a white woman calling the police on a black man. The man was birdwatching in Central Park and and the two had a dispute over her unleashed dog. The video went viral and prompted calls of outrage, and the woman, Amy Cooper, was later fired from her job.

"This is the norm black people in this country deal with," Biden said. "They don't have to imagine it. The anger and frustration and the exhaustion is undeniable."

"The original sin of this country still stains our nation today, and sometimes we manage to overlook it," Biden said.

"With our complacency, our silence, we are complicit in perpetuating these cycles of violence. Nothing about this will be easy or comfortable, but if we simply allow this wound to scab over once more without treating the underlying injury, we'll never truly heal," he said.

Biden's remarks stand in stark contrast to those of President Donald Trump, who has stoked tensions over the protests and threatened violent police retaliation and military intervention.

Trump called the protesters "THUGS" in a tweet early Friday morning and wrote, "when the looting starts, the shooting starts." Trump's tweet was flagged by Twitter for "glorifying violence" and was affixed a warning label, marking the first time such action has been taken against Trump's Twitter account.

Biden said, "This is no time for incendiary tweets. It's no time to encourage violence. This is a national crisis. We need real leadership right now. Leadership that will bring everyone to the table so we can take measures to root out systemic racism."

Later Friday, Trump said that his tweet was not a threat.

"Looting leads to shooting, and that's why a man was shot and killed in Minneapolis on Wednesday night - or look at what just happened in Louisville with 7 people shot. I don't want this to happen, and that's what the expression put out last night means...." the President tweeted. "....It was spoken as a fact, not as a statement."

This story has been updated with further remarks from Biden.