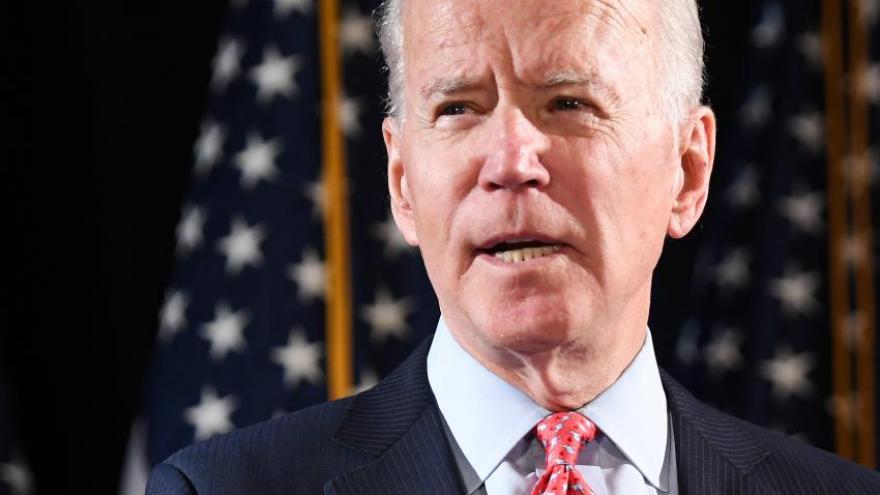 Former US Vice President and Democratic presidential hopeful Joe Biden speaks about COVID-19, known as the Coronavirus, during a press event in Wilmington, Delaware on March 12, 2020.

(CNN) -- Former Vice President Joe Biden said the Democratic National Convention, which has already been pushed back from July to August, may have to go virtual if the coronavirus continues as a public health threat into the summer.

"We may have to do a virtual convention. I think we should be thinking about that right now. The idea of holding the convention is going to be necessary. We may not be able to put 10, 20, 30,000 people in one place," he said in an interview Sunday morning with George Stephanopoulos on ABC's "This Week."

Biden added that how the convention is held depends on whether the public health threat of the coronavirus has been mitigated by that time. "Again let's see where it is," the former vice president said. "And what we do between now and then is going to dictate a lot of that as well. But my point is that I think you just got to follow the science."

CNN previously reported that representatives for the Biden and Sanders campaigns were consulted on the decision to move the Democratic National Convention from July to August, per two Democratic officials.

Democrats had initially picked the mid-July date as a way to hold their convention before the 2020 Summer Olympics in Tokyo. But when the Olympics were delayed by a year due to the coronavirus, the three weeks spanning July and August were open for what Democrats hope will be a major media moment.

The Democratic convention will now happen the week immediately before the Republican convention in Charlotte, North Carolina, and the delay in the convention also puts off any consideration of changing the convention rules to allow delegates to cast their votes remotely. Current convention rules dictate that delegates have to appear in person to nominate a candidate, so a rule change would be needed in order to allow votes to be cast digitally.