Joe Biden said he would pick a woman as his running mate. Here's who could be on his list 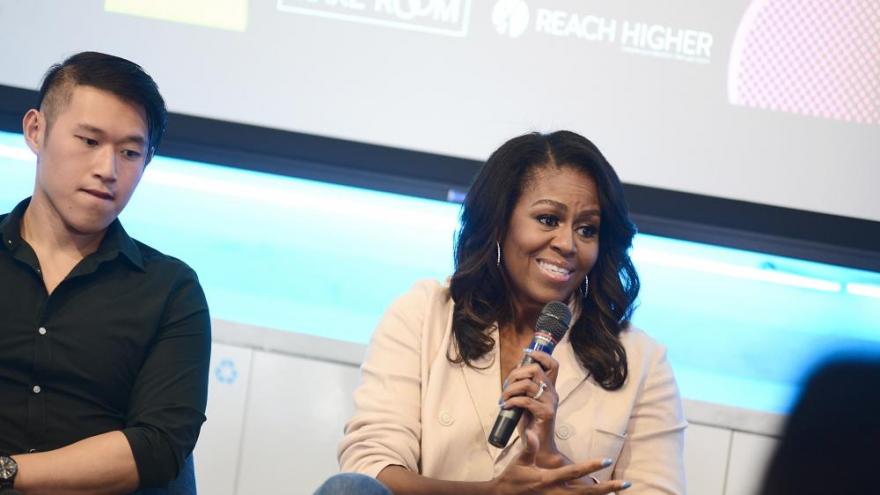 To be clear: This is highly unlikely.

(CNN) -- If Joe Biden wins the Democratic nomination, his running mate will be a woman, he said Sunday, which quickly elevated a small collection of women leaders.

After announcing his commitment to selecting a woman as his running mate, Biden is prepared to run a "vigorous vetting process" to determine his vice president pick should he become the Democratic presidential nominee, according to a Biden campaign official.

"Joe Biden is familiar with the process of selecting a Vice Presidential candidate, having been on the opposite end of the process in 2008," a Biden campaign official says.

The official declined to provide any further details about the process, including when it will begin.

Here is what Biden has said about some of the women who could be his running mate:

Harris, a former Democratic presidential candidate, is widely seen as a top contender to be Biden's running mate.

Biden and Harris are close because the former vice president's late son, Beau Biden, served as attorney general in Delaware at the same time that Harris held that position in California.

After Harris ended her presidential bid -- and announcement that seemed to take Biden by surprise -- the former vice president said he would consider her to be his running mate, should he win the nomination.

"She is solid. She can be president someday herself. She can be the vice president. She can go on to be a Supreme Court justice. She can be attorney general. I mean, she has enormous capability," he said.

When pressed, Biden said he would "of course" consider Harris as a running mate.

In the midst of a tough primary, one where the two got into a high-profile clash at the Democratic debate in June, Harris joked with reporters that "if people want to speculate about running mates, I encourage that, because I think that Joe Biden would be a great running mate."

Klobuchar's endorsement before Super Tuesday helped propel Biden to big wins across the country, but especially in her home state of Minnesota.

When Biden was asked in Iowa if he would commit to a Biden-Klobuchar ticket, he said he would "look very closely" at choosing a woman and said that there were at least eight women who he thinks would qualify for the role.

"I could name for you eight women who would easily qualify to be President of the United States and vice-presidential pick," Biden said.

Biden also said this month that Klobuchar, along with New Jersey Sen. Cory Booker and Harris, were "all capable of being president."

Klobuchar, while stumping for Biden in Michigan recently, slipped and said she "couldn't think of a better way to end my candidacy than join the ticket" before correcting herself and saying, "joining the terrific campaign of Joe Biden."

Warren hasn't endorsed anyone in the Democratic nomination fight since ending her presidential campaign earlier this month, but Biden has been up front about the Massachusetts senator being on his vice-presidential shortlist.

"I'd add Senator Warren to the list," he told Axios in December, before any voting had taken place. "But she's going to be very angry at my having said that. ... The question is would she add me made to her list."

One notable issue: Biden and Warren are ideologically at odds, something that the former vice president has said he would like to avoid when picking his running mate.

The Michigan governor has something going for her: She comes from a state that Democrats see as critical to their success in 2020.

And Whitmer was on stage recently when Biden compared himself to a "bridge" to younger, accomplished Democrats.

"Look, I view myself as a bridge, not as anything else," Biden said. "There's an entire generation of leaders you saw stand behind me. They are the future of this country."

But Whitmer has seemingly already taken herself out of the running.

"I think it is important that he has a woman running mate, to be honest. I think that there are a lot of phenomenal potential running mates for him," Whitmer told MSNBC on Monday. "It's not going to be me, but I am going to have a hand in helping make sure that he has the rounded-out ticket that can win."

Abrams, the Democratic gubernatorial nominee in Georgia in 2018 and the former minority leader in the state House of Representatives, is seen as a rising star in the Democratic Party, leading many top Democrats to privately suggest her as a running mate.

Abrams was among a host of Democratic women Biden said he would see as a potential running mate in November, referring to her as "the woman who should have been the governor of Georgia."

Abrams has devoted herself to voting rights since losing the gubernatorial race and comes from a state where Democrats see the potential to make inroads in 2020 up and down the ballot. But the Georgia Democrat also has very little experience on the national stage.

The two New Hampshire Democratic senators were among women that Biden mentioned in November as potential running mates.

They are both seen as longshot picks -- neither has the name recognition of other possible candidates on this list.

"There's an incredible number of people," Biden said in November, including "the two senators from the state of New Hampshire."

Laura Epstein, a Hassan spokeswoman, responded to Biden's speculation by saying, "Sen. Hassan is flattered to be mentioned, but believes that the biggest impact that she can make for the people of New Hampshire is serving as a U.S. Senator."

Yates, the deputy attorney general under former President Barack Obama, was also mentioned in the list of candidates Biden said he would consider, referring to her as "the former assistant attorney general who got fired."

Sho served as acting attorney general for 10 days in January 2017 before she left the Trump administration, but is an unlikely pick.

Yates, who is from Georgia, endorsed Biden this month.

To be clear: This is highly unlikely.

But Biden, at an event in Iowa earlier this year, was asked by a voter if he would nominate "Obama" to the Supreme Court.

He said yes, but that he likely wouldn't want it. The voter asked, "The question is... which Obama?"

"Well, I sure wish Michelle would be the Vice President," Biden replied with a smile.

The former first lady has said repeatedly that she won't run for office because she is "not interested in politics."