Joe Biden revitalizes his campaign with win in South Carolina 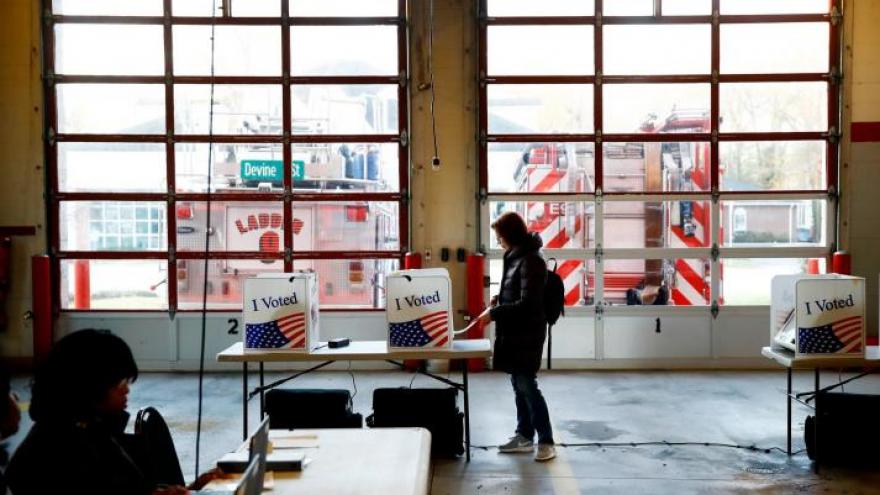 A voter casts a ballot in the South Carolina primary election, Saturday, Feb. 29, 2020, in Columbia, S.C.

(CNN) -- Former Vice President Joe Biden Saturday surged to a strong victory in the South Carolina primary, revitalizing a stalled presidential bid and establishing himself as the main moderate rival to Vermont Sen. Bernie Sanders in the race for the Democratic nomination.

The 77-year-old Biden notched his first-ever nominating contest win, more than three decades after he launched the first of his three campaigns for the White House.

Biden drank the moment in as he took the stage in Columbia, South Carolina, to make victory remarks. He looked forward to the Super Tuesday states and the upcoming race against Sanders, alluding to the Vermonter's history as an independent.

"If Democrats want to nominate someone who will build on Obamacare, not scrap it; take on the NRA and gun manufacturers, not protect them; stand up and give the poor a fighting chance and the middle class get restored, not raise their taxes and keep the promises we make, then join us," Biden said. "And if the Democrats want a nominee who's a Democrat. A lifelong Democrat. A proud Democrat. An Obama-Biden Democrat, then join us."

The question now is whether Biden can use South Carolina as a launchpad, two days ahead of this week's Super Tuesday contests in 15 states and territories in which Sanders, who finished in second, is hoping to build up an unassailable lead in the delegate count.

The contest took place in a charged political atmosphere as Democrats assail President Donald Trump over his handling of the growing coronavirus crisis, as the stock market tumbles and fears of recession threaten to reshape the 2020 battlefield. It also marked the end of the road for businessman Tom Steyer, who sunk more than $20 million into South Carolina and appeared headed for a distant third place finish in the race.

After anemic performances in the first three nominating clashes in Iowa, New Hampshire and Nevada, Biden bet everything on the Palmetto State and its diverse, more moderate electorate. A loss would likely have meant a humiliating end to a half-century-long presidential career, but his win will unleash a comeback narrative.

Biden is likely to walk away with the lion's share of 54 pledged delegates on offer on Saturday — which represent more than half of the 101 delegates previously doled out in the contest.

Going into Saturday, Sanders led the delegate count, with Buttigieg, Biden, Warren and Klobuchar following. Biden's win quickly shot him into second place after 14, just a portion, of South Carolina's delegates were projected.

A total of 1,991 pledged delegates are needed to win the nomination at the first convention ballot.

He can now make the case that he is the only candidate who can inspire one of the most critical slices of the Democratic electorate -- African American voters. And the win raises new questions about Sanders' claim to have broadened his demographic appeal following his failed 2016 campaign.

Minority voters -- especially in cities like Cleveland, Philadelphia, Charlotte, Atlanta and Detroit -- are critical to Democratic hopes of winning back swing states that Trump claimed in 2016 and putting new battlegrounds on the map.

Exit polls suggest that the South Carolina electorate was far more moderate and African American than the states in which Sanders has prospered. The former vice president's securing of last-minute endorsement of the state's political icon Rep. James Clyburn last week also appears to have been crucial.

On stage in Columbia, Biden paid tribute to that endorsement.

"My buddy Jim Clyburn, you brought me back," he said.

Biden's win was built on a base rooted in black voters, those over the age of 65 and moderates, according to preliminary results.

Biden won around 3 in 5 black voters, dominating over Sanders, his closest competitor who got almost 1 in 5 of the group. Steyer came close to Sanders, with around 1 in 7 black voters.

Almost 3 in 5 voters over the age of 65 supported Biden in his run in South Carolina, followed by Steyer and Sanders with slightly more than 1 in 10.

The former Delaware senator's big win in South Carolina also poses a challenge to former New York Mayor Michael Bloomberg, who jumped into the race in the belief that Biden was a weak candidate.

Bloomberg has splashed half a billion dollars on the race so far. Some party moderates fear he could siphon centrist votes away from Biden and open the door for Sanders.

Biden's victory represents the most significant triumph yet in a long political career that spanned highs — including his two wins on a ticket with President Barack Obama — and devastating personal losses, as he buried a wife and two of his children.

Saturday's result will underscore Biden's resilience after an uninspiring campaign that has included a string of sub-par debate performances, but that has also opened a window into the former vice president's humanity in interactions with voters who, like him, have suffered aching personal bereavements.

"All of you who have been knocked down, counted out, left behind -- this is your campaign," Biden said to raucous cheers in Columbia.

"We are very much alive."

Still, the former vice president may still have his work cut out in overhauling Sanders. While South Carolina may provide a preview of the several state contests on Tuesday, Alabama and North Carolina for instance, Sanders is favored in delegate-rich states like Texas and California.

The former vice president's victory will also spark intensifying questions about the viability of other candidates competing with him for the moderate lane in the Democratic primary.

Massachusetts Sen. Elizabeth Warren may also emerge from Super Tuesday primaries with no clear path to the nomination — given that Sanders is beating her among the most progressive voters.

Both Klobuchar and Warren are in danger of losing their home states to Sanders, who hopes to ride his coalition of young, liberal voters to multiple victories on Tuesday night. The Vermont senator has also made inroads with Hispanic voters over the last four years, as evidenced by his win in Nevada.

Sanders has insisted that he should emerge as the nominee if he wins a plurality of the votes. But other candidates have not ruled out an effort to thwart him at the convention in July.

Some party leaders are worried that Sanders and his "democratic socialism" is too extreme to win a general election. But depriving him of the nomination could convince his legions of liberal voters to stay home in November.

Biden told reporters Saturday morning he was in good shape in South Carolina, striking a balance between underlining the importance of the race and controlling expectations.

"All I know is I think I'm going to do well here, and I think that's going to put me in a position to do well in North Carolina and Alabama and other states in the Democratic primary," Biden said. "I think I can do well but I don't think it will even be over after Super Tuesday."

The writing was already on the wall for Sanders in South Carolina.

The front-runner was campaigning Saturday in Massachusetts and Virginia, already looking to Super Tuesday.

Trump, as is now his habit, flew to South Carolina on Friday night to goad the candidates and to underline his dominance in the state. He urged his supporters to vote for Sanders in the state's open primary. The President wants to create as much chaos in the Democratic race as possible and his campaign team sees Sanders as their preferred opponent in November.

Trump accused Democrats of seizing on the coronavirus, as examples of community transmission start to be discovered in the United States, as their latest "hoax" to damage him.

A picture of the President, alongside the state's two Republican senators, covered most of the front page of the "The State" newspaper Saturday, overshadowing they Democratic race.

UPDATE: This story has been updated with additional developments throughout the night.