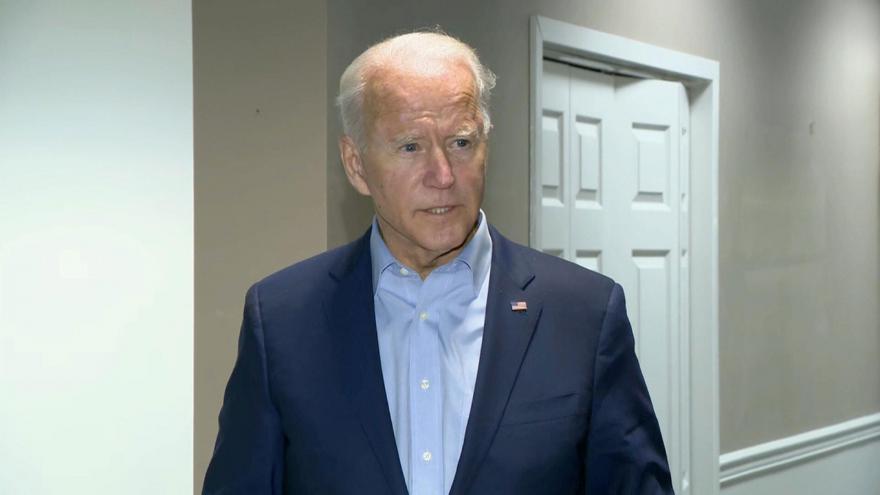 Presidential candidate Joe Biden makes a statement in reaction to the death of Ruth Bader Ginsburg on Friday, September 19.

(CNN) -- Democratic presidential nominee and former Vice President Joe Biden mourned the passing of Supreme Court Justice Ruth Bader Ginsburg on Friday and demanded that voters dictate the next president before her replacement is chosen.

"Tonight and in the coming days, we should focus on the loss of the justice, and her enduring legacy," Biden told reporters Friday night after returning to Delaware from a campaign event. "But there is no doubt, let me be clear, that the voters should pick the president, and the president should pick the justice for the Senate to consider."

With less than two months until the presidential election, Biden pointed to how "this was the position ... the Republican Senate took in 2016, when there were almost 10 months to go before the election."

In March 2016, then-President Barack Obama nominated Judge Merrick Garland to replace the late conservative Associate Justice Antonin Scalia after he died that February. At the time of Scalia's death, GOP leaders immediately said a nominee should wait for a new president to be elected, and Senate Majority Leader Mitch McConnell refused to advance Garland's nomination.

McConnell made clear Friday in a statement on Ginsburg's death that he would look to fill her vacancy before Trump potentially left office, stating that "President Trump's nominee will receive a vote on the floor of the United States Senate."

Biden called for the same standards used in 2016 to apply in selecting Ginsburg's replacement.

"That is the position the United States Senate must take today, and the election is only 46 days off," Biden said. "I think the fastest justice ever confirmed was 47 days, and the average is closer to 70 days. And so they should do this with full consideration, and that is my hope and expectation, on what will happen."

Biden isn't alone in pointing to the handling of the 2016 Supreme Court vacancy. Former Democratic nominee Hillary Clinton went after McConnell by name on Friday and called for his ouster in light of that nomination process.

"Presidents have a right to appoint judges to fill vacancies, and Mitch McConnell denied Barack Obama that right and that set in motion a series of events that I think did great damage to the Senate that can only be remedied by removing Mitch McConnell as the leader of the Senate," Clinton said.