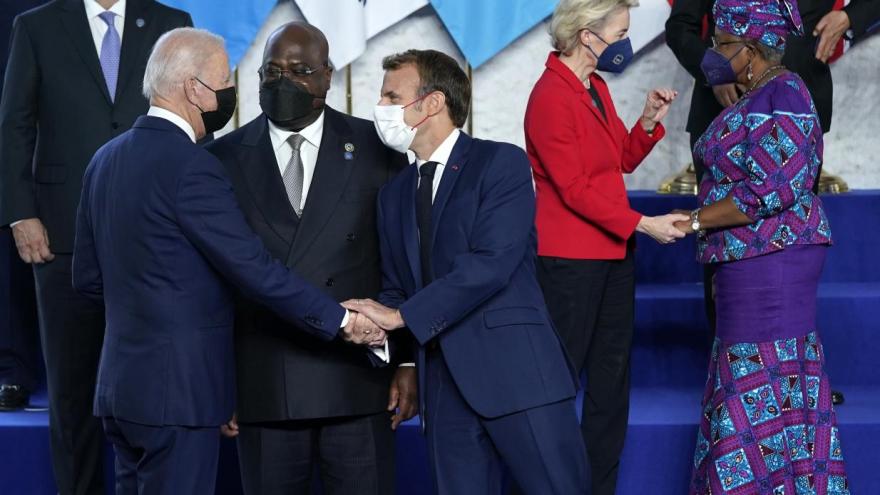 (CNN) -- President Joe Biden's first day at the Group of 20 Summit began Saturday with the President achieving one of his core objectives for the global conference -- an endorsement of a 15% global minimum tax from world leaders.

The tax is a chief priority of Biden's that the White House believes would end the global race-to-the-bottom on corporate tax rates. The new rule will be formalized when the leaders release a final G20 communiqué on Sunday, when the summit ends.

All leaders of the G20 came out in support for a global minimum tax during the summit's first session, a senior US administration official said.

"The President emphasized the importance of this historic deal during his intervention," the official said, referring to Biden's turn to speak during the meeting. "The President also mentioned that while we don't see eye to eye on every issue, we can tackle shared interests."

Each individual nation must pass its own version of the tax, and it may take some time to implement worldwide. One hundred thirty-six nations agreed to such a tax in October, and Saturday's endorsement from 20 of the world's largest economies is seen as a step toward worldwide implementation.

Italian Prime Minister Mario Draghi, the leader of this year's G20, said in remarks at the summit's start that the agreement was proof of the power of multilateralism.

"We reached a historic agreement for a fairer and more effective international tax system," Draghi said, adding, "These results are a powerful reminder of what we can achieve together."

The measure would tax large multinational companies at a minimum rate of 15% and require them to pay taxes in the countries where they do business. The Biden administration breathed new life into the global initiative earlier this year and secured the support of the G7 countries in June, paving the way for a preliminary deal in July.

"In our judgment, this is more than just a tax deal. It's a reshaping of the rules of the global economy," a senior administration official said.

Aspects of Biden's recently unveiled spending framework would enact part of the global minimum tax scheme, though the fate of that measure remains uncertain as Democrats haggle over timing. Biden administration officials have downplayed the effect that Democratic infighting has on Biden's ability to rally foreign leaders.

"These world leaders really are sophisticated. They understand. There's a complicated process in any democracy to do anything as ambitious as we're pursuing in our domestic agenda," the senior administration official said. "These are multigenerational investments and, of course, we're trying to reform the tax code to pay for it. And so, you know, I think there's going to be a broad understanding that takes time."

While the day started off with a win for Biden, he's facing a more skeptical global audience than he found the last time he trekked to Europe to meet with world leaders.

Divisions within Biden's own political party are threatening to derail his entire economic agenda back home, and Biden himself has acknowledged the credibility of the United States and the future of his presidency are on the line. Despite urging lawmakers to give him a legislative win to tout on the world stage -- especially the climate change measures that would give his presence at next week's United Nations Climate Summit extra weight -- Biden has shown up in the Eternal City without a done deal. Added to that complication are the questions coming from some nations about Biden's commitment to working cooperatively on global issues in the wake of the US' chaotic withdrawal from Afghanistan.

The President arrived at the summit site Saturday morning, stepping from his car and greeting Draghi. Biden posed for a family photo with the G20 leaders, along with Italian medical workers who joined the heads of state on the platform.

Biden spoke during the meeting and "reminded G20 Leaders that new pandemics can arise any time so it is important that we strengthen global health systems and do more to create the global health security infrastructure to make sure we are prepared against the next pandemic," the official said.

"The President stressed the need for balanced, well supplied, and competitive global energy markets so we don't undermine this critical moment of economic recovery," the official said.

The official said Biden also "underscored his commitment to ending the global pandemic and securing an inclusive global economic recovery, including by supporting developing countries through debt relief."

A separate senior administration official said on Friday Biden would stop short of getting directly involved in OPEC decisions about ramping up supply: "We're certainly not going to get involved with the specifics of what happens within the cartel, but we have a voice and we intend to use it on an issue that's affecting the global economy."

"There are major energy producers that have spare capacity," the official said. "And we're encouraging them to use it to ensure a stronger, more sustainable recovery across the world."

Energy policy was top of mind for the President in a meeting with German Chancellor Angela Merkel and Vice-Chancellor Olaf Scholz, Merkel's likely successor. Per a senior administration official, Biden "made the point that we need to see adequate supply of energy in this moment as we make the long term transition to a carbon free economy" during the sideline meeting.

The President is expected to hold additional bilateral meetings with world leaders while in Rome, though the White House has yet to make any firm announcements.