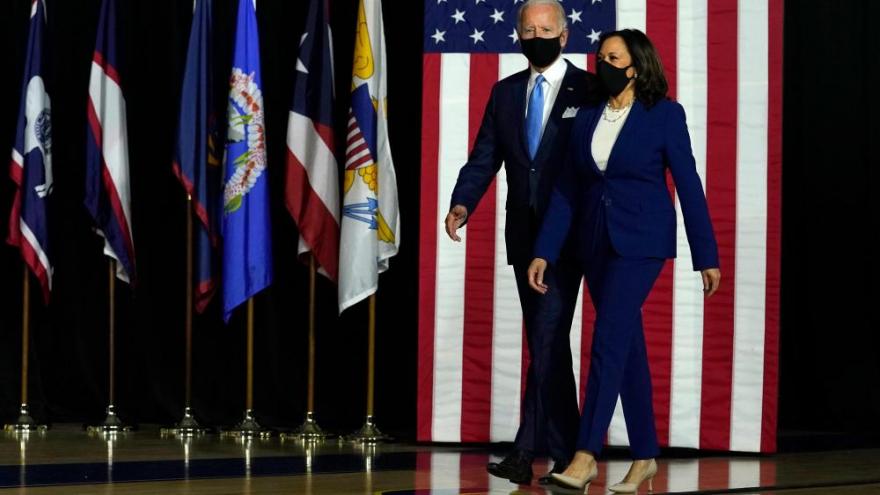 Joe Biden and Kamala Harris, seen here at Alexis Dupont High School in Wilmington, Del., Wednesday, Aug., 12, 2020, said Wednesday that they spoke to the family of Jacob Blake, the Black man shot in the back by police on Sunday.

(CNN) -- Joe Biden and Kamala Harris said Wednesday that they spoke to the family of Jacob Blake, the Black man shot in the back by police on Sunday as he tried to enter his vehicle in Kenosha, Wisconsin.

A video captured by a witness shows a police officer shooting Blake, 29, multiple times in the back from close range. Blake survived the shooting, but his father said Blake is paralyzed from the waist down, although he is unsure if the paralysis is permanent. Blake's three young children were in the car when he was shot, a family attorney says.

"I spoke to Jacob's mom and dad, sister and other members of the family, just a little bit earlier," Biden said in a video posted to Twitter. "And I told them: Justice must and will be done. You know, our hearts are with his family, especially his children. It's horrible what they saw, watching their father get shot."

The Democratic presidential nominee said, "What I saw on that video makes me sick. Once again, a Black man, Jacob Blake, been shot by the police in broad daylight with the whole world watching."

"Put yourself in the shoes of every Black father and Black mother in this country, and ask: Is this what we want America to be? Is this the country we should be?" Biden said.

Harris said at an event on Wednesday that she and Biden both spoke to the family.

A White House official told CNN efforts have been made to connect President Donald Trump with the Blake family. The President has yet to comment directly on the case, but officials have been waiting on more details from federal and state investigators who are looking into the case.

Protests have raged in Kenosha following the police shooting. Wisconsin Gov. Tony Evers on Tuesday declared a state of emergency, deployed members of the Wisconsin National Guard to Kenosha and implemented an 8 p.m. CT curfew. Buildings and cars in Kenosha have been set on fire, and two people were killed and a third was seriously wounded in a shooting during a protest.

Biden condemned the violent protests in his Wednesday video: "As I said after George Floyd's murder, protesting brutality is a right and absolutely necessary, but burning down communities is not protest, it's needless violence. Violence that endangers lives, violence that guts businesses and shutters businesses that serve the community. That's wrong."

After George Floyd died after a White police officer pressed his knee against his neck, protests against systemic racism and police brutality erupted across the nation.

Blake's family has called for healing and peace amid the protests. Blake's mother, Julia Jackson, said at a news conference that her son would not be pleased with "the violence and the destruction." She asked for prayers not only for her son but for healing across the country.

Biden said, "In the midst of this pain, the wisest words that I've heard spoken so far have come from Julia Jackson, Jacob's mother. She looked at the damage done in her community and she said this, quote, 'This doesn't reflect my son or my family.'"

"So let's unite and heal, do justice, end the violence, and end systemic racism in this country now," Biden said.

Blake family attorney Ben Crump called for prosecutors to arrest the officer who shot Blake. Crump, who also represents Floyd's family, told CNN that police have not given a reason for why they shot Blake.

Biden has called for an "immediate, full and transparent investigation" and for the officers to be held accountable.

This story has been updated with comment from a White House official.