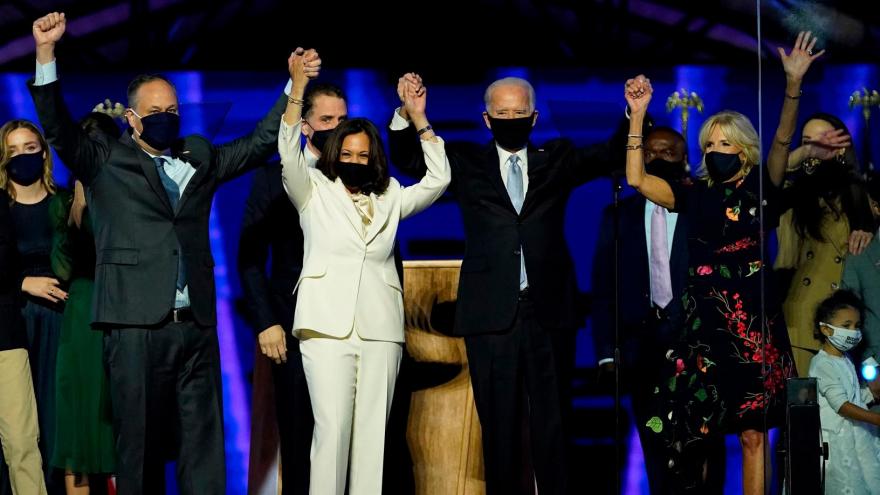 President-elect Joe Biden and Vice President-elect Kamala Harris have created a playlist for inauguration. They are pictured here after addressing the nation in Wilmington, Delaware.

The 46 songs feature artists from across the music spectrum to honor the 46th President taking the oath of office.

The playlist is part of the Presidential Inaugural Committee's push to provide opportunities for Americans to participate in the inauguration from home after the Covid-19 pandemic forced them to scale back traditional events, like the parade.

"During a tumultuous year that has kept so many loved ones apart, music has been a consistent vehicle that has kept us connected. Whether you are a country soul, a jazz enthusiast, a hip hop head, a classical sort, or just love that old-time rock and roll, music clarifies, inspires, unites, and heals," Presidential Inaugural Committee CEO Tony Allen said.

The result is an eclectic mix of artists, from Led Zeppelin and The Doobie Brothers to Kendrick Lamar, Sza and Major Lazer.

The Biden-Harris campaign's celebratory theme song, "Higher Love" by Kygo and Whitney Houston, is also in the mix.

"These songs and artists reflect the relentless spirit and rich diversity of America. They are the score to a new chapter and will help bring people together as the Biden-Harris Administration begins its important work to unite our country," Allen said.

Raedio President Benoni Tagoe said the company was honored to create the playlist. "We know that music has the power to bring people together, and after a year of national challenges and division, we hope this collection serves as an indication of a new beginning, positive change and a reminder that music of all types is a common language."

The Presidential Inaugural Committee is also producing a prime-time television special the night of the inauguration.

The special, hosted by Tom Hanks, is set to air live on ABC, CBS, NBC, CNN and MSNBC from 8:30 to 10 p.m. EST on January 20. It will feature performances from Jon Bon Jovi, who campaigned with Biden in Pennsylvania, Demi Lovato, Justin Timberlake and Ant Clemons.