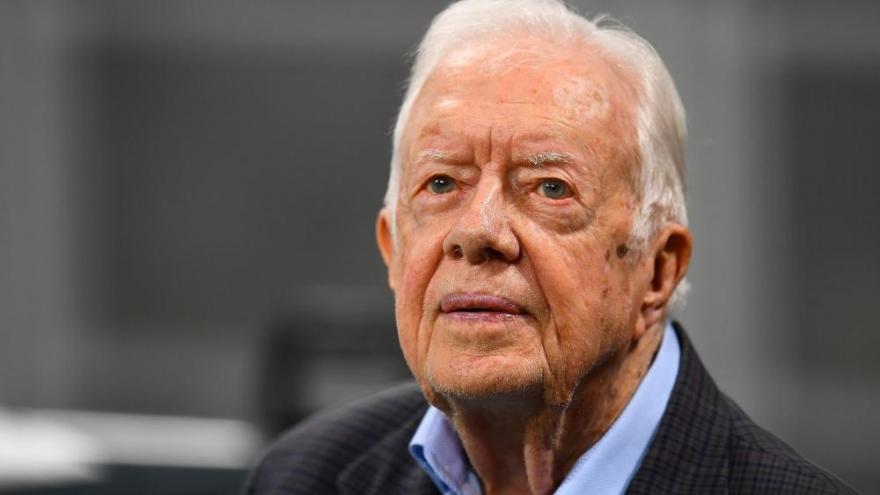 (CNN) -- Former President Jimmy Carter on Sunday quietly returned to his hometown church for the first time since his brain surgery last month.

The 39th President was seated alongside his wife, Rosalynn, in the first row during services at Maranatha Baptist Church in Plains, Georgia. Carter, 95, has taught Sunday school at the church, but earlier this month, the church announced Carter's lessons would be canceled and his niece, Kim Fuller, would give inspirational messages during his recovery.

The former president was released from Emory University Hospital in Atlanta just before Thanksgiving after spending more than two weeks there following a November procedure to relieve pressure on his brain. He was then hospitalized for a urinary tract infection and released from the Phoebe Sumter Medical Center in Americus, Georgia, earlier this month.

"He said he looks forward to further rest and recovery at home in Plains, Georgia. He and Mrs. Carter wish everyone peace and joy this holiday season," according to a statement from the Carter Center at the time.

Carter, who has survived brain and liver cancer, was also hospitalized twice in October and needed 14 stitches above his brow after his first fall, when he hit his forehead "on a sharp edge." He then received treatment for a minor pelvic fracture after his second fall.

Still, he has not let health complications slow him down. On the day of the first fall in October, he traveled to Nashville for the 36th Carter Work Project with Habitat for Humanity, saying building homes was his No. 1 priority.

Carter has attended Maranatha since he left the Oval Office in 1981. He began teaching Sunday school there several years later and has delivered more than 600 lessons at the church, members previously told CNN.

He celebrated his 95th birthday on October 1, becoming the oldest living former US president.