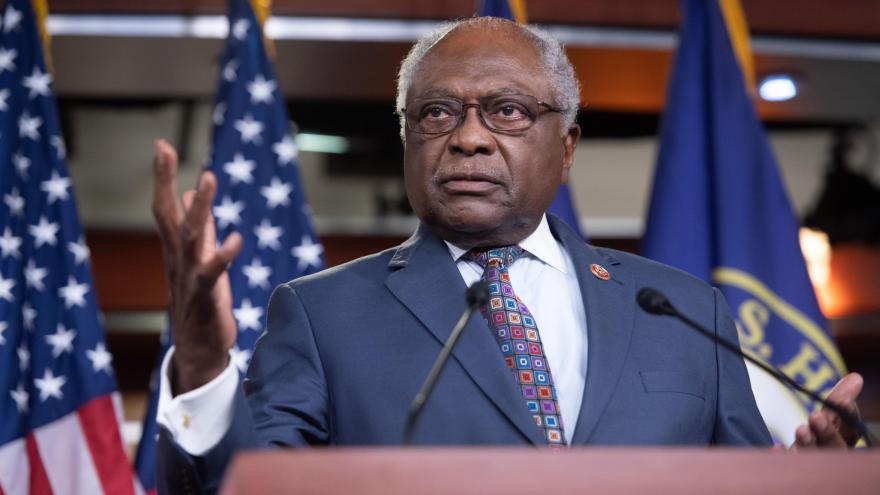 (CNN) -- House Majority Whip Jim Clyburn has been fined for violating the procedure of going through the metal detectors installed off the House floor, the first Democrat to receive such a fine.

The House Ethics Committee confirmed in a statement Friday that Clyburn had been fined, one day after the South Carolina congressman told CNN about the alleged infraction.

"Yeah," Clyburn told CNN on Thursday when asked if he had been fined. When asked by CNN what happened, Clyburn said, "I have no idea." He said he planned to appeal the infraction, a fact the Ethics Committee also acknowledged Friday.

"It's just somebody on the other side trying to cause mischief," Clyburn added without providing any evidence.

All members who avoid going through the metal detectors are fined $5,000 for their first offense and $10,000 for their second, a rule Clyburn supported that was instituted after the violent insurrection at the Capitol on January 6. These fines are deducted directly from members' salaries by the chief administrative officer.

Politico first reported that an incident against Clyburn's misuse of the metal detectors had been reported.

A source familiar with the matter told CNN on Tuesday that Clyburn was wanded down before entering the House floor to vote through an entrance that faces the Capitol Rotunda. According to the source, once Clyburn voted, he exited the House floor through a different door to use the bathroom located off the House Speaker's lobby. Upon returning from the bathroom, Clyburn walked toward his Capitol Police detail who were speaking with the officer stationed at the magnetometer by the floor entrance off the speaker's lobby. Clyburn then went around the metal detector with his security detail to return to the House floor, the source confirmed.

The source added that Clyburn did not refuse any orders upon returning to the floor and that he had gone through security less than 10 minutes before he left and returned through the Speaker's lobby.

A letter from the House Sergeant at Arms to Clyburn detailing the incident was also obtained by CNN.

CNN has reached out to House Speaker Nancy Pelosi's office and the Committee on House Administration.

Since the fine requiring members to complete security screening prior to entering the House floor was created, three Republicans have been fined and many have complained about the new rule.

This story and headline have been updated to reflect additional developments Friday.