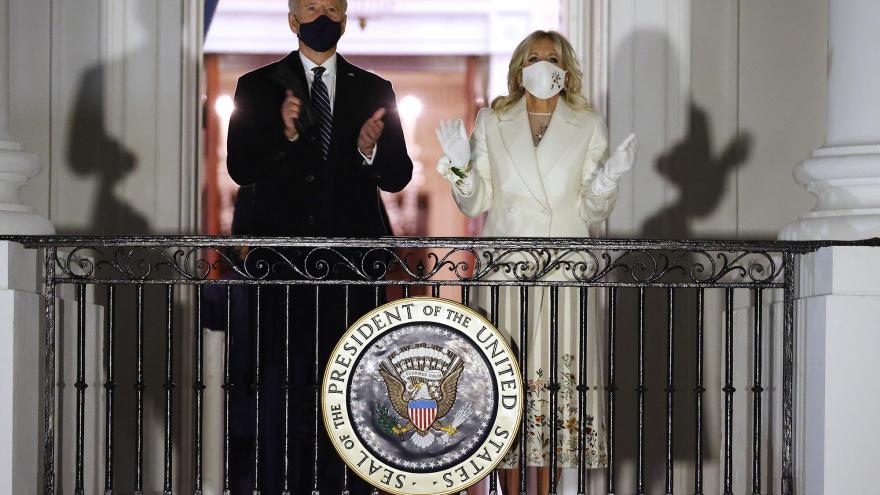 President Joe Biden and first lady Jill Biden watch a fireworks show on the National Mall from the Truman Balcony at the White House January 20 in Washington, DC. The first lady's inauguration gown was inspired by unity.

"Unity makes strength, and it is needed for the road ahead," Hearst said in a statement.

In his inaugural address, President Joe Biden repeatedly emphasized his commitment to bringing the country together in the wake of Donald Trump's divisive presidency.

"I've never been more optimistic about America than I am this very day. There isn't anything we can't do if we do it together," Biden said.

Jill Biden's cashmere coat featured embroidered flowers representing every state and territory, each flower taking approximately two hours to apply. The coat also has an embroidered quote from Benjamin Franklin on the lining, an homage to Biden's career as a teacher: "Tell me and I forget. Teach me and I remember. Involve me and I learn."

The dress under the coat also featured the embroidered state flowers, placed along the organza bodice and sleeves. The Delaware state flower -- the peach blossom -- was positioned purposefully above Biden's heart.

The dress and coat were both made in New York City's garment district, using materials that included existing available fabrics "to minimize the impact on the environment," said Hearst.

The dress and coat will be donated at some point to the Smithsonian's First Ladies' Collection, as most every first lady inaugural gown has been for decades.

Hearst's designs were often worn by Ivanka and Melania Trump over the last four years, even though Hearst was a vocal critic of President Donald Trump's administration and policies. Both Trump women bought Hearst's clothing off the rack.

"She looks great in the clothes which were purchased directly from a retail partner. Unfortunately, her husband's political stands do not align with our core values and belief. I am a woman and I am an immigrant," Hearst said when asked at the time about how she felt about Melania Trump wearing her designs.

In 2017, Hearst revealed a collection inspired by Kamala Harris and Tammy Duckworth and other female politicians.

Hearst is originally from Uruguay.