Jill Biden meets and tours school with the Duchess of Cambridge 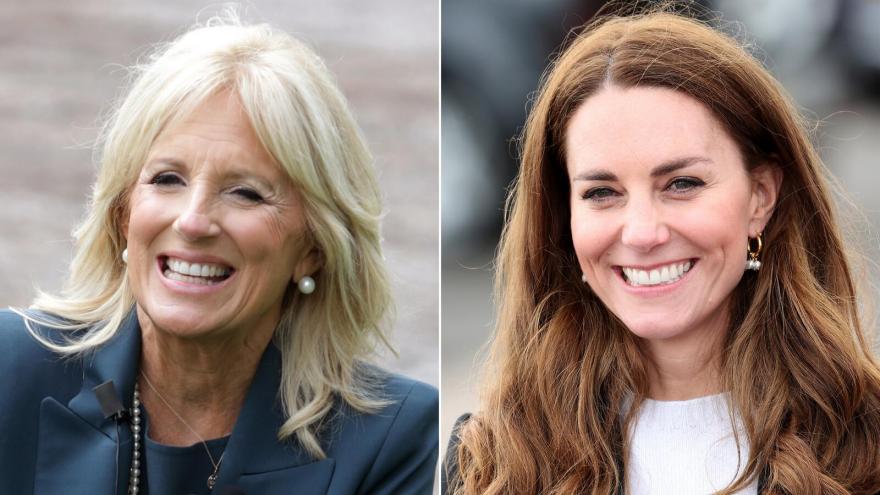 First lady Jill Biden will meet with Kate Middleton, the Duchess of Cambridge, this week while she is in England, Kensington Palace told CNN on June 10, as the first family makes their first international trip.

Jill Biden and the Duchess focused their meeting on children and education during their first-ever meeting, which took place at Conor Downs Academy, inside a classroom of 4- and 5-year-old students. Biden and the Duchess also participated in a roundtable discussion about early childhood education. A highlight of the visit included a tour by Biden and the Duchess of the outdoor area of the school, which included seeing bunnies the children help care for. The first lady carried a large bowl of carrots for the animals.

Inside the classroom, the two women chatted with the children, who were reading the book, "Greta and the Giant."

"Do you know this series?" the Duchess asked Biden, who replied she was familiar with the books. "I know Greta, of course," said Biden.

The first lady, who has had a decades-long career as a teacher and is currently a community college professor, was asked about the impact of early-childhood education.

"It's very important to the foundation," she said. "As a teacher at the upper levels, if they don't have a good foundation, they fall so far behind. This is amazing to see how far advanced they are."

Before departing the school at the end of their event, Biden and the Duchess were each presented with small bouquets of local flowers, handed to them by two of the school's students.

Kate, with her husband the Duke of Cambridge, Prince William, has taken a larger public-facing role in recent years in the United Kingdom, championing causes including mental health, the overall well-being of children, the importance of sports and visual arts, as well as the importance of getting the Covid-19 vaccine. She posted a photo of herself on her social media accounts receiving her first dose on May 29.

Biden has also taken several recent trips to various parts of the United States encouraging people to get vaccinated. The meeting in England between Biden and the Duchess has been in the works for the last couple of weeks, a White House official tells CNN.

The first lady is accompanying President Joe Biden for his first Group of 7 summit, which is being held in Cornwall from Friday to Sunday. The Bidens arrived in England on Wednesday. On Thursday, the President and first lady met with British Prime Minister Boris Johnson and his wife Carrie Johnson. Jill Biden and Carrie Johnson had a separate meeting over tea and a tour of St. Michael's Mount off the coast of Cornwall.

In a statement to CNN, the East Wing notes in addition to acting in a supporting role to the President, Jill Biden's first trip abroad as first lady includes several solo events, such as the one with Kate.

"The First Lady has an independent schedule of her own during the G7," said Jill Biden's press secretary Michael LaRosa. "At Royal Air Force Base Mildenhall on Wednesday, she spoke about the importance of supporting military families. She also hosted a roundtable with United States military spouses who are focused on the wellbeing and emotional health of service members and their families."

The President and first lady will also meet with Britain's Queen Elizabeth II at Windsor Castle on Sunday.

It will be the Queen's first major meeting with a world leader since the death of her husband, Prince Philip, in April, and comes after a year in which most of her in-person engagements were postponed or canceled because of the coronavirus pandemic.

Jill Biden will return to the United States after meeting the Queen.

While Jill Biden has for several years been friends with Prince Harry, whom she met in 2012 while second lady, she has not met other senior members of the royal family.