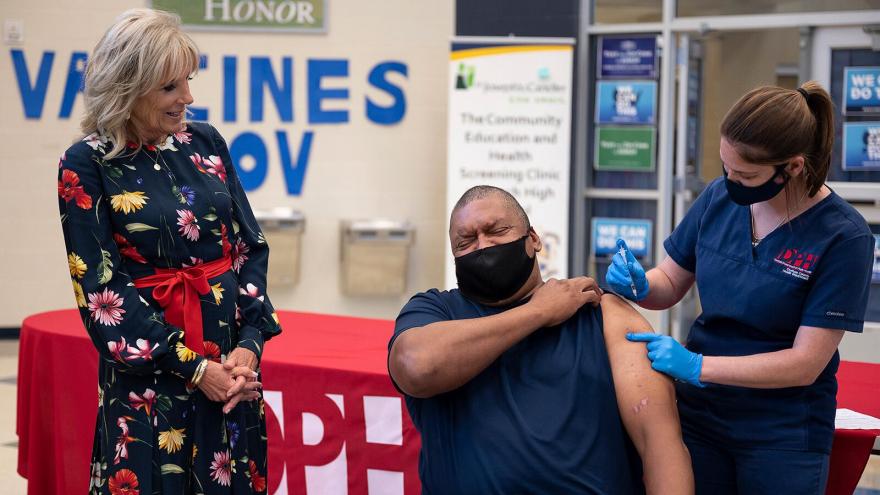 (CNN) -- First lady Jill Biden is back on the road, heading to parts of the country disenchanted, disaffected and -- perhaps -- disbelieving of the benefits of Covid-19 vaccines.

Biden has spent several days this summer crisscrossing the southern United States pleading with Americans to get their shots. It remains an open question if they're listening.

Biden's trip to Georgia Thursday came four days after the Fourth of July, the self-imposed deadline set by the Biden administration to reach 70% of American adults having received at least one Covid-19 vaccine shot -- a number missed by several percentage points. Still, the first lady did not see last week's goal as a stopping point.

"We have to do everything we can do," Biden said.

In Savannah, Georgia, on Thursday -- a state with just 37% of its population fully vaccinated, Biden visited a vaccination clinic at a local high school as part of a push to get students their shots before the start of the school year. When she is there, there are only three people in the school's cafeteria, which has been turned into a makeshift clinic -- the draw of the first lady of the United States not enough to muster even double digits.

Two of them are teenage girls with their mother, one is a middle-aged man who tells the first lady that some of his family members have gotten the shot, but some have not.

"Should I call them?" asks Biden, who doesn't appear to be joking.

Later, in the school's gymnasium, Biden tells a crowd of about 200 or so locals that earlier that morning at an exercise class near Washington, DC, the first lady was approached by a woman who told her she had lost four family members to Covid-19.

"She started to cry, telling me this story," said Biden, who went on to say the woman told her that the deaths inspired her to go out and personally get more than 140 people vaccinated.

As Biden's tour across states with higher vaccine hesitancy has gone on -- she's been to Alabama, Texas, Mississippi, Tennessee, Arizona, Florida, Missouri and West Virginia in recent weeks -- her message has grown increasingly more insistent; it now borders on anger.

"That's just not enough!" she said in her speech Thursday, when noting the low numbers of vaccinated Georgians.

The trips to the south are part of what the first lady calls the "team effort" to keep pressing Americans who have vaccination malaise to do something to protect themselves and their communities. On her plane Thursday, on the way from Savannah to Orlando -- where Biden attended part of the Scripps Spelling Bee finals -- the first lady said travel to states where vaccination hesitancy is happening won't stop just because July Fourth has come and gone, nor because the country has hit a wall with vaccination.

She knows she is now dealing mostly with Americans who see little point in getting the vaccine, ones who have already made up their minds not to get a shot.

"They're the ones thinking, 'Well, I haven't gotten sick so far,' or, 'It's not so serious,'" she told CNN in an interview Thursday, describing the mindset of many of the people she's trying to sway.

"As long as the Covid team asks me to go," she said when asked how much longer she will keep up her intense travel schedule of at least one trip per week to a state where vaccination numbers linger below the 40% mark. "Joe can't go that much, or too much, so I can go in his place," she added. "And what choice to we have?"

A Kaiser Family Foundation poll released last month showed there's still a large sector of American adults who are vaccine hesitant. About 20% of American adults said they will only get a shot if required to for work or other activities (6%) or will "definitely not" get vaccinated (14%).

As of Sunday, states with lower rates of vaccination reported an average of 6 new cases per 100,000 residents every day over the past week, according to Johns Hopkins.

States with higher vaccination rates reported an average of 2.2 new cases per 100,000 residents each day over the past week.

Biden has now logged thousands of air miles in the last month, visiting states most challenged by low vaccination rates. Measuring the impact of her visits -- which typically include a tour of a vaccination site and remarks telling people how safe and effective the vaccination is against Covid -- is not an exact science.

"We do check to see if the numbers [of vaccinations] go up after I've been somewhere," she said during Thursday's interview, though the metrics are not always calculable. "The [White House] Covid team circles back and we try to see the impact."

In short, no one really knows precisely whether the first lady's visits are working or not.

"At the end of the day, we can't take our foot off the gas," said Biden's press secretary Michael LaRosa, adding her travel will continue, with or without notable benchmarks or telling effectiveness in the wake of her trips. "She's an effective messenger, and she's going to keep up the travel."

Asked what exactly she hopes people will understand from her, Biden again goes back to the woman from the exercise class that morning, whose grief at losing four family members was clearly still on the first lady's mind.

"It was so sad, and I keep thinking about how upset she was," Biden said. "I want to make the point that people don't think they'll be affected. They think it won't happen to them, and then it does -- and then it's too late. I don't want them to take their health for granted."