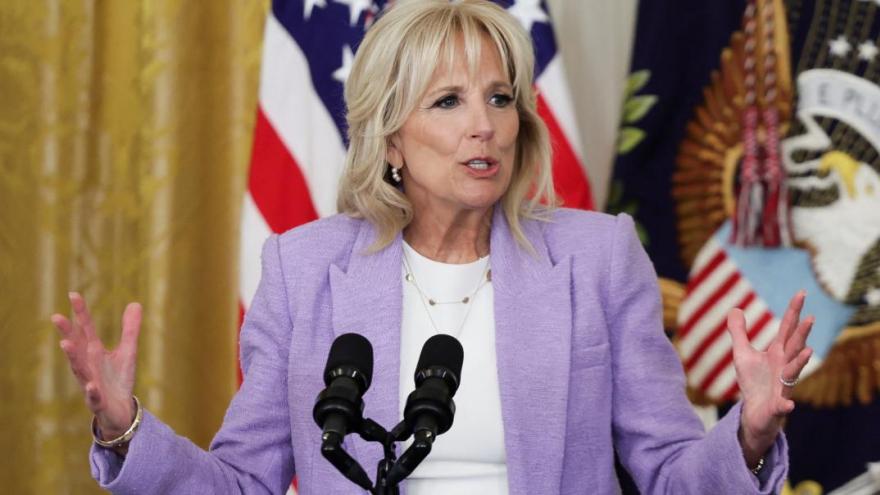 Jill Biden will travel to Romania and Slovakia to support Ukrainian refugees. The first lady here speaks in the East Room at the White House, in Washington, April 27.

(CNN) -- First lady Jill Biden will travel to Romania and Slovakia this week in a show of support for displaced Ukrainian families forced to flee in the wake of Russia's invasion. Biden will also use the trip to meet with members of the United States military stationed overseas, as well as top-level government officials in both countries, according to a release from the East Wing.

The first lady will depart Washington for Romania on Thursday, stopping first at Mihail Kogalniceanu Airbase on Friday, where she will meet with service members before heading to the capital city of Bucharest on Saturday. In Bucharest, Biden will hold meetings with members of the Romanian government, as well as humanitarian aid workers. Romania has seen the largest influx of Ukrainian refugees as a result of the crisis (after Poland), with hundreds of thousands of Ukrainians crossing the border into the country since the war began three months ago, according to the United Nations High Commissioner for Refugees.

Biden, a community college professor, will also spend time in Bucharest with educators who are helping teach displaced Ukrainian children and assist in their schooling as they adjust to their new environment.

On Saturday evening, Biden will travel to Bratislava, Slovakia, where she will meet with United States embassy staff before departing the following day for Kosice and Vysne Nemecke, Slovakia, to meet with Ukrainian refugees. Biden will also greet local Slovaks who have opened their homes to families from Ukraine seeking refuge. More than 350,000 Ukrainians have fled to Slovakia, according to UNHCR.

Biden wraps her trip on Monday, May 9, by meeting with members of the Slovak government before departing for the United States.

The trip will be the first lady's second solo foreign trip; in July, she went to Japan to attend the opening ceremonies of the Olympics.