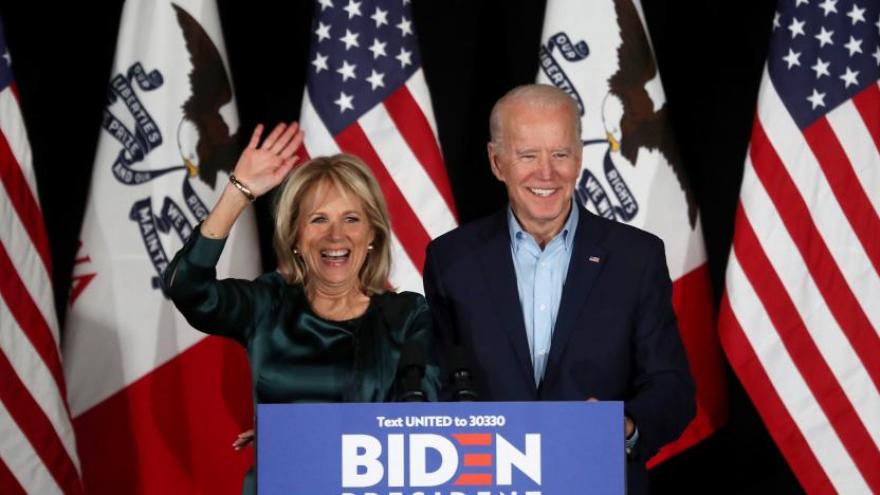 (CNN) -- Jill Biden is expected to speak in personal and optimistic terms as she makes the case for her husband, Joe Biden, as president on the second night of the Democratic National Convention, a source familiar with her remarks tells CNN.

"You're going to hear who she is and she's going to tell you about who Joe Biden is -- the father, the husband, the grandfather," the source said. "She's going to talk about what drives him to do this, what motivates him, but also the faith and values that guide him and the family."

Jill Biden will deliver her remarks live from Brandywine High School in Wilmington, Delaware, in the classroom where she taught English in the early 1990s, according to the source. Her teaching career has been central to her message during the campaign as she's talked about the need to lift up educators. She holds a doctorate in education from the University of Delaware, which she earned in 2007.

Tonight's speech is the biggest of Jill Biden's career and will serve to re-introduce the former second lady, who now hopes to step into the role of first lady, to the American public.

"You're going to see what kind of first lady she's going to be," the source said.

Jill Biden has often talked about how the role of political spouse has not come naturally to her, but was among the most active on the campaign trail during the Democratic primary. She honed her message and offered the most personal testimony to her husband's character and leadership style -- something she's expected to do once again on Tuesday.

"There are times when I couldn't imagine how he did it—how he put one foot in front of the other and kept going. But I've always understood why he did it...He does it for you," Jill Biden is expected to say in her speech about her husband, according to select remarks released by the Democratic National Convention Committee on Tuesday.

The former vice president has faced immense tragedy throughout his life, losing his first wife and infant daughter in a fatal car accident in 1972, and then his 46-year-old son Beau to brain cancer in 2015. Biden has said that he contemplated vacating the Delaware Senate seat he had just won when his wife and daughter died in 1972, but his decision to stay and serve became the foundation on which he built his political creed and public service.

With the backdrop of the classroom, Jill Biden is expected to make education a key part of her remarks on Tuesday, according to the source.

"Teaching is not what I do. It's who I am," Biden said in a tweet ahead of her Tuesday night speech.

She will speak to the anxiety and uncertainty felt by parents, students and educators across the country as they grapple with reopening schools safely and remote learning amid the coronavirus pandemic.

"You can hear the anxiety that echoes down empty hallways. There's no scent of new notebooks or freshly waxed floors. The rooms are dark and the bright young faces that should fill them are confined to boxes on a computer screen," Biden is expected to say, according to the remarks from the DNCC.

She is expected to say in her speech, "How do you make a broken family whole? The same way you make a nation whole. With love and understanding -- and with small acts of compassion. With bravery. With unwavering faith."

Jill Biden's central argument Tuesday evening will be that her husband is uniquely poised to mend the nation's ills after mending his own family following multiple personal tragic losses -- repeating the question, "How do you make a broken family whole?," according to a source familiar with her speech.

The source says Jill Biden will make no direct mention of President Donald Trump in her speech, a different approach than the one taken by former first lady Michelle Obama on Monday. Instead Jill Biden aims to draw a subtle contrast with the President as she talks about her husband's vision and character.

Joe Biden praised his wife during a virtual event Tuesday, encouraging viewers to tune in to the convention to hear her speak.

"I hope everyone tunes in the Democratic Convention tonight to watch my wife Jill speak. She's an educator and she never wanted to be a public speaker, but God love her, she has a backbone like a ram rod, I'm so proud of her," he said, adding, "She's going to make an incredible first lady."

Jill Biden has already committed to teaching if she becomes first lady, the second time she'd have to balance the official duties of a presidential administration with her personal career obligations.

"If we get to the White House, I'm going to continue to teach," she said in an interview that aired on CBS Sunday Morning. "I want people to value teachers and know their contributions and to lift up the profession."

It would not be the first time Jill Biden would have to balance official duties with her professional work. She taught English at Northern Virginia Community College during the eight years she served as second lady, along with working on initiatives to help military families.

Biden took a leave of absence from teaching this year as she campaigned for her husband.

"He's always supported my career. And this is a critical time for me to support him because, you know, I want change," she told CNN in January. "I want a new president."

"Teaching is not just what Jill does, it's who she is," Joe Biden says in a newly-released clip from a documentary about his wife. "Jill just simply cares."

On the campaign trail, the former second lady acted as a forceful surrogate for her husband, at times even pulling body guard duty, pushing advancing protestors away from Biden.

Jill Biden has said the role of political spouse did not come naturally to her, but during the Democratic primary, she was one of the most active spouses hitting the campaign trail. The Biden campaign deployed her to each of the early states, often as a closer for her husband's speeches as well as headlining events of her own, with the former second lady telling CNN she saw her campaign role as being a "partner" to her husband.

And as the vetting process intensified in the search for Biden's running mate, several of the potential picks appeared in virtual events with Jill Biden as she served as a sounding board for her husband in his decision making.

Jill Biden expressed her excitement for the ticket during a virtual event the week after the announcement.

"You know this has been such an exciting week for us. Biden-Harris. Joy is such a different thing during this time of a pandemic, isn't it?"

This story and its headline have been updated with excerpts of Jill Biden's speech.