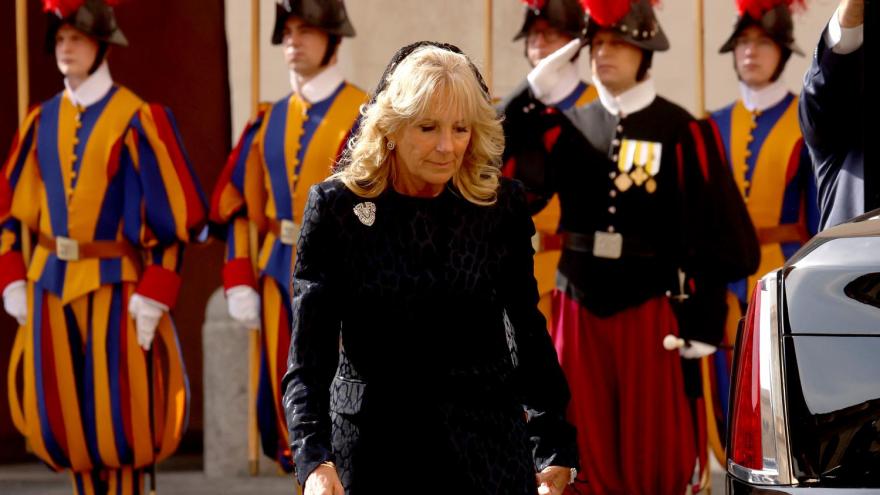 First lady Jill Biden arrives at the San Damaso Courtyard for a meeting with Pope Francis at the Apostolic Palace on Friday, October 29 in Vatican City.

(CNN) -- Six months after the death of their son Beau in 2015, Jill Biden and then-Vice President Joe Biden could not bear the thought of going to Nantucket, Massachusetts, for the traditional Biden family Thanksgiving.

Instead, she took the helm and decided to bring the family to Rome for the holiday, seeking refuge at the United States ambassador's residence, a source familiar with where she stayed at the time told CNN. For Jill Biden, Italy was a country where they could "escape," as she described it, and the familiarity of the religious symbolism also served as a comfort to the devoutly Catholic Biden family.

This week, Biden returned to the ambassador's Roman residence -- a 15th century estate called Villa Taverna -- this time as first lady of the United States, distanced several years from the tragedy of Beau Biden's death and determined to support her husband on his first Group of 20 summit trip as President. While he meets with leaders, discussing contentious topics such as the environment, global economics, possible threats from China and Russia and the pandemic, Jill Biden will handle a few diplomatic bilateral meetings of her own.

The first lady's family has deep roots in Italy, and the Italian culture has long played a role in Jill Biden's life. Her Sicilian ancestors are responsible for a historic note: She is now the first, and only, Italian American first lady of the United States.

Biden's maiden name is Jacobs, but before her great-grandfather emigrated to America -- arriving at Ellis Island -- it was Giacoppa. Guytano Giacoppa "Americanized" the family surname, as thousands of immigrants did, upon starting a new life in the United States.

The Giacoppas lived in tiny Gesso, Sicily -- a small village in the Messina province, which now boasts a population of fewer than 1,000 people. Her family's origin story contributes to her growing up with Italian influence, something Jill Biden has credited in several interviews as the impetus for large, Italian-style Sunday family dinners -- she has said the President likes her Angel hair pasta with fresh tomato sauce and her sons were partial to her chicken parmigiana.

The first lady's time in her ancestral homeland will be packed with meetings, and will include a visit to the families of American troops.

After an audience with Pope Francis on Friday -- to which she wore a black, leopard-print dress suit and a black lace mantilla down to her mid-back, attached to the back of her head -- Biden is scheduled for a Friday afternoon tea with Brigitte Macron, the first lady of France.

As she entered a café with Macron, the first lady told CNN her meeting with Francis was "wonderful. He was wonderful."

Following a glass of white wine with Macron, the first lady said their relationship was "like sisters."

Standing side by side with Macron outside the café, Biden said: "It was nice. Two friends together, just like sisters."

When asked whether she was enjoying Italy, she said: "We come here so many times. I love Italy. Brigitte loves Italy. I mean, who could not love Italy? There's nothing that we wouldn't love about it, right?"

While the two first ladies were enjoying an afternoon drink, their husbands were holding their first in-person meeting since last month's diplomatic dustup. The two first ladies have more in common than their husbands -- both are lifelong educators. A source familiar with the meeting told CNN ahead of the meeting that the women were likely to discuss their roles as first ladies in their respective countries, education -- bullying is of particular interest to Macron -- and common interests in culture, including greater access to the arts.

Prior to Macron, Biden was also expected to have a meeting with Maria Serenella Cappello, the wife of Italy's Prime Minister Mario Draghi. Cappello is known in Italy for being a relatively private and press-shy person, and the meeting with Biden will not be available to the media for coverage.

In addition to her one-on-one meetings, Biden is also anticipated to attend a spousal luncheon on Saturday, and a farewell luncheon on Sunday. She will go to the G20 formal gala on Saturday evening with the President, as well.

On Sunday, President Biden departs for Scotland and the COP26 climate summit, while the first lady remains in Rome until Monday, then departs for Naples, where she will make a stop at the United States military base. Biden will visit the Department of Defense Educational Activity School on the base.

"She will meet with high school students, tour several classrooms, and speak at a pep rally for the senior class," her press secretary Michael La Rosa tells CNN.

Following that time with military families, Biden is scheduled to fly home to Washington.