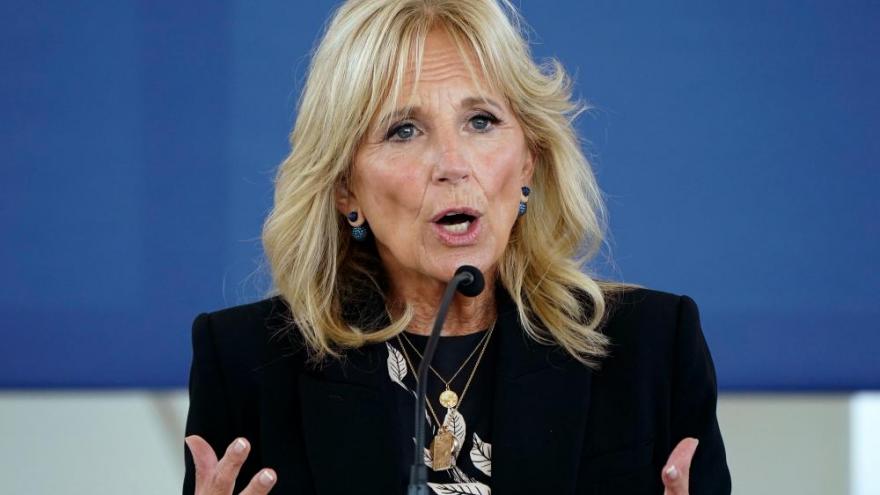 Dr. Jill Biden talked about how lost she was after Beau died. Biden is shown here during a visit to Des Moines Area Community College in Ankeny, Iowa.

(CNN) -- In May 2015, emotionally hobbled from watching her son, Beau Biden, fight and then succumb to brain cancer, Jill Biden said "goodbye" to God.

"After Beau died, I felt betrayed by my faith, broken," the first lady said Sunday during a publicly unannounced visit to Brookland Baptist Church in Columbia, South Carolina, where she spoke at a special service honoring the 50th anniversary of the church's pastor, the Rev. Dr. Charles B. Jackson.

Biden talked about how lost she was after Beau died, how her consistent and abiding prayers for him to live ended up not coming true, leaving her angry and distraught. "Chemotherapy, operation after operation, weight loss, still I never gave up," said Biden. "I kept going, every day, I put one foot in front of the other, and despite what the doctors said, I believed that my son would make it," Biden said of her unwavering belief in her higher power. "In the final days, I made one, last desperate prayer, and it went unanswered."

It was one of her most personal and extensive speeches about her faith, revealing how shattered it was during that dark time -- her voice breaking more than once recounting the details.

Biden said following Beau's death that she went so far as to ignore emails from her own longtime pastor in Delaware, who was beseeching her to come back to the flock, renew her trust in God and worship.

"But I just couldn't go, I couldn't even pray," said Biden. "I wondered if I would ever feel joy again."

Biden stayed away from regular church attendance for the next four years.

Until she made her first visit to Brookland Baptist.

In May of 2019, during a campaign swing through the Palmetto State, then-candidate Joe Biden and Jill Biden stopped to worship at a service led by Jackson.

That day, it wasn't necessarily the reverend who moved her to action, but rather his wife, Robin Jackson. "Robin came up to me, and she sat beside me and she said, 'Doctor Biden, I would like to be your prayer partner,'" Biden said, recounting the day for Sunday's assembled congregation of about 100 people, which included the Jacksons.

Biden would later say she wasn't sure at the time what exactly a prayer partner was, or what being one entailed -- whether it was some sort of pen pal or church buddy program -- but something about Jackson's kindness struck her. "I don't know if she sensed how moved I had been by the service. I don't know if she could see the grief that I feel still hides behind my smile," she said. But in that moment, for the first time since her son took his last breath, Biden said she saw a path to recovering her faith. Looking back, Biden said it was through Robin Jackson that she heard God telling her, "Okay, kiddo, you've had enough time. It's time to come home."

On Sunday, Biden and Robin Jackson sat next to each other on the same pew, masks on, reunited as prayer partners in person. Jackson wore a fuchsia suit, Biden a light blue one, and both had matching corsages of big, red flowers on their wrists. It was a homecoming of sorts, since Biden's chief communication with Jackson has been via text message. The two women exchanged words of support every Wednesday in the beginning of their relationship, according to Jackson's son, the Rev. Charles Jackson, Jr., who introduced the first lady at the service.

In an interview with the PBS NewsHour in August 2020, Biden was asked what she and her prayer partner actually do. "We got in touch. We pray together," was the simple answer. "We text one another a couple of times a week. She gave me back my faith," Biden said. Delving deeper on Sunday, Biden quoted scripture saying her renewed belief was possible only because Jackson decided it was time she no longer walked in sadness alone. "We can't heal ourselves alone," Biden said. "Robin's kindness, her mercy and grace, pushed past the callouses on my heart. Like a mustard seed, my faith was able to grow once again."

In January 2020, prior to Jackson's participation as one of 32 speakers from around the country to speak at Joe Biden's Inaugural Prayer Service, she said in an interview that her own faith was bolstered by her experience with Jill Biden and their weekly texts. "Jill would text me back, and I know she was too busy to text me back," Jackson said. "But she would always text me back, and say, 'Thank you, my friend. I needed that.'"

Biden's visit Sunday was kept a surprise for Robin Jackson. (Her husband, the reverend, was told -- but only because it is well known, say his friends, he does not like surprises, especially during his church services.) When Secret Service started to show up earlier in the day on Sunday, and police presence around the church increased ahead of Biden's arrival, Robin Jackson got suspicious. "She was told it was because Whip (Jim) Clyburn was coming," Michael La Rosa, Biden's press secretary, told CNN about how the rouse sustained itself. The South Carolina congressman and third-ranking Democrat in the House has a security detail and has been to the church before. The lie, though told in a house of worship, was a small one and made in good faith, La Rosa said.

When Biden arrived, she slipped into a private room, carrying a large bouquet of flowers made by florists in the White House florist shop, and surprised Robin Jackson.

After Biden spoke to the congregation, Jackson's son took the microphone and shared with a laugh how difficult it was not to tell his mother that Biden was coming to see her. "It took everything in us to keep it from her," he said, saying the visit was "no political ploy," but an "expression of love and friendship."

La Rosa says the first lady and Jackson still "keep in frequent touch," and most of the time it is still via text.

For Biden, the encounter with Jackson was much more than a chance to text a stranger and now newfound friend. The spark that restored her faith, she says, restored something larger, too. "It reminded me of what was at stake," Biden said Sunday. "Not an election, not a partisan battle, but a country in need of healing."

Biden once again attends church regularly. On Saturday, prior to her surprise trip to see her prayer partner, she and the President, who is Catholic, attended Mass at a church in Georgetown, something the couple does nearly every weekend whether in Washington, DC, or back home in Delaware. Closing her remarks the following day, Biden said that when she came back to her faith, and decided to believe in God again, she learned, "We not only find mercy, we find each other."