Jill Biden serves as her husband's emotional emissary over Ukraine 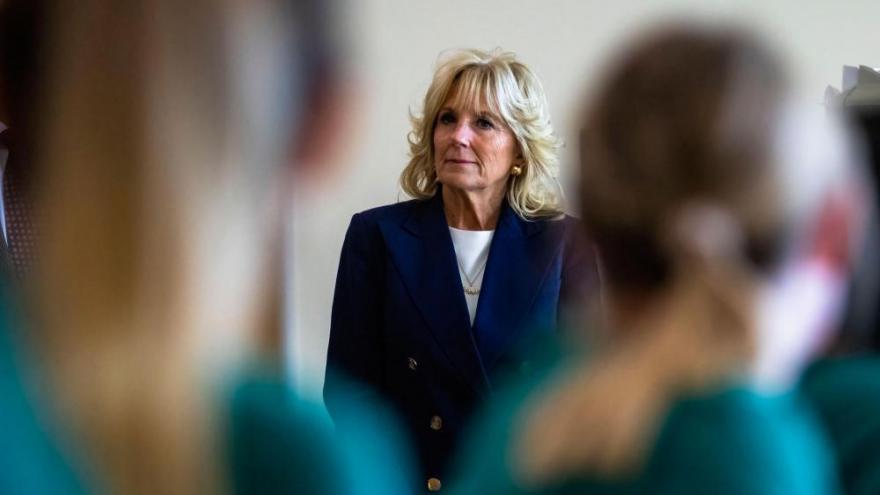 (CNN) -- In her hotel suite at the Intercontinental in San Francisco last weekend, Jill Biden spontaneously scrapped a prepared fundraising pitch she was set to give later that day.

There was something else on her mind -- Biden had awoken that morning to the news in Ukraine, growing ever more concerning as Russia escalated its attacks against civilians. She reached for a pencil, grabbed a pad of paper and started to write down her thoughts, according to two people familiar with Biden's activities.

The words she wrote down later ended up in a speech to benefactors at a private home in San Francisco's Pacific Heights neighborhood that was raw with the uncertainty of the moment.

"We don't know where it's going to go. We just don't know. And we're all just holding our breath, aren't we? That something, some answer will come so that we don't get into this world war. It's unbelievable, right? To think that that could happen in our lifetime," she said, the paper in front of her dabbled with handwritten margin notes and cross-throughs. "I just have to turn on the TV every morning and pray that Zelensky is still alive."

Both the call and the trip are being coordinated through the National Security Council, and no trip has been finalized or confirmed yet. But it would mark another high-profile visit amid the global effort to punish Russia for its invasion of Ukraine. Vice President Kamala Harris is in Romania on Friday following a trip to Poland.

CNN has reached out to the East Wing for comment on this story.

In Biden's San Francisco remarks at the private event, she expressed her concern for the people of Ukraine, and for her husband as he balances incoming information, decisions and negotiations.

"The phone just never stops ringing, all through the night," she said of the wee hours in the White House Executive Residence. "And Joe is up, trying to help solve this crisis."

Biden has the only 24/7 perspective on how the situation with Russian President Vladimir Putin and his invasion is affecting President Joe Biden. Unlike their predecessors, the first couple share a bedroom in the White House, and when there is a so-called "3 a.m. phone call," the first lady is up, too.

"Her biggest role is being his sounding board," said another person with knowledge of the Bidens' relationship, and his reliance on her advice and counsel.

The couple talk every morning, no matter where they are, often by telephone. The calls, the person said, can last several minutes and no topic is off-limits. Married for more than 40 years, those familiar with the first couple confirm to CNN that Joe Biden does not like to be apart from his wife for more than two consecutive nights; a three- or four-night stretch is sometimes unavoidable, but not preferable.

When she has to be away, the first lady is often serving as the President's emotional emissary, as she was in San Francisco, attending the memorial service of Richard Blum, longtime friend of the Bidens and husband to California Sen. Dianne Feinstein. However, on a three-day domestic trip this week, which took the first lady to Arizona, Nevada and Kentucky, Biden made a pivot to political and policy messenger, reiterating the themes of the President's State of the Union address.

She talked up the American Rescue Plan, childcare, education, job training and the cancer Moonshot. But Ukraine crept in.

Near Reno, Nevada, while touring a community college, Biden said during her remarks that she had constant concern for the people of Ukraine.

"This has just been so shocking to all of us," Biden said, before shifting back to her hype-woman role for her husband. "In the face of uncertainty, he is unshakable, and I hope you saw that in the State of the Union and when he was on yesterday when he was talking about the oil embargo."

But by Wednesday night, at her last stop of the trip at Fort Campbell -- the Army base in Kentucky that is home to the 101st Airborne -- Biden had almost entirely given up the pretext she should, or could, talk to the assembled military and their families about anything other than the war waging in Ukraine.

The first lady had tacked on the Fort Campbell stop as the finale of her trip at the last minute, after realizing many of the troops the President was planning to send to Poland, shoring up an eastern NATO ally, could come from this base. Many of the people she was speaking to at the barbeque event -- which attempted a festive mood, offering mac 'n cheese, pulled pork and chicken, green beans and salad -- had recently seen off loved ones for a deployment no one yet knows how long will last.

She also vocalized her distaste the Russian President.

"We are holding Putin accountable for his war through diplomacy with crippling sanctions. We are providing Ukraine with economic, humanitarian, and security assistance. And the Screaming Eagles are there in Europe, standing with our allies and welcoming Ukrainian refugees," she said, using the nickname and motto for the base's airborne division. "When you want it done, ask the 101!"

Biden's emotional and political pleas for support for her husband's policies and decisions as world watches in horror at the bloody invasion are just another curveball in her tenure as first lady. One year in and Biden has had to deal with almost unprecedented catastrophe: a global pandemic, a country divided over vaccine and mask mandates, economic decline and the slow trudge back to fiscal and functioning normalcy.

"There are moments when we suddenly realize that history is being written in front of us -- when we can almost feel ourselves cross the line that will divide our world into 'before' and 'after,'" said Biden at Fort Campbell. "This is one of those moments."