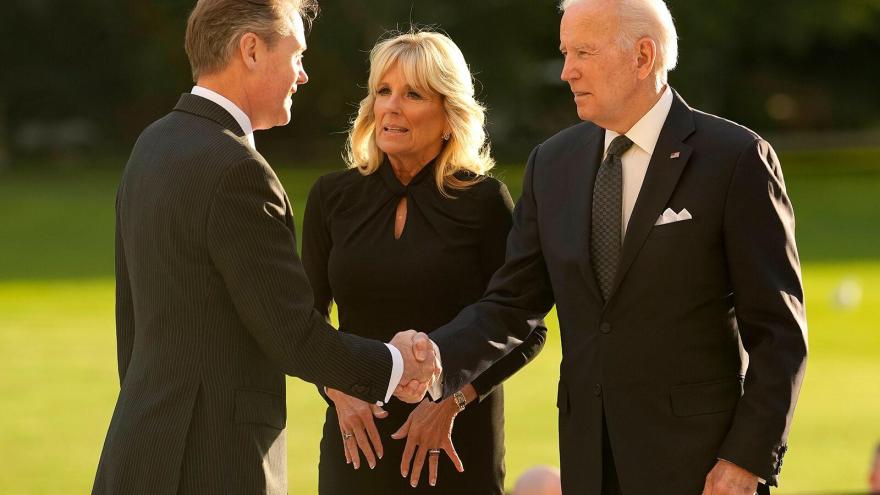 The Bidens are welcomed by Master of the Household Sir Tony Johnstone-Burt at Buckingham Palace on Sunday.

(CNN) -- First lady Jill Biden is overwhelmed by the outpouring of love and respect she is witnessing for Queen Elizabeth II during her visit to London with President Joe Biden, especially the viewing of the Queen's coffin at Westminster Hall, she told CNN on Sunday.

"It was really moving. We walked in there, Joe and I, near the coffin, the mourners were filing past," Biden told CNN in a phone interview. The first lady said she witnessed a young boy in a Boy Scout uniform walk past the coffin.

"He put up his three fingers and he gave the Queen a final salute, and just seeing that gave me a lump in my throat," she recalled.

Biden added she could feel the deep emotional toll the Queen's death has had on the people of the United Kingdom, noting that the "thousands and thousands" of people queuing to pay their respects was "an amazing sight."

Biden noted that she, too, would have stood in line for 24 hours if that's what it took to pay her respects to someone she loved, as many of Elizabeth's fans and admirers have done.

Biden also said the long-term planning for world leaders to attend these funeral events has paid off.

"Things are running on time," she said. "It's a pretty impressive operation."

Biden recounted her own personal interactions with the Queen through the years.

"She, of course, was Queen my entire life," said Biden. "I had met her after I had married Joe. I was young, I was a young mother, it was when Joe was a senator, we went over [to the UK] to meet the Queen. She was very warm then."

Yet it was the Bidens' private tea with her last summer that left the deepest impression.

"I loved her sense of curiosity," Biden said of the time they spent alone with the Queen. "She wanted to know all about American politics, so she asked Joe question after question."

The first lady echoed similar sentiments about that meeting as her husband did at the time, when he said the Queen had reminded him in a way of his own mother.

"We sat there in her living room -- that was really almost like being with your grandmother," said Jill Biden, revealing how the Queen insisted on getting up to pour the Bidens' tea.

Biden also shed light on the private reception hosted Sunday evening by King Charles III at Buckingham Palace for the many dignitaries, royalty and world leaders in attendance.

Biden said King Charles and Camilla, the Queen Consort, were there, as were the new Prince and Princess of Wales, but Prince Harry and his wife Meghan, Duchess of Sussex, were not. Asked if she had spoken at all with Harry since the death of his grandmother, Biden, who has known Harry and supported his Invictus Games charity for a number of years, told CNN, "No, I have not."

Biden said her conversations with King Charles and the royal family at the reception were strictly about the Queen.

"We really talked about the woman, and who she was, and what she meant really to the whole world," said Biden, adding that she noted to Charles the human toll of grief.

"He is the King, but, you know, no one should forget he lost his mother, and Prince William lost a grandmother, and sometimes we tend to forget the really human piece there, and the sorrow they have to bear -- and how they have to grieve in public. But ... they seem to be doing OK."

As for her lasting impression of the Queen, Biden said that in addition to "how warm and gracious she was to me and Joe," it would be the impact she had on the entire world, which Biden said she is witnessing first-hand.

"Now that I've met with everybody at the reception -- how many heads of state, kings and queens came to be here to honor her and represent their countries," said Biden. "Just as Joe and I feel honored to represent the American people."