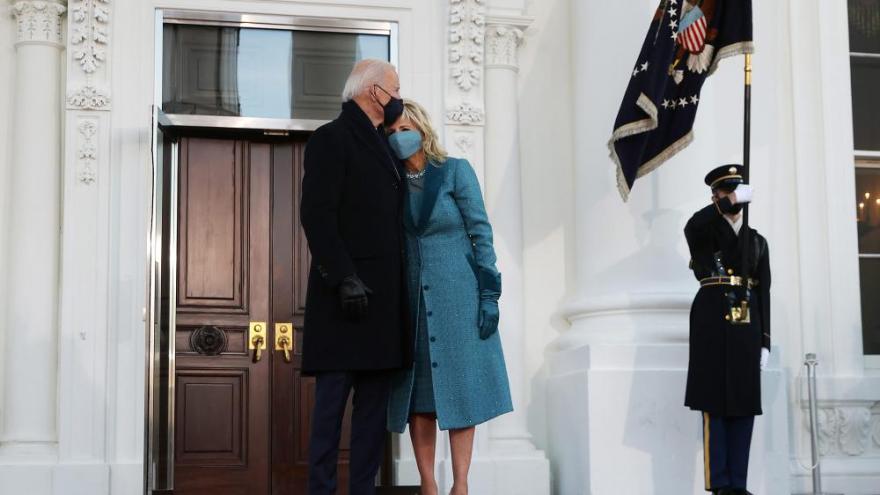 US President Joe Biden and First Lady Dr. Jill Biden embrace at the White House after Biden's inauguration on January 20, 2021 in Washington, DC. Biden became the 46th president of the United States earlier today during the ceremony at the U.S. Capitol.

(CNN) -- As the season changed from summer to fall, first lady Jill Biden has found a spot to sit outside at the White House to grade her students' essays.

"On these cool afternoons, I like to go to the Jackie Kennedy garden," Biden said Thursday night at a gala to honor the 60th anniversary of the White House Historical Association.

Her nod to one of the most iconic first ladies was a fitting tribute to the association's founder, Jacqueline Kennedy Onassis, in whose namesake patch of green the current first lady enjoys taking in "the burgundy oaks and maples blazing over the grounds," she said. The dinner was held at the Metropolitan Museum of Art in New York City, a location that is also an homage to Kennedy, the White House Historical Association President Stewart McLaurin told CNN.

"She was helpful in getting the Temple of Dendur given as a gift (to the Met) from Egypt after the United States helped save it from being flooded by the Aswan Dam," he said, referring to a famous ancient artifact housed at the Met that was annually drowned by floods created by an Egyptian dam built in the early 20th century. "And she also facilitated having (Leonardo da Vinci's) the Mona Lisa there from Paris."

It was Kennedy's dream to have the White House reflect America's own icons and, in 1961, she established the association -- a privately funded, nonprofit organization that is not politically affiliated. At the gala dinner, Kennedy's daughter, Caroline Kennedy, gave remarks, recounting a letter her mother sent to her close friend Bunny Mellon -- who would later become the designer of the White House Rose Garden -- the day after the presidential election.

"The most terrible thing has happened," Kennedy wrote to Mellon. "Jack has won. We have to move into the White House. How dreary. All those curtains."

In time, Kennedy would become a champion of 1600 Pennsylvania Avenue -- perhaps her most important legacy being the association that preserves America's house.

The White House Historical Association very much remains the keeper of the White House, its artifacts and objects, symbols of grandeur and its ability to be both home to the leader of the free world and a museum of American history open to the public. The association also supports myriad educational and informational programs and has overseen several books on topics ranging from White House china services to the architecture of the building.

Since Kennedy's founding, the White House Historical Association has worked in concert with 12 first ladies, many of whom take up the banner of preservation from her predecessor. The White House Historical Association does not just protect and preserve older items already in the collection, it also works to purchase items that have either historical value, or more modern necessity.

"Most projects we undertake, particularly major acquisitions, require the support of -- or the ideas of -- each first lady," says McLaurin, who has worked during his tenure with Biden, Melania Trump and Michelle Obama. "We are just beginning our work with the Bidens and I'm sure they will undertake important projects as all others have."

Asked which first lady worked most often "in the trenches" with the White House Historical Association, McLaurin pointed to Pat Nixon, "perhaps the one most unappreciated," he said.

"We acquired more for the White House collection during that presidency than any other," he added.

Due to the Covid-19 pandemic, the White House has not been open to the public as much as it was before the virus took hold, but McLaurin says the association has still affirmed its support for $1 million in non-taxpayer funding for annual maintenance of the White House collection and upkeep of the public rooms to museum standard. A million dollars per year is about average for these sorts of things, he says, but the funding would be increased if there is a large acquisition for the collection or the undertaking of a major refurbishment or renovation project.

In 2020, for example, during Melania Trump's tenure, the White House Historical Association purchased a sculpture by Isamu Noguchi -- entitled "Floor Frame" -- that was installed at the east end of the Rose Garden. A representative for the association confirmed to CNN at the time that the Noguchi sculpture was purchased at auction for $125,000.

'We're beginning to feel at home'

The history of the building hangs heavy within its walls, Biden said Thursday.

"Room by room, in marble mantles and timeless portraits, we can trace the steps of the women and men who walked the White House floors -- whose decisions rippled across the world," the first lady said in her Thursday remarks to donors and supporters at the gala.

"And yet, in the shadows and slants of light, we can imagine those intimate moments that affected only those who felt them. The letters written in sitting room corners. The tumbling first steps of a grandchild or leisurely games of fetch with dogs on the South lawn. The soft sounds of bedtime stories, floating down the hall."

Biden noted her family has taken advantage of living at the White House to celebrate private moments, including a granddaughters' college graduation in the Blue Room and the 40th birthday in June of her daughter, Ashley Biden, in the Rose Garden. There are rumblings there will also be a Biden family White House wedding at some point in the next year -- 27-year-old Naomi Biden got engaged in September.

The first lady added she had picked out a swing set to be placed on the grounds for her youngest grandson, not yet two years old.

"We're beginning to feel at home -- like so many families before us," said Biden, who noted how crucial it is that what is inside the White House is much more than furniture and paintings. Biden said she is still overwhelmed each day by the idea that she lives in such an important place, and at times contemplates the balance of it being where she resides and where history lives.