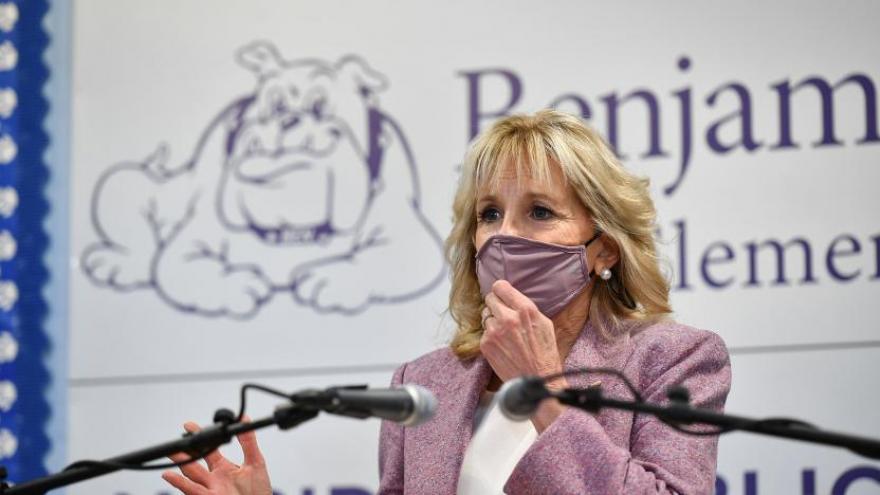 US First Lady Jill Biden cancels trip to Alabama with Jennifer Garner due to severe weather in the South. Biden is seen here speaking at a school in Meriden, Connecticut, on March 3.

(CNN) -- A scheduled trip to Alabama by first lady Jill Biden on Friday was canceled Thursday evening after deadly tornadoes swept through the state.

Biden was to have been accompanied on her visit to the cities of Birmingham and Jasper, Alabama, by actress Jennifer Garner. A statement from the East Wing said the trip was being postponed "due to severe weather across the South and tragic loss of life in the state of Alabama."

"Thinking of everyone in Alabama and all of those impacted by the severe weather across the South tonight. My prayers are with the grieving families. Please stay safe," the first lady said in a tweet.

Biden and Garner were slated to talk up the American Rescue Plan as part of the administration's ongoing "Help is Here" tour, with a specific focus in Alabama on issues associated with childhood poverty, according to a statement from the East Wing.

This would have been Biden's third solo trip as part of the tour, having already held events in New Jersey and New Hampshire.

At least five deaths and multiple injuries have been reported in Calhoun County, Alabama, after a tornado passed through the area Thursday afternoon, Calhoun County Sheriff Matthew Wade told CNN.

Seven tornadoes have been reported in Alabama, according to the National Weather Service, and authorities have reported extensive damage in the Birmingham metro area.