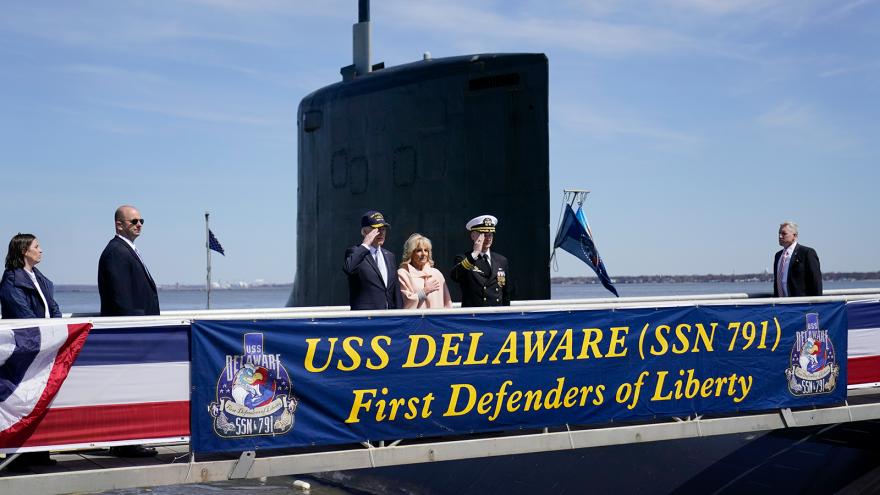 (CNN) -- First lady Jill Biden brought to life the USS Delaware in a commissioning ceremony for the Virginia-class submarine at the Port of Wilmington on Saturday.

"It's difficult to put into words how much it means to be a part of the USS Delaware family. It's an incredible honor that I take seriously. I have cherished getting to know this community," said Biden, the fast-attack submarine's sponsor. "I've seen the heart of this crew, and it makes me feel both proud and humbled to be your shipmate for life."

Biden officially christened the boat back in 2018, smashing a bottle of champagne across its bow during a ceremony at a Virginia shipyard, which Delaware Democratic Gov. John Carney fondly recounted on Saturday: "That bottle just exploded, it was something to behold." Biden was named the boat's sponsor during a Pentagon ceremony announcing the future vessel's name in 2012, when her husband was vice president.

A ship's sponsor, according to the Society of Sponsors of the US Navy, is named by the secretary of the Navy and is someone who participates in the ship's important milestones, such as its commissioning, decommissioning and christening. The sponsor also has a "lifelong" relationship with the ship, its crew and their families.

Due to the Covid-19 pandemic, the USS Delaware was administratively commissioned underwater in April 2020, a first for the Navy, according to Navy Secretary Carlos Del Toro, who noted Saturday that "a great ship, a great crew and a great state deserves this great moment in the sun." Saturday's celebration represented the ceremonial commissioning of the ship, which is the seventh US Navy vessel to be named after the First State.

The US Navy has been procuring Virginia-class submarines since 1998 at a cost of $3.45 billion per boat, and the first entered service in October 2004, according to the Congressional Research Service. The nuclear-powered Virginia-class is capable of tracking and sinking enemy ships, launching Tomahawk missiles that can reach targets a thousand miles away, as well as operate in shallow waters and conduct reconnaissance missions or deliver special forces like Navy SEALs.

"Jill has watched over the progress of the USS Delaware for years," President Joe Biden noted in his brief remarks Saturday introducing his wife to the 1,100 people gathered in the Delaware sunshine for the day's proceedings. "She always holds our military and their families in her heart. And that is not hyperbole, that's real."

Jill Biden is not the only first lady to sponsor a Navy submarine.

Near the end of her remarks, the first lady took a moment to remember the Bidens' late son Beau, a former Delaware attorney general, sharing a prayer she recalled saying every night while he was deployed to Iraq. As she spoke, the President appeared to become emotional and could be seen brushing something away from underneath his aviator sunglasses.

Following their remarks, the President and first lady took a tour of the submarine and posed for a group photo with its crew.

While not the focus of today's events, the ongoing war in Ukraine and high tensions with the Kremlin were on the minds of some who spoke.

"While we certainly hope that this USS Delaware will see nothing but calm waters, the events in Ukraine remind us that liberty still needs her defenders," said Carney, the Delaware governor.