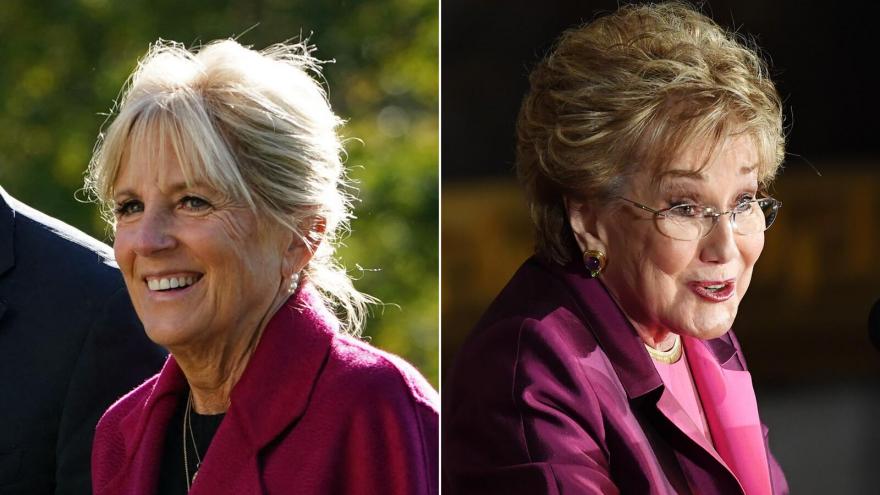 Biden joined former Sen. Elizabeth Dole, Defense Secretary Lloyd Austin and Veterans Affairs Secretary Denis McDonough for the event -- the day before Veterans Day -- to shine a light on the families who support those who served and sacrificed.

It comes as a new report from Mathematica, commissioned by Joining Forces, the Elizabeth Dole Foundation and the Wounded Warriors Project, has studied the impact of caregiving on service members' families and children.

Approximately 2.3 million American children under 18 live with veterans with disabilities, the study's analysis of data from the American Community Survey found, many of whom experience major disruption to their everyday lives and other negative outcomes. A copy of the study exclusively obtained by CNN outlined the ways in which children in military caregiving homes can take on additional responsibilities. Children in military caregiving homes, the report said, "can get lost in their family's response to the needs of the care recipient."

That leads to high reported levels of health problems, including stress, burnout and fatigue, feelings of isolation, difficulty expressing emotion and difficulty learning at school, and anxiety and depression.

"From a young age, hidden helpers learn the costs of war close up. You see how difficult the road to recovery can be. You know the reality of changing bandages or long stays in hospital rooms. You get tired of having to be brave. And there's no way to, you know, keep you from feeling sad sometimes. So no, we can't shield our caregiving kids from the reality of war or its aftermath, but we can recognize the costs, that they last long after our troops come home, and that injuries can be felt throughout generations," Biden said Wednesday.

The report made four key recommendations: encouraging the development of tailored programs and interventions; funding, promoting and creating support for the entire family; raising awareness through national campaigns and coalitions so that Americans can understand the needs of children in military caregiving homes more broadly; and partnering with federal and local agencies to reduce barriers to health care and other services supporting those families.

Biden told the children present in the White House East Room on Wednesday that she and the President see them, stand with them and will support them.

"We're here to thank you for everything you do to help out at home, all the extra chores that you take on and the times you watch your brothers and your sisters. We know you need a break sometimes, and that you need to be around kids and teachers who understand what you're going through, without needing to explain it. We're here to honor the sacrifices that you've all made -- the time you've missed with friends or moments maybe you feel just a little lonely because you feel like your family is different. And, most of all, we're here to tell you that you aren't 'hidden' any more. You're not alone," she said.

Biden continued, "We are going to work to live up to the example of courage and duty that you all set every day."

"These commitments will make a real difference in the lives of our caregiver kids. But these commitments are only the beginning. We need the rest of the nation to join us," Dole said at the event.

Dole, a former senator from North Carolina whose namesake foundation is aimed at supporting military caregivers, has been a vocal supporter of Biden's Joining Forces initiative.

"At a time when so many of us have been left to wonder what can heal our country's hardening divisions, Dr. Biden is poised to show us," she wrote in an op-ed for Military.com earlier this year.

CORRECTION: An earlier version of this story incorrectly stated who published the report. It was published by Mathematica.