Jerry Falwell Jr. says he has resigned as president of Liberty University 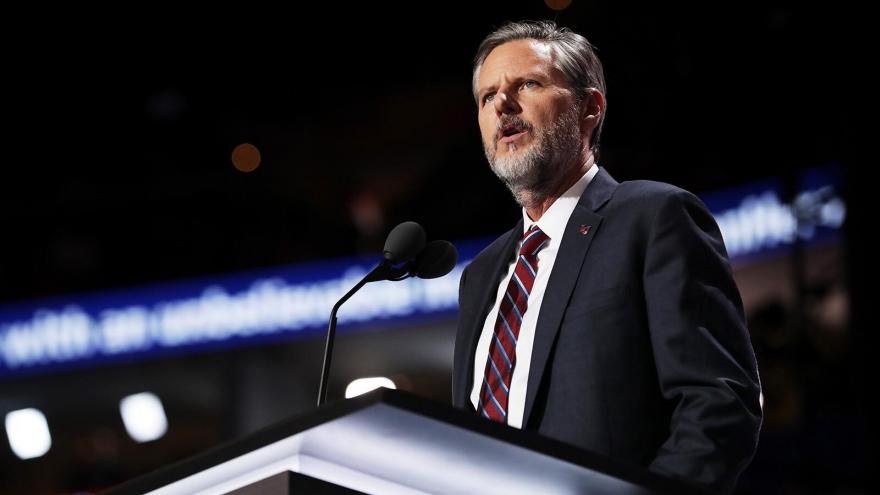 Jerry Falwell Jr., delivers a speech during the evening session on the fourth day of the Republican National Convention on July 21, 2016, at the Quicken Loans Arena in Cleveland, Ohio.

(CNN) -- Jerry Falwell Jr. has resigned -- again. And this time he and Liberty University agree.

The embattled evangelical leader said he has resigned as president and chancellor of the Christian school, a day after reports that Falwell and his wife took part in a sexual relationship with a former hotel pool attendant.

Falwell's departure from the school his late father founded comes after a tumultuous 24 hours filled with conflicting reports about his fate. On Monday, the evangelical Christian university in Lynchburg, Virginia, said Falwell had agreed to resign as Liberty's president but then withdrew his resignation later that day.

Falwell in recent years has been one of the country's most prominent evangelicals and was an early and ardent supporter of President Donald Trump. The son of the Rev. Jerry Falwell, who died in 2007, Falwell Jr. raised the school's profile -- and finances -- considerably as president, aiming to make Liberty the evangelical version of Notre Dame University.

The school now boasts a $1.6 billion endowment and its board of trustees, in accepting Falwell's recognition, praised his business acumen. During his time as president, according to the board, Falwell oversaw more than $1 billion in construction projects, transforming its campus into one with "world-class academic buildings and athletics facilities."

Falwell also helped raise enrollment to more than 100,000 students, including both residential and online students, the Liberty board said.

"The university's heartfelt prayers are with him and his family as he steps away from his life's work," Liberty said Tuesday in a statement.

But the last few months brought a series of public controversies about his behavior. On Monday, a young Miami man went public with allegations that he was involved in sexual activities with the Falwells from 2012 until 2019. The man, Giancarlo Granda, told CNN that Falwell frequently looked on while Granda had sex with Falwell's wife Becki.

In a statement, Falwell Jr. acknowledged the affair but said that he was "not involved."

"I am now dealing with things in a way that I should have done before," he said, "including seeking to address the emotional toll this has taken."

Falwell's statement about the affair was issued on Sunday, a day before Reuters published a report detailing Granda's intimate relationship with Becki and Jerry Falwell Jr.

Granda, 28, later confirmed the details of his relationship with the Falwells to CNN.

He declined to answer further questions on the record but told Reuters that his relationship with the Falwells soured because he wanted to dissolve his ties with the couple and fell into a business dispute with them.

Falwell, in his statement, claimed Granda was trying to blackmail him and his wife. Granda denies the charge.

In a statement Tuesday, Granda said he was not profiting by coming forward. "In his effort to lie and discredit me, the Falwells are exposing to the world why I felt it was important to step forward and tell the truth about them. The fiction they are peddling in an effort to save themselves is on par with the kind of victim-shaming tactics we've come to expect from people who have abused their positions of power and authority."

The sordid back and forth added new depth to Falwell Jr.'s remarkable fall from grace at the school founded by his late father. In June, he apologized after deleting a much-criticized tweet that showed one person in black face and another in a Ku Klux Klan hood and robe.

On August 7, Liberty University's executive committee said they asked Falwell Jr. to take an "indefinite leave of absence" after he posted a photo on Instagram that showed him with his pants unzipped and his midsection visible. In the photo, Falwell is holding a cup of dark liquid and has one arm around a woman whose shorts are also unzipped.

In a radio interview soon afterward, Falwell Jr. said the woman was his wife's assistant. He said the pair were at a costume party and "it was just in good fun," but added he should never have posted the photo and said, "I've apologized to everybody and I promised my kids I'm going to try to be a good boy from here on out."

He told CNN on Tuesday via text message, "My contract did not allow the board to put me on leave for posting a picture of my belly and the board graciously accepted that fact and accepted my resignation."

Falwell Jr. was one of the first evangelical leaders to endorse Trump when he ran for president. Conservative politicians lined up for the opportunity to address the student body at the Lynchburg, Virginia, school, and one GOP candidate announced his run for president there four years ago.

He remained a strong supporter after the President took office in 2017, irking some Liberty students and former employees who believe Trump doesn't share their values.

Monday was the first day of fall classes at the university, which was founded in 1971.