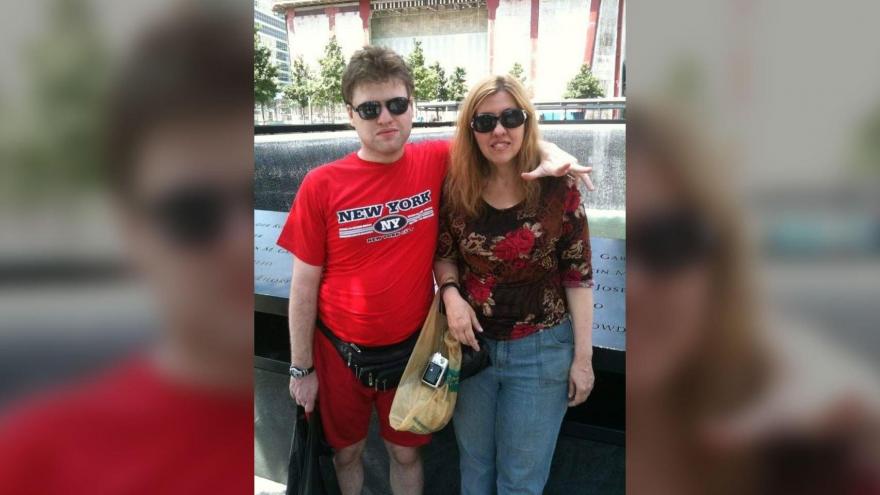 Debbie Stevens managed to arrange a phone call with Alex Trebek for her son, a huge fan of "Jeopardy."

Learning about Trebek's struggle with pancreatic cancer crushed her son, said Debbie Stevens, a pulmonary fibrosis survivor from Brooklyn. She decided to arrange a call for the two of them so her 32-year-old son, Michael Kneeter, could wish Trebek well.

The search began about a month ago with Stevens on a mission to track down Trebek. "I'm a very driven person," she told CNN. "I can't take 'no' for an answer." She said she knew it was important for her son to speak to Trebek, since Kneeter lost his father to cancer 15 years ago.

During her research, Stevens found that Trebek's son, Matthew, owns a restaurant in Manhattan. She called the Mexican eatery, Oso, and told an employee she needed to speak to Matthew Trebek, and that it was personal.

Stevens kept the conversation light, and Kneeter joined, telling Matthew, "I hope he (his father) feels better." Stevens was persistent and followed the call with a get-well card she sent via certified mail, this time kindly requesting that Alex Trebek connect with them, as "it would thrill my son."

A week and a half later, on October 18, Alex Trebek did call -- but Stevens was in the bathroom and missed it. He left a voice message:

"This is a message for Michael. My name is Alex Trebek. It is Friday at about 6:00 your time. My son Matthew, who has a restaurant in North Harlem, told me that you and your mom had been in contact and you're fans of the show, and I just wanted to thank you for that, and I appreciate it. I hope you're well. And maybe someday, if you manage to get to Los Angeles, you could come to a taping of the program. That would be great. Hopefully I'll still be around hosting it. OK. You take care."

In tears, Stevens called Matthew Trebek at the restaurant. He told her to stay near the phone and that he would text his father. Soon after, Alex Trebek, 79, called again and spoke with Stevens and Kneeter for seven minutes.

"It wasn't rushed," Stevens said of the call. "He was really concerned and caring for Michael."

Trebek asked Kneeter, who has high-functioning autism and epilepsy, what his hobbies are, to which Kneeter responded, "bowling." Trebek said he wasn't good at bowling. He then asked about Kneeter's siblings -- Kneeter is the fourth of five children.

Kneeter told Trebek that he and his mother saw him at a taping of "Jeopardy!" in Madison Square Garden in 1999. Trebek said he's happy and that he remembered that show. He said Kneeter is a very smart young man and that he's happy to talk with them, recalled Stevens.

Both Kneeter and his mother ended the call by telling Trebek to get better and that they love him. Trebek told them he's going to keep fighting.

"It was incredible how he reached them," Kneeter's eldest sister, Lisa Stevens, 38, said. "It was very heartwarming that under the circumstances Alex Trebek is going through, he was able to reach out to one of his biggest fans following his show for many years."

Trebek, who has been hosting the famous game show for 35 years, announced in March that he was diagnosed with stage 4 pancreatic cancer.

"I get these kinds of calls quite often now, where somebody who has special needs feels that they would be helped by talking to me, and it's no great imposition on me, to tell you the truth," Trebek told CNN. "If I'm in a position to do it, I do."

Of disease survivors, he said, "They're looking for some kind of reassurance I think, and if I can provide that I'm happy to do it. The message I try to get across to all of them is, let's agree to be survivors against whatever ailment is afflicting us."

When asked how he's coping with his own health and struggle with cancer, Trebek said he is "hanging in," and on continuing to host "Jeopardy!" he replied, "Oh yeah, still doing my thing."